Cyclone batters fishing hub but veers away from Indian coast

A cyclone in the Arabian Sea battered an Indian fishing hub with heavy wind, waves and rain Thursday and was forecast to bring dangerous weather conditions even as it veered away from the subcontinent's western coast.

The India Meteorological Department said Cyclone Vayu, named after the Hindi word for wind and the season's second major storm, was moving parallel to the coast of the western state of Gujarat, unlikely to hit it head on as previously forecast but instead turn toward the center of the sea.

Pakistan warned of rough seas and dangerous heat, though the cyclone wasn't expected to directly hit the port city of Karachi.

In anticipation of the storm, rescue workers evacuated nearly 300,000 people, taking a cue from Cyclone Fani, which came ashore on India's eastern coast in May, killing 34 people in India and 15 in neighboring Bangladesh.

An unprecedented evacuation effort that involved relocating about a million people ahead of Fani was credited with saving many lives.

Though not as severe as Fani and unlikely to make landfall, Indian authorities cautioned that Vayu could leave dangerous conditions in its wake. Evacuation efforts continued Thursday.

"We have alerted people from 70 villages and are trying to tell others to evacuate as well. There is a chance that the storm will pick up pace and become stronger now," Gujarat state minister Jawaharbhai Chavda said.

In Veraval, a hub of India's fishing industry, heavy wind and rain from Vayu battered the beaches. Fishing boats were splintered by huge waves crashing onto shore. Local police were making a last-minute appeal to hut dwellers to leave their homes.

A blanket of steady rain came down in the coastal city of Porbandar, the birthplace of Indian independence leader Mahatma Gandhi. Though 100 kilometers (62 miles) offshore, Vayu was whipping Porbander with winds up to 60 kilometers (37 miles) per hour.

Pilgrims entered a seaside Hindu temple undeterred by waves crashing against the exterior in the coastal city of Dwarka, which Hindus believe is the center of Lord Krishna's kingdom.

With the worst averted, rescue workers, including 50 teams from the National Disaster Relief Force and around 1,000 Indian navy and army personnel, were searching for any villagers who remained in coastal areas to urge them to relocate to school buildings and other designated evacuation sites.

People were piled into flat-bed trucks and buses and driven away from the shore.

Khatma said no deaths or injuries had been reported.

Pakistan's meteorological department warned fishermen to stay on land this week as the cyclone could cause rough sea conditions.

The cyclone was not likely to directly impact the southern port city of Karachi, but the department said the weather system could cause dust storms and rain in various parts of the southern Sindh province.

It said a heatwave was likely to hit Karachi on Thursday and Friday because the cyclone could stifle sea breezes, with temperatures rising to 42 degrees Celsius (108 degrees Fahrenheit).

The meteorological department also asked authorities to remain alert through Saturday, even if Cyclone Vayu remained far away from the country's coastal areas.

Authorities have evacuated nearly 300,000 people from India's western coastline ahead of a very severe cyclone that's expected to make landfall as the year's second major storm.

The India Meteorological Department says Cyclone Vayu, named after the Hindi word for wind, could glance the western state of Gujarat Thursday afternoon before returning to sea. 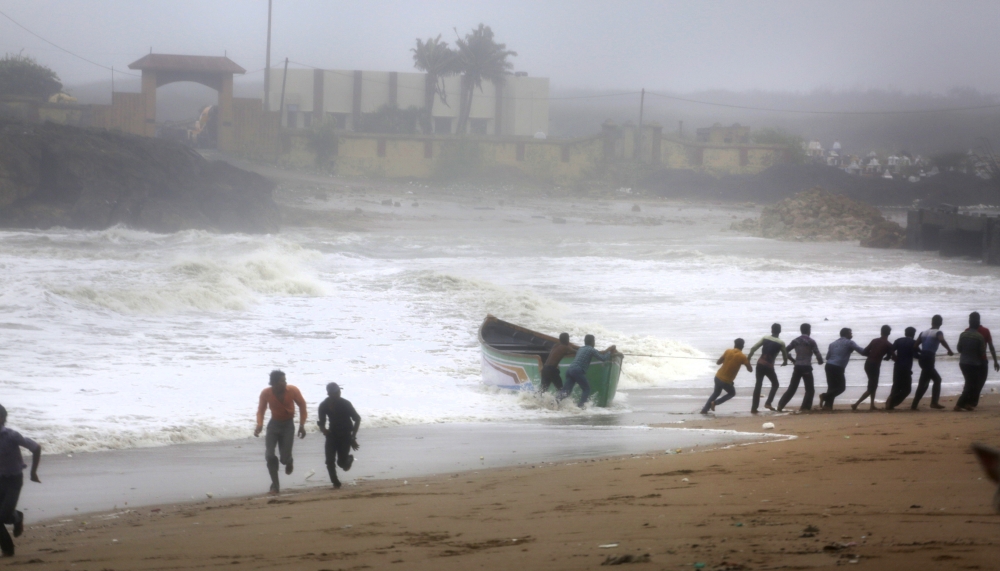 In Veraval, a hub of India's fishing industry where Vayu was expected to touch down, heavy wind and rain battered the beaches early Thursday. Fishing boats were splintered by huge waves crashing onto shore. Local police tried to convince hut dwellers to leave their homes.

Gale winds up to 180 kilometers (112 miles) per hour and rough sea conditions could last up to 12 hours in the cyclone's wake as it moves west toward Pakistan.

Indian authorities are bracing for a severe cyclone strengthening in the Arabian Sea that's set to make landfall in the western state of Gujarat as India's second major storm of the season.

The India Meteorological Department said Wednesday that Cyclone Vayu was due to hit the Gujarat coast early Thursday with winds gusting up to 170 kilometers (106 miles) per hour.

By contrast more than a million people were evacuated ahead of Cyclone Fani, which hit India's eastern coast on the Bay of Bengal in May, killing 34 people.