The death toll from a cyclone that battered India's eastern coast has reached 33, a disaster official said Sunday, as authorities assessed the damage caused by the powerful storm.

Cyclone Gaja, which packed winds of up to 120 kilometres (75 miles) per hour, had barrelled into Tamil Nadu state after hitting the coast on Friday.

Thousands of trees were felled by winds that destroyed homes and hundreds of thousands were forced to flee to shelters.

"So far 20 men, 11 women, and two children have died due to the cyclone," said an official with the state disaster management authority, who asked not to be named as he was not authorised to speak to media.

"As of now 177,500 people are housed in over 351 camps. Thousands of trees have been uprooted and livestock has also been badly affected," he told AFP.

Chief Minister Edappadi Palaniswami, who has announced compensation of $14,000 each to the families of victims, said most deaths were caused by flooding, house collapses and electrocution.

Hundreds of emergency workers have been pressed into service to restore roads and power cables, as the full scale of the disaster becomes clear.

A Navy helicopter and two ships have joined relief efforts in the state, the local government said. 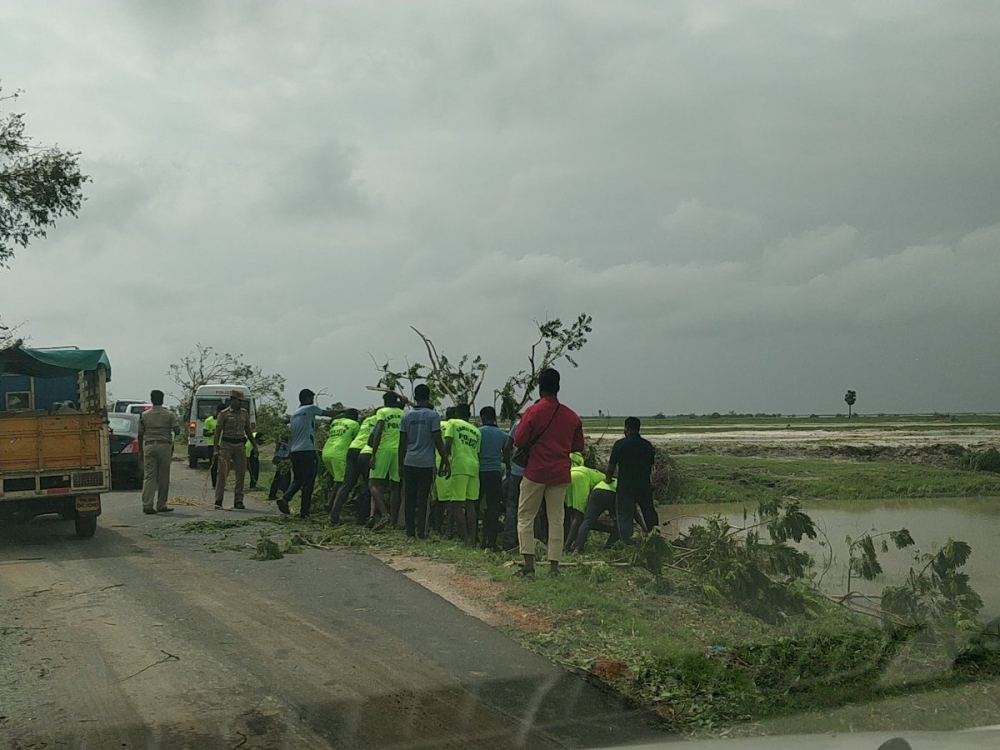 India's weather department said the cyclonic depression had moved westwards Saturday into the neighbouring Kerala state before continuing into the Arabian Sea.

A cyclone hit the coast of southern India on Friday, killing at least 13 people, damaging homes and forcing the evacuation of more than 80,000 residents.

People living in low-lying areas had been taken to more than 470 relief centers in six districts, and fishermen were warned to stay away from the sea.

The storm felled trees and power lines, and authorities preventively disconnected the electricity supply to the worst-hit areas to prevent electrocutions. Schools were closed in places, and vehicles remained off the roads in most parts of Nagapattinam and Karaikal districts, the Press Trust of India news agency said.

Nagapattinam district bore the brunt of the cyclone with a rainfall of 15 centimetres (6 inches), the local weather office said.

The cyclone destroyed or partially damaged nearly 1,600 mud huts and uprooted more than 5,000 trees in the area, state authorities said.

Tamil Nadu state is prone to cyclones that develop in the Bay of Bengal. In 1999, a cyclone killed more than 15,000 people in eastern Orissa.