Heavy machinery has been brought in by rescuers in southern Spain who plan to drill vertical tunnels next to a deep borehole to reach a 2-year-old boy trapped there for five days.

“The terrain’s geology is complicated, and that’s slowing down the works,” said Angel Garcia, the leading engineer coordinating the search-and-rescue operation, on Friday.

Spaniards are holding their breath with every setback in the against-the-clock race to reach Julen Rosello, who fell into the 110-meter (360-foot) deep waterhole on Sunday.

Unable to go down the narrow shaft, rescuers used machinery first but found a blockage some two thirds of the way down and are now trying to drill alternative tunnels to reach the boy.

Authorities say there are hopes Julen could still be alive if there is enough oxygen under the obstruction. 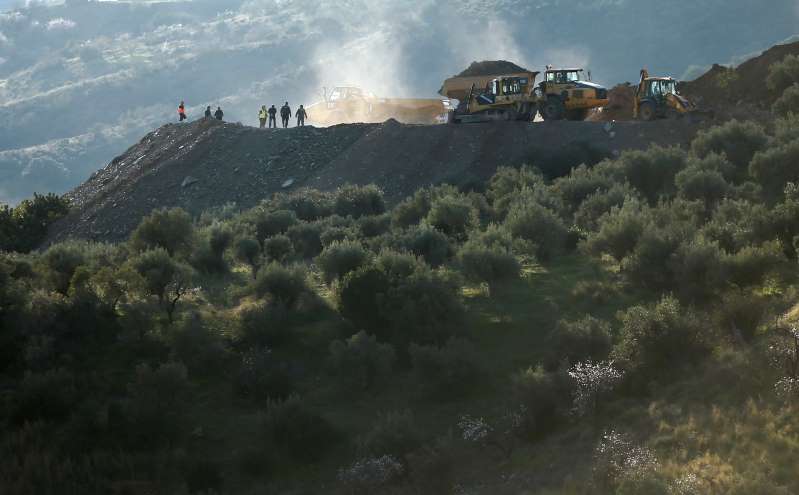 Search for Spanish toddler in well runs into problems

The search for a toddler who fell down a well in Spain in a tragedy that has gripped the country ran into problems on Thursday as rescuers raced against time to find the boy alive.

Julen Rosello, who is two, fell down a very narrow shaft more than 100 metres (330 feet) deep on Sunday while playing as his parents had lunch nearby in the town of Totalan near Malaga, family members said.

"We're putting all our efforts in going as fast as possible but I want you to know there are huge difficulties," Angel Garcia Vidal, the engineer coordinating the work, told reporters on the fifth day of rescue operations.

He added that under normal circumstances, the type of excavation work being carried out to try to get Julen out would take "months."

Rescuers are for now unable to get to where they believe the child is as a layer of earth, sand and stones believed to have been dragged down by Julen when he fell have blocked the well.

The toddler is believed to be underneath and the discovery of several strands of his hair by rescuers appears to confirm that theory.

But no one knows if Julen is still alive.

Garcia said there was ventilation in at least the upper half of the well. "Beyond the blockage there may be some or not," he added.

We're "dead, but with the hope an angel will help us get him out alive," Julen's father Jose told reporters on Wednesday.

The rescue operation is unprecedented in Spain given how difficult it is.

Rescuers are digging two tunnels, one parallel to the well and another at an angle further underground aiming to reach Julen.

But the work is complicated by the state of the soil.

Engineer Juan Lopez told reporters that the vertical tunnel was progressing "for the moment without too many problems."

But the horizontal one is causing "problems," he added. Excavating that tunnel "within less than two days is really complicated," he said.

Among the nine companies taking part in operations is Stockholm Precision Tools AB, a Swedish company that in 2010 contributed to the spectacular rescue of 33 Chilean miners trapped 69 days underground.

This race-against-time recalls several other high-profile cases in the 1980s.

Alfredo Rampi, an Italian boy, was found dead in a well near Rome in 1981 while Jessica McClure, an 18-month-old girl, was rescued alive from a well in Texas in October 1987 after more than two days inside.