The spectacular fireworks at Burj Khalifa to usher in 2016 have proved that Dubai can overcome major obstacles successfully - and in record time - and progress steadfastly towards its goal.

The fire at The Address Downtown Dubai hotel last night broke out at 9.30pm. It was fully under control in record time to allow the breathtaking fireworks at the Burj Khalifa to go on as planned at sharp midnight.

"Dubai's successful New Year's celebration is testimony to its steadfast commitment to its major projects and initiatives," said the Dubai Media Office in one of its tweets. 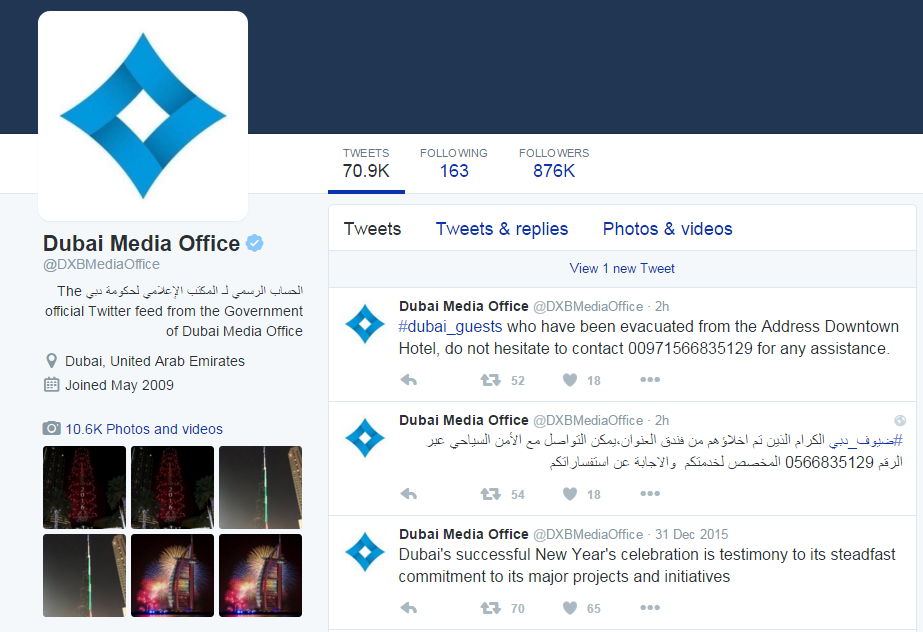 Meanwhile, Dubai authorities have set up a Special Helpline for those affected by the hotel fire. Tourism is one of the main pillars of the emirate's economy.

"#dubai_guests who have been evacuated from the Address Downtown Hotel, do not hesitate to contact 00971566835129 for any assistance," said the Dubai Media Office in another tweet.

Dubai Civil Defence said that cooling procedures are still underway after the blaze at The Address Downtown Dubai hotel was brought under control and prevented from spreading to other buildings. It said an investigation is being conducted to ascertain the causes of the accident.

Dubai Civil Defence said the fire broke out at around 9:00 pm on Thursday and the initial information indicates that it originated from the 20th floor of the hotel. All information about the accident will be published once the investigation is complete.

The Crisis Management Committee, chaired by Commandant General of Dubai Police Major General Khamis Matar Al Muzainah, led the efforts to manage the incident, control the damages and secure the safety of the public, which was given top priority.

During the early hours of Friday, Major General Al Mazeina said, 14 people sustained minor injuries, one person sustained a moderate injury and one person suffered a heart attack. Al Mazeina said there were no fatalities and all injured people were given medical assistance at the site and then transported to hospitals for further treatment. All injured were discharged except for two - a pregnant woman and an elderly man - who are safe and in good condition. The two have been kept at the hospital for close medical observation to ensure they recover completely.

Al Mazeina praised the exceptional collaboration between all the entities that are part of the Crisis Management Committee and the extraordinary efficiency of the Dubai Civil Defence in controlling the fire and helping avoid serious injuries or causalities.

Four fully equipped squads from Dubai Civil Defence units were dispatched to the fire scene, while ambulance teams were rushed to provide instant medical care and first aid on site.

Dubai Government responded rapidly to the incident and coordinated efforts to instantly evacuate the hotel’s guests to ensure their safety. Dubai’s Department of Tourism and Commerce Marketing provided alternative accommodation for all the guests. A dedicated hotline number (+971 442 38870) was created for the hotel’s guests and for any inquiries or support.

The Government of Dubai Media Office (GDMO), led by GDMO’s Director General Mona Ghanem Al Marri, coordinated with Dubai Police, Dubai Civil Defence and other concerned authorities to keep the public and media updated on a timely basis on all developments via social media.