2013 Dubai rents' forecast: Costly, cheap and where to find value for money

Residential rents in established locations Downtown Dubai, Dubai Marina and Palm Jumeirah will continue to rise in 2013 but any increase in secondary locations is unlikely, according to Jones Lang LaSalle (JLL).

“We have seen an increase in rents in established areas and we expect the same trend to continue. Rents are unlikely to increase in secondary locations,” Craig Plumb, Head of Research, MENA, JLL, told 'Emirates24|7'.

In its fourth quarter 2012 Dubai real estate market overview, the global consultancy said there was recovery in the overall residential market in 2012, with average prices and rents both picking up.

The villa rent index went up by six per cent y-o-y and is now two per cent higher than the peak level, while the apartment rental index rose seven per cent y-o-y. It however remains 26 per cent lower than January 2009 (when the index commenced).

The Reidin residential sale indices improved 19 per cent y-o-y, with the villa market outperforming the apartment sector in 2012.

In the fourth quarter, around 4,600 residential units, mostly apartments, have been delivered to the market, taking the total residential stock in areas monitored by the global consultancy to around 354,500 units.

JLL expects release of 45,000 new residential units over the next two years with most of the future residential stock being located outside central Dubai. 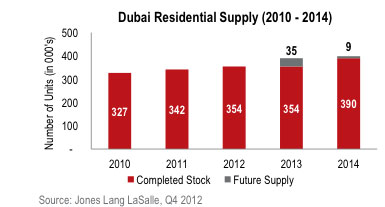 The consultancy believes the new regulations by the UAE Central Bank to cap loan-to-values on mortgages are likely to reduce demand and limit the rise in residential prices in Dubai.

The Central Bank circular on December 31 said mortgage loans for expats should not exceed 50 per cent of the property value for a first purchase of a property and 40 per cent for second and subsequent homes, while for UAE citizens it was set at 70 per cent and 60 per cent, respectively.