“An accident took place at the intersection of Beirut and Baghdad streets and there is serious traffic congestion at the same intersection, so please take care,” Dubai Police tweeted.

Eyewitnesses said the accident happened on the last junction of Beirut Street just before the Airport Tunnel. It appeared as if the vehicle had jumped the red signal and banged into the other vehicle in the middle of the junction, resulting in serious damage to both  vehicles. Police has parked its vehicle around the damaged cars so that t traffic can move faster and drivers don’t slow down to watch the damaged vehicles, eyewitnesses said.

However, there were no immediate reports of casualties by Dubai Police. The accident happened at around 1.15pm.

The Emirati driver of a Range Rover burnt to death in his car, after the vehicle hit a pole and caught fire.

Major General Mohammed Saif Al Zafeen, Director, Dubai Traffic Department, said that the incident occurred at 8am this morning on the Dubai Bypass Road, after the car veered off the road and hit the pole.

“As a result of excess speed the car jumped the concrete barrier and caught fire after hitting the pole. The driver was stuck inside and burnt to death. 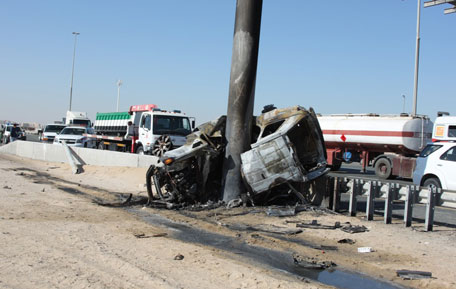