Latest update: Abu Dhabi Police tweet: Reduced visibility due to dust in different areas in Abu Dhabi and highways. Motorists are urged to drive with caution."

Morning commuter and Emirates 24|7 reader: “I live in Bur Dubai and commute to Jebel Ali every day. On a normal day, my travel time is about 45 minutes in the morning peak hour.

“However, this morning it took me more than two hours to just reach JLT. I parked my car at a friend's parking space in a JLT cluster and walked down to the Marina Metro station and zipped down to Jebel Ali.”

Dubai Police tweet: "An accident has been reported on SZR before the seventh bridge toward Abu Dhabi, please be extra cautious And use alternative routes."

While the fog that blanketed the country for most of Saturday and Sunday, eased on Monday morning, but Dubai residents had to contend to with an early morning accident and delaying traffic.

Dubai Police tweet: An accident has been reported on Al Quds road. There is traffic, please be careful.

Meanwhile, the UAE can expect some light rains today [Monday] as the cloud cover increases.

According to a NCMS forecast, islands and coastal areas as well as eastern mountainous areas may receive light rains by this afternoon and evening. 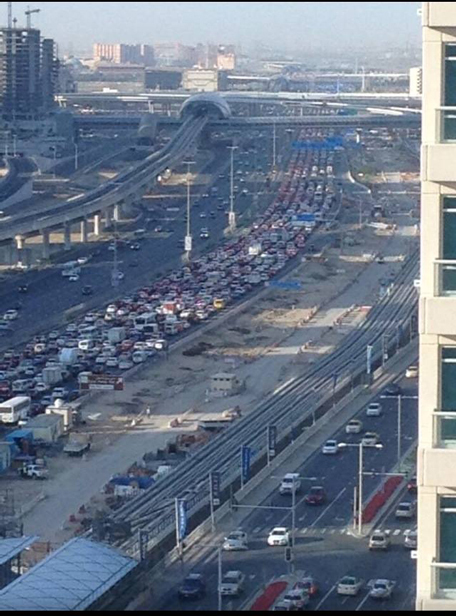 This is likely to decrease temperatures with the night being colder.

Minimum temperatures in internal areas is likely to dip to 8 degree centigrade with a maximum of 30 degrees C.

Meanwhile, relative humidity will increase touching 95 per cent in coastal and internal areas.

An Etihad Airways spokesperson also confirmed flight delays due to the fog, saying: "As a result of the dense fog that occurred today there has been minor disruption to our operations.

"This resulted in the diversion of two flights from Peshawar and Trivandrum to Al Bateen and Al Ain Airports; however the flights have now returned to Abu Dhabi. "The schedule is returning to normal and all customers are advised to check-in as normal."

Earlier on Sunday, an Emirates spokesperson had said: “Severe fog in Dubai on February 22 and 23, 2014, has caused the delay of numerous Emirates flights arriving and departing at Dubai International Airport.

“We are assisting affected passengers with the rebooking of connecting flights.

“Emirates apologises for the inconvenience caused. The safety of our passengers and crew is of utmost importance and will not be compromised.”

The airline is urging passengers to check their flight status on the Emirates website for latest updates.

The National Center of Meteorology and Seismology (NCMS) was still reporting heavy fog in certain pockets in the UAE.

The NCMS forecast for the day reported pleasant to moderate weather during the day, with a slight increase in temperature over some areas. The sea was also forecast to be slight to moderate in general.

Heavy fog shrouded Dubai in a mist of near zero visibility on Saturday morning and had not lifted till as late as 8am. 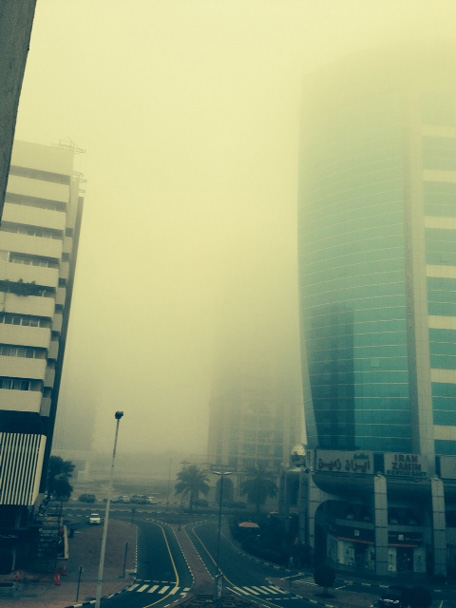 Fog wafted in and remained well into the morning in residential areas like Maktoum Street, Deira.  (Pic: Roopesh Raj)

The National Centre for Meteorology and Seismology (NCMS) had forecast fog in the night and morning, but few Dubai residents expected it to be as intense as what they were greeted with this morning.

The fog is forecast to give way to pleasant weather during the daytime, with a slight increase in temperature over some areas, according to the NCMS. 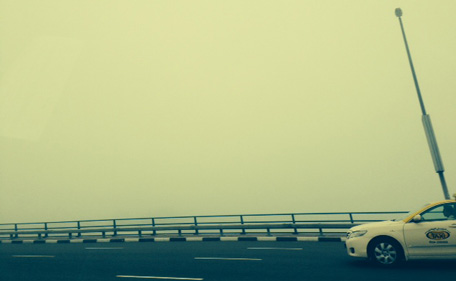 The fog blanketed the view of the creek from Maktoum Bridge. (Pic: Roopesh Raj)

Dubai Police while not reporting any accidents till 8.40am, did issue a safe driving warning, tweeting: "We call on all drivers to be cautious and to drive safely and leave enough distance between vehicles due to heavy fog and unclear visibility."

In Abu Dhabi, fog reduced visibility to less than 10 metres in the early hours of the morning.

Fog remained blanketing the capital for several hours after dawn, forcing motorists to flash their lights and drive slowly on most roads.
traffic on roads remained light during the morning hours because of the fog and the fact that Saturday is holiday for most establishments in the country.

Police said they have cautioned motorists against driving fast in such hazardous conditions but reported no major accidents in the city of more than one million people.

Click to see... Picture this: A foggy morning in UAE