Emirati astronaut Hazza Al Mansoori will be the first to conduct an introductory tour in Arabic at the International Space Station, ISS. He will enter space onboard the Soyuz MS-15 spacecraft from the Baikonur, Kazakhstan, on 25th September 17:56 (UAE time) as part of his eight-day space tour. 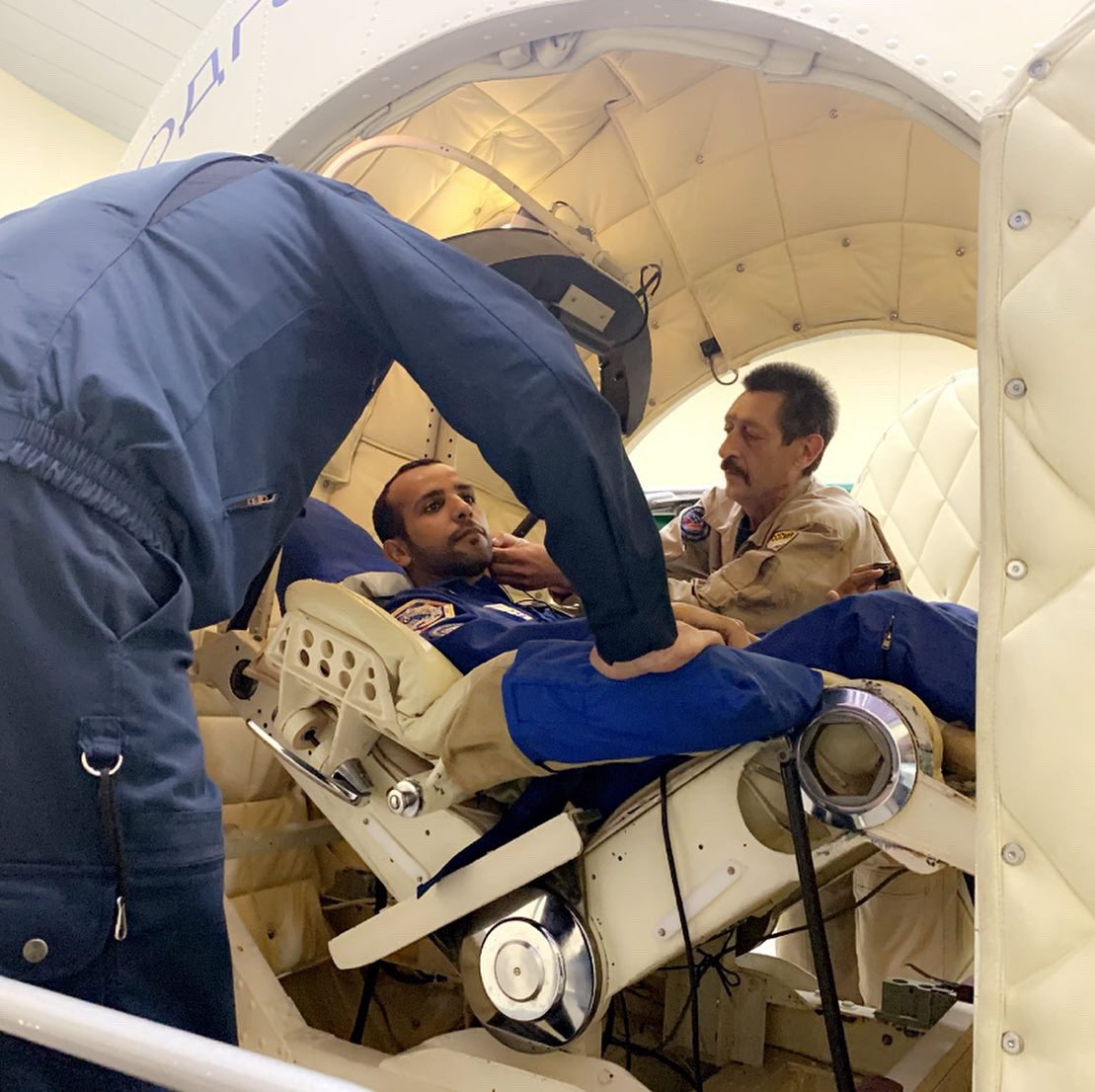 Following more than 1,400 hours of training and 90 courses within a year, Al Mansoori will carry out 16 scientific experiments in cooperation with international space agencies, making the UAE the 19th country to get a foothold on the ISS and contribute to scientific research.

This was announced at a press conference held by Mohammed Bin Rashid Space Centre, MBRSC, in Dubai on Monday, attended by Yousuf Hamad Al Shaibani, Director-General of MBRSC and Salem Al Marri, Assistant Director General for Science and Technology Sector and Head of UAE Astronaut Programme, along with programme’s executives.

"All pre-spaceflight medical experiments were completed just a month before the first Emirati astronaut Hazza Al Mansoori would be rocketed to the ISS on 25th September," Al Shaibani told the press conference.

Speaking to the Emirates News Agency, WAM, Al Marri said, "Our mission to space aims to inspire our next generation. The ultimate value of the mission is to contribute to the enrichment of scientific progress in the UAE and make further achievements in the space, science, and research industry, to serve the ambitious aspirations to be one of the leading countries in the space industry and its science and technology."

He dismissed any concerns about the failure of the Soyuz spacecraft carrying Russia's first humanoid robot on Saturday to dock automatically with the international space station.

"It was an unpiloted trip and scientists at Russia's Roskosmos are trying to correct the issue. There will be another attempt soon. The incident has no impact on Al Mansoori who is now at his best and completed all pre-spaceflight medical experiments one month before the trip."

"We are proud of our national cadres who have led the various phases of this pioneering mission, which will lead the space sector in the future and contribute to the enrichment of scientific progress in the UAE and make further achievements in the space, science, and research industry, to serve the ambitious aspirations to be one of the leading countries in the space industry and its science and technology," added Al Marri.

Al Mansoori's scientific mission is divided across three areas. The first is scientific experiments identified in cooperation with global partners, including NASA, the European Space Agency, ESA, Japan Aerospace Exploration Agency, JAXA and Roscosmos. The second is the Science in Space initiative - simple scientific experiments selected based on the UAE’s school curriculum. The third pillar is educational initiatives, in coordination with the ESA and JAXA.

MBRSC officials shed light on the preparations for this mission, which began on 3rd September 2018, with extensive training for Hazza Al Mansoori and Sultan Al Neyadi. The two astronauts began their training by learning the Russian language at the Yuri Gagarin Cosmonaut Training Centre at Star City in Moscow, as it was a key requirement to proceed to the next training on the Soyuz vehicle and for takeoff and landing.

Al Mansoori and Al Neyadi spent an entire year filled with challenges. During this year, they took many tests and training sessions together, in preparation for the mission - an important milestone in the UAE’s modern history.

The main crew of the mission are Al Mansoori, Oleg Skripochka, and Jessica Meir. While the back-up crew is composed of Al Neyadi, Sergei Nikolaevich and Thomas Henry.

Al Mansoori will conduct 16 scientific experiments in cooperation with international space agencies, including the Russian Roscosmos and the European Space Agency, ESA. Six of these experiments will be done aboard the ISS to study Brain-DTI (Diffusion Tensor Imaging), osteology, motor control, time perception in microgravity, Fluidics (fluid dynamics in space) and DNA methylation (DNAm) age.

The scientific mission includes experiments involving schools in the UAE as part of MBRSC’s Science in Space initiative. The first phase of the initiative witnessed the participation of nearly 16 schools from the UAE, in the presence of Al Mansoori.

These experiments will be conducted in microgravity environment aboard the ISS and the results will then be compared with those done on Earth. This will contribute to supporting the UAE curriculum with new scientific materials to be gained from the UAE's first human space flight.

MBRSC is sending a total of 10kg shipment related to the UAE’s heritage, culture and history with Hazza Al Mansoori.

Al Mansoori will take the UAE flag made of 100 percent silk, a photo of the late Sheikh Zayed bin Sultan Al Nahyan with a delegation of Apollo astronauts, taken 1976, a copy of the Holy Quran, a book entitled ‘My Story’ by His Highness Sheikh Mohammed bin Rashid Al Maktoum, Vice President, Prime Minister and Ruler of Dubai, in which the first chapter talks about the story of the day he announced the launch of the UAE Astronaut Programme, and MBRSC’s book 'The Race to Space.' MBRSC has signed an agreement with the Emirates Amateur Radio Society to build a radio station inside the centre to communicate with the first Emirati astronaut while aboard the ISS. It was tested by conducting a call with a Russian astronaut who is currently aboard the ISS.