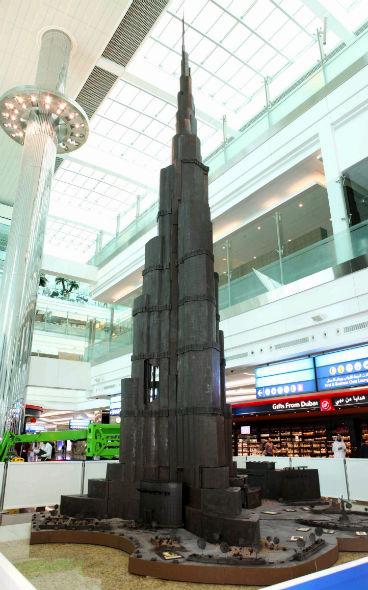 The chocolate tower is a creation of the master chocolatier Andrew Farrugia, and has been made using 4,200 kilogrammes of Belgian chocolate. It took Farrugia and his team 1,050 hours of painstaking work to complete the tower, according to a statement issued by the airport.

The chocolate Burj Khalifa is part of the 43rd UAE National Day celebrations at Dubai Airports, and is located at Concourse A in Terminal 3 of Dubai International and will be on display for two weeks.

“Dubai is known all over the world for superlatives – the city is home to some of the world’s tallest buildings apart from Burj Khalifa; one of the world’s top two busiest international airports, one of the world’s largest seaports, largest shopping malls and a number of other world firsts. We thought it was a great idea to celebrate the National Day with a record breaking feat that travellers passing through Dubai International would be able to appreciate,” said Anita Mehra, Vice President of Communications & Business Development.

Farrugia is a Maltese artist who specialises in food art, and has been working in the field of pastry and baking for 32 years.

He has participated in several international culinary competitions in London, Malta and Egypt, winning top honours for his chocolate sculptures.

Last year, he was responsible for a Guinness World Record for the longest chocolate sculpture in Brussels, when he built an incredibly detailed 34 metre long steam train made entirely from chocolate.