The Bridge consists of two lanes in each direction in addition to another lane serving the traffic coming from Al Wasl Street to Al Aathar Street.

The Bridge passes over the Canal at a height of eight meters, thus allowing free navigational traffic around the clock.

The Bridge will improve traffic flow on Al Wasl Street, and for vehicles coming from Jumeirah 1 towards Jumeirah 2, Jumeirah 3, Park Street and vice versa. 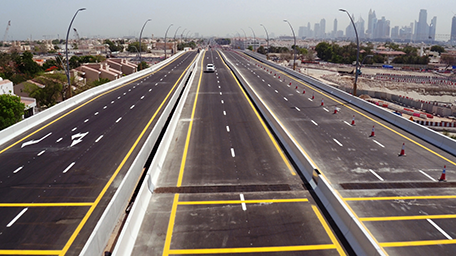 “After opening Al Wasl Street Bridge, the Canal works underneath the bridges would be finalised, sub-roads and sidewalks would be opened, and all traffic diversions would be removed,”  said Mattar Al Tayer, Director-General and Chairman of the Board of Executive Directors of Roads and Transport Authority.

As part of Phase II Contract of the Dubai Water Canal, last March, the RTA opened a bridge to ease traffic coming from Al Aathar Street towards the Park Street over Al Wasl Street.

The bridge eased traffic for vehicles coming from Jumeirah Street and Al Aathar Street towards the Park Street and Sheikh Zayed Street. The completion rate of Jumeirah Street Bridge has reached 70% approximately, and the Bridge is poised for completion by mid-July 2016, following the completion of all sub-road works, jogging track, sidewalks and subsequent services.

The completion rate of the Southern Bridge on Sheikh Zayed Street in the direction from Dubai to Abu Dhabi has reached more than 81%, and the bridge is expected to open this July.

On the other hand, Phase 1 of the Contract includes the construction of an 8-lane wide bridge on Sheikh Zayed Street, in each direction, passing over the Canal, thus allowing free navigational movement around the clock.

It also includes rerouting affected roads in order to ensure integration of traffic between the two banks of the new Canal, noting that new construction works will affect about 800 meters of the Sheikh Zayed Street.

Phase I also includes shifting the existing utility lines, which were affected by the Canal, in addition to installing smart lighting and fountains on the Bridge. Phase II Contract includes digging the water canal, building the Canal slopes, and constructing three pedestrian bridges in key locations linking the two banks of the Canal to facilitate the movement of residents and visitors, and encourage the use of mass transit in general and marine transit in particular.

Phase III  includes the construction of 10 marine transit stations, and filling up works to build an artificial semi-island along Jumeirah Park, which will double the length of  Jumeirah Park Beach, increase the Park area, and allow for more recreational activities.