Vice President and Prime Minister and Ruler of Dubai, His Highness Sheikh Mohammed bin Rashid Al Maktoum laid on Monday the foundation stone for the ‘The Tower at Dubai Creek Harbour’ project, the new iconic structure that will be the world’s tallest tower when completed by 2020.

Sheikh Mohammed bin Rashid said that Dubai’s exceptional urban growth, which is supported by quality construction projects, is driven by the country’s ambitious development plan, which seeks to achieve the welfare and happiness of the people of the UAE. 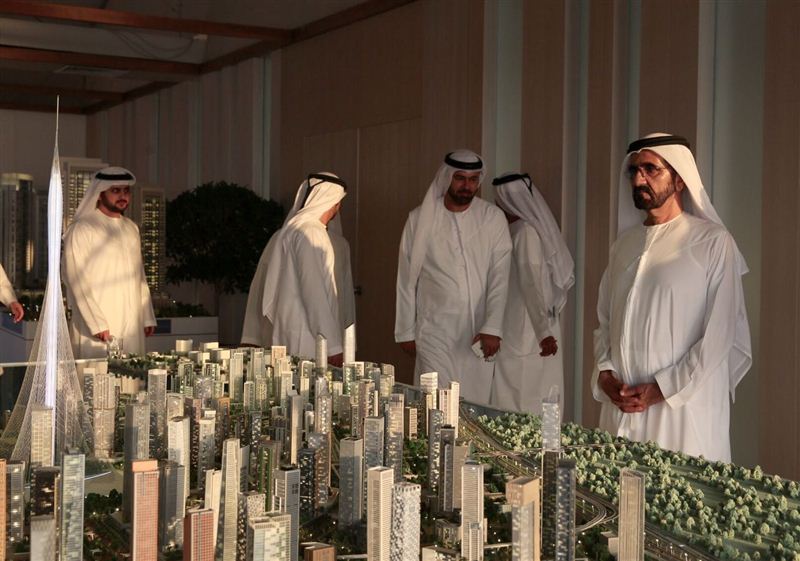 "Years ago, we launched Burj Khalifa, the tallest skyscraper in the world. Today, we are celebrating the foundation of a new structure that represents another phase in our journey to be at the forefront of growth in various sectors," he said.

Sheikh Mohammed further said, "Thanks to Allah, we have created a strong foundation for a brighter future, and we are proud of what we achieved. We are used to challenging ourselves, which is key to achieving new benchmarks. At the same time, we will spare no effort to support the existing projects and explore new opportunities in order to further cement our global leadership."

Providing stunning 360 degree views of the city and beyond, the Tower strengthens the UAE’s reputation for innovation and excellence in architecture, engineering and construction and will eclipse Burj Khalifa as the tallest building in the world.

Redefining the nation’s already spectacular skyline and setting a new global referral point, The Tower anchors the 6 sq. km Dubai Creek Harbour mega-development, located just 10 minutes from the Dubai International Airport, and will serve as a magnet for tourists and visitors from around the world. The Tower is designed by Spanish/Swiss architect Santiago Calatrava Valls.

One of the world’s largest master-planned developments, Dubai Creek Harbour integrates the latest design, engineering and sustainability features. A next-generation smart hub, it will also incorporate an advanced digital lifestyle defined by the latest developments in artificial intelligence.

The waterfront development, a joint venture between Emaar Properties and Dubai Holding, is located just off the Dubai Creek, the birthplace of Dubai’s history and culture, and in close proximity to the Ras Al Khor National Wildlife Sanctuary, protected under the UNESCO Ramsar Convention.

The Tower at Dubai Creek Harbour supports the goals of Dubai Plan 2021 to establish the city as a global business and leisure hub, and will add real economic value by driving the growth of the core sectors of tourism, hospitality, aviation and retail among others.

The crowning glory of The Tower at Dubai Creek Harbour will be The Pinnacle Room, opening to spectacular views of the city, as well as several VIP Observation Garden Decks. The Tower will have dynamic illumination and movement lighting, which will make it a stunning visual landmark during the day and night. In addition, several ‘green corridors’ will offer pedestrian access and effortless connectivity with Dubai Creek Harbour.