Dubai Airports has announced a range of activities involving food, music, dedicated services and special amenities across the airport in celebration of the Chinese New Year. It’s all part of a comprehensive "China Ready" strategy designed to boost traffic between Dubai and the 13 destinations in China served by DXB.

Apart from celebrating Chinese culture through art, food, and musical performances, the airport has taken a number of integrated steps to engage Chinese travellers, from the installation of potable hot water dispensers to the use of Mandarin language for communication, digital menus for select restaurants, as well as digital channels such as the airport’s Wow-Fi product, and even a special Mandarin edition of the airport’s popular magazine Time Out DXB.

A growing number of retail and food concessionaires at DXB have now adapted and are offering Alipay, China’s most popular mobile payment platform, as a payment option. Dubai Airports is deploying Mandarin-speaking 'May I Help You Staff' at key customer touch points across the airport while also providing four dedicated immigration counters at arrivals hosted by Emiratis fluent in Mandarin, for visitors from China. 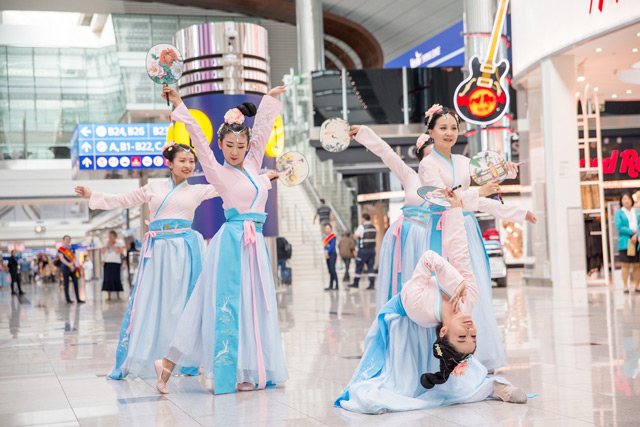 Dubai Airports has also partnered with Department of Tourism and Commerce Marketing, DTCM, of Dubai to include special passport inserts at immigration for arriving Chinese travellers, which will include a QR code that links with recommendations for events taking place across the city during Chinese New Year. Late last year, Dubai Airports also signed an agreement with China’s leading tour operator C-Trip.

The celebrations are part of Dubai Airports’ plan which focuses on anticipating requirements unique to the Chinese culture and making product and service enhancements accordingly to enhance services to growing number of Chinese travellers at DXB. In 2018, passenger traffic between DXB and China grew by 6 per cent to 3.5 million with 6 airlines operating 205 weekly flights to 13 destinations.