Emirates will operate a special one-off A380 service on 23 September to the capital city of Riyadh in the Kingdom of Saudi Arabia, in celebratory participation of the country’s 88th National Day. Watch as the preparations begin to mark the Kingdom’s National Day. 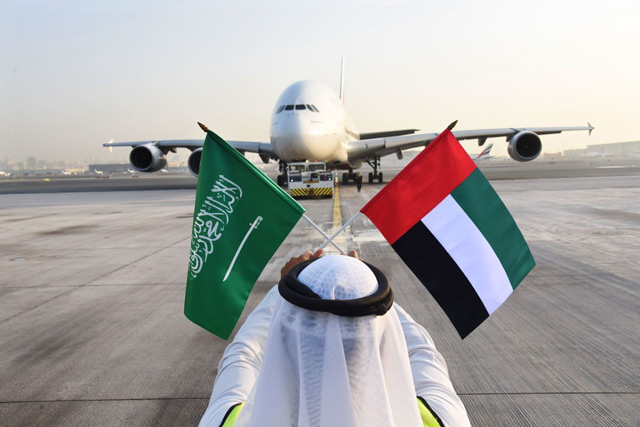 Sheikh Majid Al Mualla, Divisional Senior Vice President, Commercial Operations Centre, said: "The UAE enjoys a strong relationship with the Kingdom of Saudi Arabia through fraternal ties and constructive cooperation, as well as a shared vision for the future. Bringing the Emirates A380 is a fitting way to support the National Day celebrations, and for customers in Riyadh to try the superior A380 product for themselves. King Khalid International Airport is also well equipped to handle the A380 and we are working closely with the civil aviation authorities to ensure the one-off operation is successful, and we thank them for their support."

The Emirates A380 service will touchdown at King Khalid International Airport on 23rd September as EK 813 and EK 814, departing Dubai at 1500hrs and arriving in Riyadh at 1550hrs. The flight will then depart Riyadh at 1850hrs, arriving in Dubai at 2140hrs.

The Emirates A380 flying to Riyadh will be set in a three-class configuration, featuring 14 First Class suites, 76 flatbed seats in Business Class on the upper deck and 429 seats in Economy Class on the lower deck. Premium class passengers travelling on the A380 will experience Emirates’ Onboard Lounge where they can socialise, network and enjoy complimentary beverages, canapés and other special delicacies.