A crowd of thousands, including people of determination, Heads of State, dignitaries, VIPs, celebrities, members of the community, families and fans packed into the stadium to watch an incredible live show that weaved together the heritage of the Emirates, the spirit of the Special Olympics, the goals of the Abu Dhabi World Games and the vision of the UAE.

Shriver began his speech by telling the audience that the Special Olympics movement may be 50 years old but "we’re only just getting started". He asked the audience to join him, his family, Mary Davis and the Special Olympics international board of directors in thanking the founder of the Games – his mother, Eunice Kennedy Shriver. Shriver described his mother as a steel-willed woman who was razor-sharp smart and a world-class competitor who had a heart that would not tolerate discrimination.

The Chairman of the Special Olympics said Kennedy Shriver would have been overjoyed to see the turnout today in Abu Dhabi. But, he said, her greatest joy would have been to know that each one present at the stadium was a founder too.

Shriver said the Games’ 50th anniversary goal was to do nothing less than to unleash a revolution of inclusion that introduces a new type of freedom into the history of humankind. He said the Special Olympics movement was dedicated to nothing less than changing the hearts and minds of every human being on earth, to teaching every human being how to see with the eyes of love and with those eyes, to see that are not made to be divided.

"We are made to be whole. And we are not made to be despised or rejected. We are made to matter!" Shriver said. He added that we were not made to sit on the sidelines of life. Instead, we are made to train, to be on the team, to compete, and to win! "We come to set humanity free from the chains of judgement and exclusion and show the way to the freedom that unifies the world," he said. 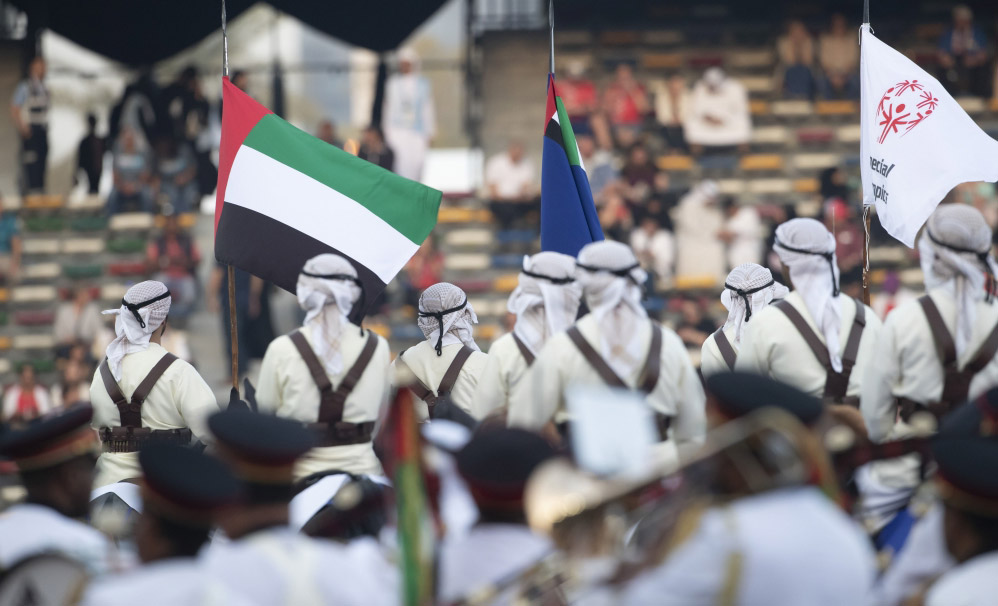 Centuries ago, the religion of Islam, dedicated to the one, all-powerful, all merciful, all compassionate God, was born here, Shriver said. Then, the sacred words were written: "We believe in Allah and what has been revealed to us and what has been revealed to Abraham and Ishmael and Isaac and Jacob and the Descendants and what was given to Moses and Jesus and what was given to the prophets from their Lord. We make no distinction !"

Shriver urged the audience to listen to these words - "We make no distinction!". He described it as a message from times immemorial but one that was also a message for times yet to come. Shriver said the Special Olympics athletes had come here to tell the world that they were today’s prophets of "no distinction." He said there was no ‘us’ and ‘them’. No "othering" of those who are different. Just ‘us’, each one free, each one belonging to the great web of life.

Addressing the athletes directly, Shriver said that all those who love you were watching. "So now, think of your ancestors, your grandparents, your friends not here," he said. Shriver said his thoughts were going to the millions of Special Olympics athletes and their families who were sending the competitors their love from all over the world. "I think of the founders of the UAE who imagined a nation of tolerance. I think of so many lonely and forgotten brothers and sisters who dream of a night like tonight."

Shriver said he believed they were all here in this moment. He said the energies of love, crossing time and space, arising from pain and separation, fuelled by souls starving for beauty and goodness and life, were a force more powerful than the greatest military, more valuable than any jewel. Shriver described the energy of love as the pearl of great price and said the athletes had this. Addressing the athletes, he said that when they arrive at their marks, they should know one thing: that in freedom they had already awakened the world, in bravery they had already changed the course of history, and in love, they had already won the gold medal of life. 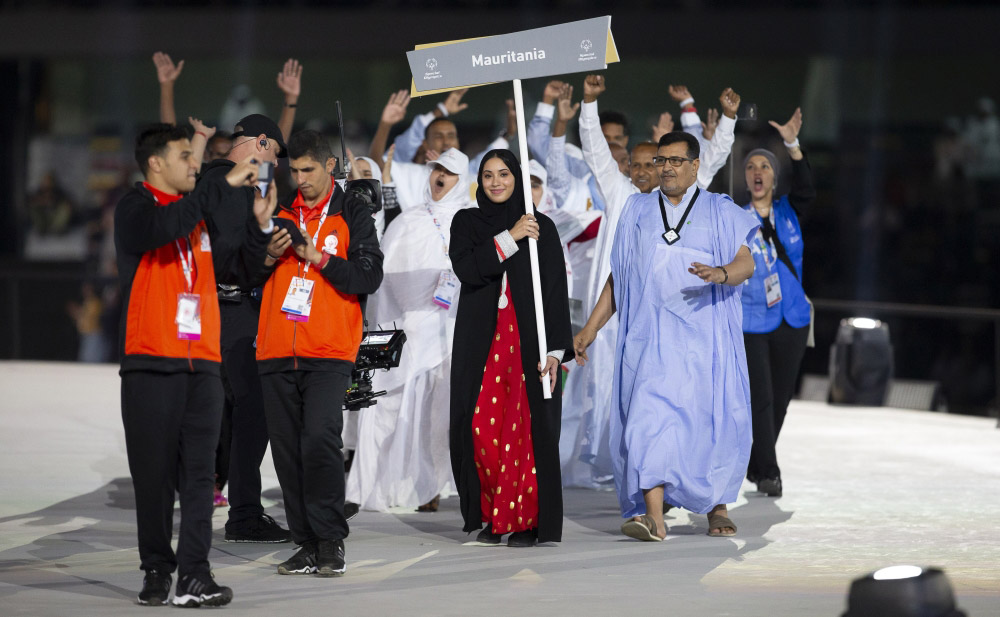 Some of the biggest names in music delivered a thrilling rendition of the official World Games anthem ‘Right Where I’m Supposed To Be’ for the very first time.

The song was performed by global superstar Avril Lavigne, whose song ‘Fly’ was the official anthem for the 2015 World Games, and Luis Fonsi, singer of global smash-hit single ‘Despacito’ Emirati singer and Good Will Ambassador at Large, Hussain Al Jassmi, Syrian superstar Assala Nasri, and star of Egypt and the Arab world, Tamer Hosny.

The new anthem is a sensational celebration of the spirit of Special Olympics and Abu Dhabi’s goal of creating a more inclusive world that truly values the contributions of every individual, regardless of ability.

People of determination played a leading role in the Opening Ceremony. They are the ‘Makers’ who worked hand-in-hand with an international team of specialists and performers to make their vision a reality to mark the beginning of the biggest sports and humanitarian event on the planet this year. 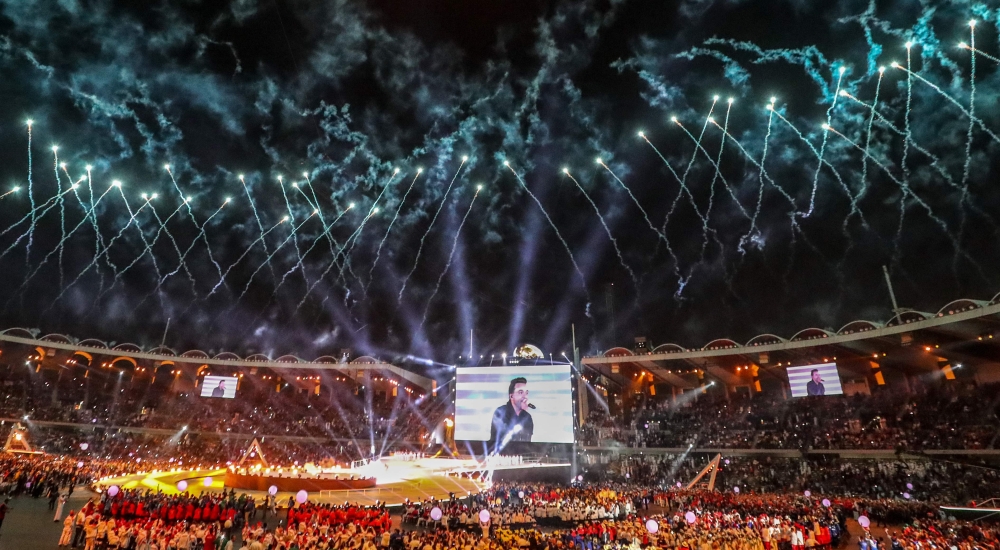 The ‘Makers’ shaped the performances to encapsulate the spirit of the Olympic dream that is shared by each of the 7,500 athletes. The ‘Makers’ showed that people of determination have a powerful voice and are the greatest leaders, teachers and champions for inclusion.

One such performance was ‘Woven World’. Singing first in Arabic and then English, hundreds of youngsters performed in a celebration of the strength and beautiful diversity of our world and the boundless humanity we all share.

To the delight of the crowd and watching dignitaries, the singers joined together in one perfect voice to perform as a Global Unified Choir. 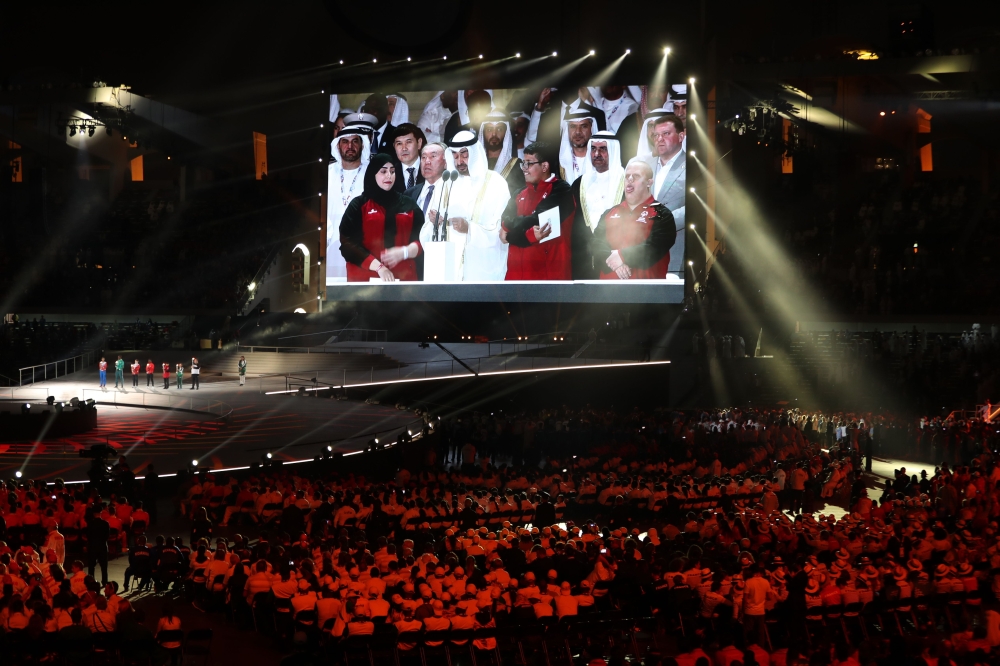 Projected on giant screens around the venue, the children weaved a wonderful choreography of sound and light as a stunning LED disc bearing the logo and symbol of the World Games Abu Dhabi was slowly raised into view.

With the voices of hundreds of children still echoing around the stadium, thousands of Special Olympics athletes entered the arena.

In a moment of incredible pride, joy and excitement, teams of athletes from the competing countries paraded into Zayed Sports City to a stirring and empowering chorus of cheers and claps from the crowd.

More than 1,000 VIPs representing Special Olympics, the World Games and the UAE also joined the athletes in an amazing display of inclusivity and unity while the legendary British DJ Paul Oakenfold electrified the stadium with his world-famous selection of uplifting house music and entertained athletes as they walked and danced into the arena.

The name of each country was projected across the stadium’s giant screens and around the stage, with each receiving enthusiastic applause from the crowd.

The athletes and spectators stood to attention to respectfully observe the raising of the UAE’s flag. A proud moment for every Emirati, expatriate resident, and the scores of people who have worked tirelessly to make the World Games a reality, the UAE’s national anthem was then played to rapturous applause.

Next, in a visionary piece of audience interaction, thousands of arms were raised to the sky revealing a beautiful collage of LED World Games wristbands.

Led by a group of athletes and performers on the center stage, the glowing wristbands acted as a powerful display of unity, inclusivity and commitment to the goals of Special Olympics World Games Abu Dhabi 2019.

The stage was then perfectly set for an address by Dr Timothy Shriver, Chairman of Special Olympics, who delivered a rousing, heartfelt and inspirational message to the UAE and the world.

Dr Shriver’s speech was followed by a message of unity from the UAE Special Olympics community, including athletes and members of the Local Organizing Committee (LOC) of the Special Olympics World Games Abu Dhabi 2019.

What followed next was a moment of reflection and remembrance as spectators turned to view a short film dedicated to the memory of the Special Olympics founder, Eunice Kennedy Shriver.

The World Games Abu Dhabi is a fitting tribute to the remarkable achievements of Mrs Shriver, who passed away 10 years ago. This year also marks five decades since the Games were officially established.

After paying homage to the roots and history of the Special Olympics, it was time to celebrate the latest addition to the legacy of the global sports and humanitarian movement with the arrival of the Flame of Hope.

Carried by athletes from all seven continents and officers from the Law Enforcement Torch Run for Special Olympics, the torch circled the stadium as a festival of Emirati cultural performances, traditions and dances were played out on center stage. 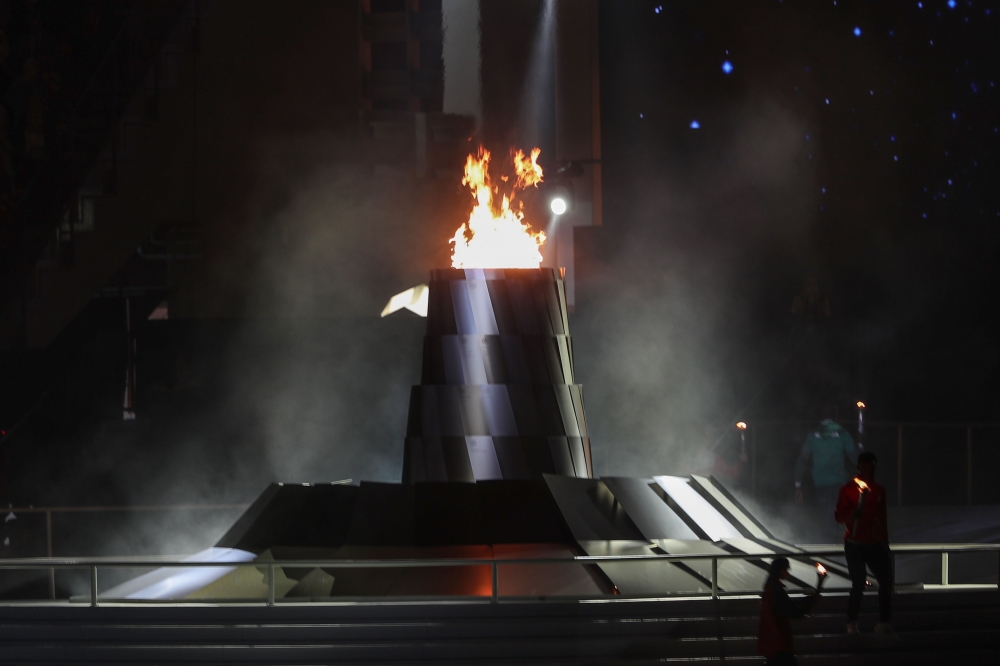 To a heart-pounding drum beat, the crowd watched displays of UAE traditions, such as the sharing of gahwa coffee, as the torch was passed from runner to runner, each igniting their own symbolic flame.

The runners then gathered around a cauldron to light the Special Olympics flame that will burn for the duration of the World Games.

As the Special Olympics Flame burned brightly and the official anthem filled the air, the final curtain was brought down on a spectacular Opening Ceremony that signaled the beginning of seven days of incredible sport, human endeavor and unity.