He spoke with representatives of the event’s exhibitors and learnt about the development projects launched by international companies, as well as their role in promoting security, achieving stability and protecting cities.

He also spoke with them about the role of IDEX, which is a key international platform for exchanging research, expertise and future ideas.

His Highness Sheikh Mohamed visited the pavilions of Bin Hilal Enterprises, BCB International, Aquila Aerospace, the Trust International Group, and the Emirates Advanced Research and Technology Holding, EARTH, as well as the Greek pavilion and those of the King Abdullah II Design and Development Bureau, the Abu Dhabi Vocational Education and Training Institute, UAE University, and the Egyptian, Ukrainian and Australian pavilions.

At the end of his tour, H.H. Sheikh Mohamed thanked the Higher Organising Committee and partners of the 14th edition of IDEX, which celebrated its silver anniversary, as well as participating international companies, institutions and the exhibition’s visitors.

He expressed his pride at the world-class organisation of the event, which is a key platform for showcasing the latest defence and military developments and how to benefit from them, to develop the country’s industrial, military and civilian projects and programmes that are key to its comprehensive development while affirming that enhancing the capabilities of the national defence industry will remain a strategic goal.

H.H. Sheikh Mohamed said that IDEX 2019 began a new stage of partnerships and cooperation between companies and entities that manufacture and market defence and military products and systems while pointing out that the exhibition attracts major international companies and institutions, as well as many visitors, which reflects its success as a destination for relevant companies and its stature as the best environment for the sector’s prosperity.

He added that the exhibition has provided, over 25 years, an international platform for viewing the latest defence and military systems and the industry’s latest innovations, making it a key event for promoting innovation, initiatives, ideas and pioneering while expressing his pride at the exhibition’s organisation and its level of participation, which have contributed to its success.

During his tour, His Highness Sheikh Mohamed reviewed the key development programmes and plans of international companies and their defence equipment and technologies.

Sheikh Mohamed began his tour at the pavilion of the Khalifa University of Science and Technology, which is showcasing its latest research in robotics and drones. He then visited the pavilion of the Al Hamra Group, which specialises in defence, security and information gathering, before touring the stand of Al Yah Sat, which is showcasing its latest government and military space-based communication technologies.

He then visited the Etimad Holding Group, which is offering various products that include training drones.

His Highness Sheikh Mohamed also toured the Singapore Pavilion, where he was briefed about the devices and equipment being showcased by ST Engineering. 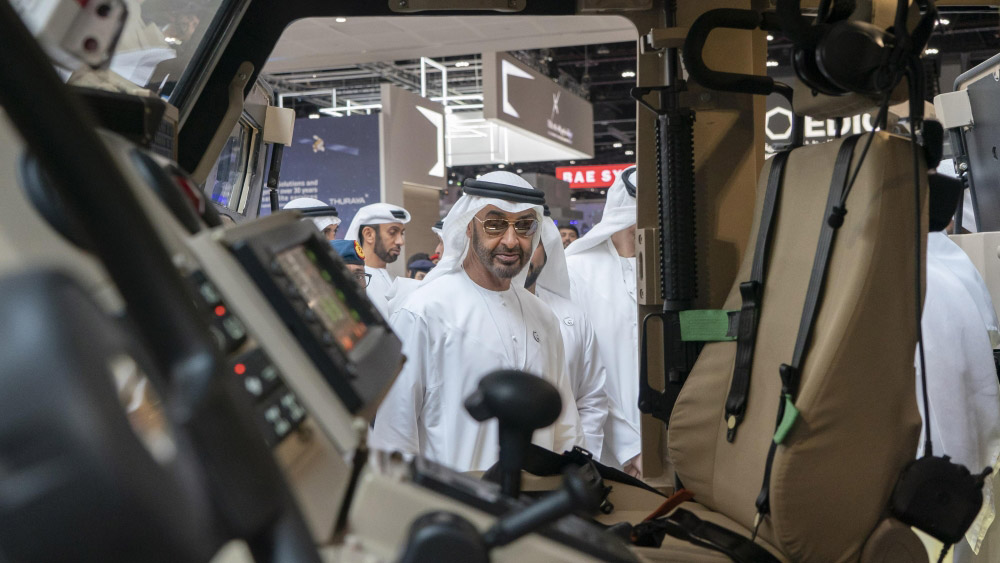 He inspected the pavilion of the Higher Colleges of Technology and learnt about the leading projects of its students. He then toured the pavilion of Georgia's State Military Scientific-Technical Center, Delta.

Sheikh Mohamed also visited the pavilion of the Ahmed Al Mazrouei Group and learnt about its expertise in Artificial Intelligence, before touring the stand of the Darwish bin Ahmed and Sons Company.

He also visited the pavilion of the NEXTER Group and inspected the stand of the South Korean Hanwha Corporation, which specialises in mine clearing equipment.

His Highness reviewed the products of the Abu Dhabi Ship Building Company, as well as its naval projects and programmes. He also inspected the pavilions of the French Naval Group, which specialises in naval defence and marine renewable energy, as well as Al Seer Marine, which manufactures boats and unmanned maritime vessels, as well as the Italian company, Leonardo, and Al Fattan from the UAE.

His Highness was accompanied during his tour by Mohammed Mubarak Al Mazrouei, Under-Secretary of the Crown Prince’s Court of Abu Dhabi, and Staff Lt. General Eng. Issa Saif bin Ablan Al Mazrouei, Deputy Chief of Staff of the Armed Forces.