The DFM, which has joined 70 global exchanges for the second consecutive year, is marking this occasion with a week of bell-ringing activities, in partnership with the United Nations Sustainable Stock Exchanges (SSE) Initiative, the World Federation of Exchanges, IFC, UN Global Compact, UN Women and Women in ETFs.

HE Essa Kazim, Chairman of DFM, attended the ceremony along with DFM’s senior management as well as representatives of numerous capital markets institutions, showing clear evidence of their strong commitment to promoting gender balance.

HE Essa Kazim, Chairman of DFM said: “Over the past years, the DFM has accelerated its efforts to empower women and strengthen gender balance in collaboration with various institutions in the UAE and beyond. The DFM is amongst leading exchanges that have joined the United Nations Sustainable Stock Exchanges (SSE) Initiative since 2016. We have also contributed to the Sustainable Development Report 2018. Today, we are pleased to host the Gender Equality bell ringing ceremony for International Women’s Day alongside 70 exchanges globally. We look forward to seeing these efforts gaining further momentum supported by the strategic partnership between DFM and DWE in order to realise the leadership’s vision and national goals pertaining to gender balance and empowering women. In fact, the constructive cooperation between the two sides over the past two years since we signed the MoU has played a vital role in enhancing women’s presence in the capital markets sector in general and women on boards of listed companies in particular.  We deeply believe that the joint efforts of DFM, DWE and other partners provide us with a solid foundation for greater success in the future, especially in terms of increasing women’s representation in the board of directors of listed companies to 20%. This goal is highly supported by the leadership as one of the main pillars of empowering women in the country, enabling distinguished female cadres to occupy leading positions whether at a ministerial level or at leading institutions.”

HE Mona Ghanem Al Marri, Vice President of the UAE Gender Balance Council, highlighted that the Dubai Financial Market’s initiative supports the Council’s and the Dubai Women Establishment’s strategic goals to promote the vital role of Emirati women in shaping the economic and social landscape of Dubai and the UAE.

DWE aims to increase female participation across various sectors by building partnerships with private and public entities that support the role of women - a manifestation of the vision and guidance of His Highness Sheikh Mohammed bin Rashid Al Maktoum, Vice President and Prime Minister of the UAE and Ruler of Dubai. 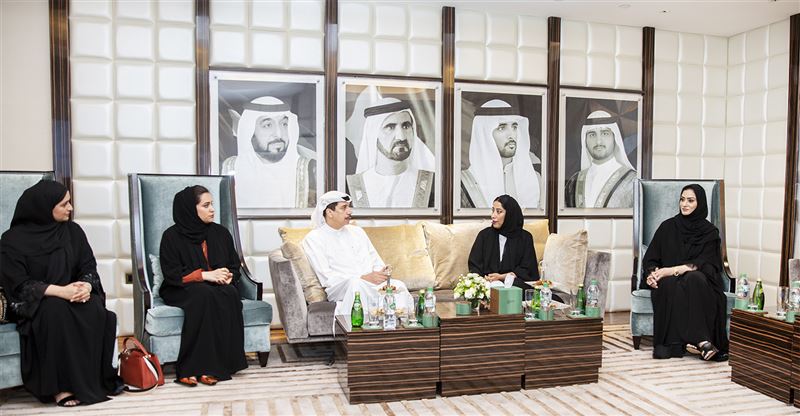 Her Excellency added that there has been significant progress in women’s participation in boards as a result of cooperation and strategic partnerships with various entities, including the Securities and Commodities Authority and Dubai Financial Market.

Both organisations signed a memorandum of understanding to activate the ‘Women on Boards’ initiative, which was launched by Her Highness Sheikha Manal bint Mohammed bin Rashid Al Maktoum, President of the UAE Gender Balance Council and Dubai Women Establishment, and wife of HH Sheikh Mansour bin Zayed Al Nahyan, UAE Deputy Prime Minister and Minister of Presidential Affairs, to increase the representation of women in boards in the public and private sectors.

The UAE Cabinet in 2012 approved a decision to make it mandatory for corporations and government entities to include women on their boards of directors, making it the first country in the region, and the second in the world after Norway, to enact such legislation.

HE Mona Al Marri said the results of the initiative were positive - female representation in federal government leadership positions increased to 17% in 2018, while the number rose to 4% in companies listed on the Dubai Financial Market in 2017.

Her Excellency said she hopes this number will continue to grow, especially with the increasing awareness of the vital role women play in the national economy, as well as in achieving national goals, underscoring their importance as key partners in development.

She stressed that the rise of women in leadership positions also enhances the country’s ranking in global indicators in gender balance, adding: “We are in constant contact with Dubai Financial Market and public shareholding companies to support this initiative. This is in line with global examples that demonstrate that the presence of women in leadership positions positively impacts the performance of companies. We have compiled a database of women leaders which is constantly being updated. Furthermore, whenever a company wants to appoint women in their governing bodies, we announce this through various media channels.”

During the event and as part of joint initiatives with the DWE, the DFM launched its new eBoard platform, an online linkage between listed companies and UAE nationals looking to assume board memberships.

The platform enables proficient UAE nationals to identify board membership opportunities on DFM listed companies and submit their nomination directly to these companies through the platform.

This initiative enables listed companies to benefit from the diverse pool of UAE talent and ultimately enhances the efficiency of the board of directors.

The DFM also signed the UN Women’s Empowerment Principles and invited its listed companies to join forces and sign the principles, underlining their commitment to empower women.

It is noteworthy that female investors have a strong presence on the DFM with their number reaching 246,000 by the end of 2018, representing 29% of DFM’s large investor base of approximately 844,000.

DFM is one of the leading UAE financial institutions that is at the forefront of empowering women. Women have played a major role in the progress of the organisation and account for 58% of its workforce. Women also efficiently run many of DFM’s divisions and departments.