Nasdaq Dubai has celebrated the achievement of Hazza Al Mansoori, the UAE's first astronaut, acknowledging him on the Nasdaq tower in Times Square, New York.

Nasdaq is one of the world's largest exchanges in terms of market capitalisation.

The stock market building mural, displayed Emirati astronaut's picture in space suit, flashing a victory sign and celebrating the country's journey to the space, a privilege enjoyed by only few countries.

Hazza spent eight days in space on board the International Space Station, ISS. He conducted 16 scientific experiments, and 6 of them were in microgravity.

Al Mansoori, accompanied by backup astronaut, Sultan Al Neyadi, landed at the Presidential Terminal of Abu Dhabi International Airport onboard a presidential flight earlier today, and received a hero's welcome after a successful expedition to the International Space Station.

Sheikh Mohamed congratulated Al Mansoori on his successful return, commending his strong will and high spirits across the entire stages of the historic mission, which, the Crown Prince of Abu Dhabi, said "showed the true metal of the Emirati people and their determination to contribute to the advancement of humanity at large." He also hailed the sincere and supportive feelings displayed by backup astronaut Sultan Al Neyadi across the expedition.

"You both are role models for the type of youth we are betting on in our steady march on the path of progress. You're a model to be emulated by those Arab young people sincerely working for the advancement of their nations," Sheikh Mohamed addressed the two astronauts.

"When the UAE launched its space programme, our determination was, and still, to carry it out by Emirati hands and minds. And therefore I have been determinedly working for grooming qualified national cadres willing and ready to explore the space and get well-versed with its sciences, being an integral part of our drive toward achieving sustainable development and building a knowledge-based economy," he added. 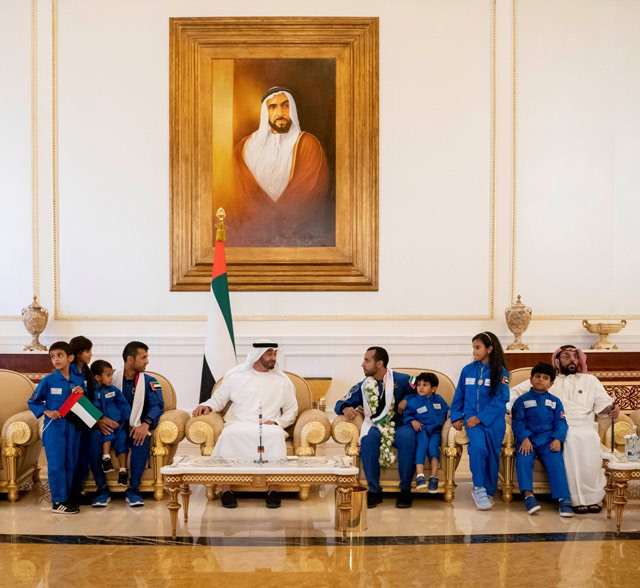 "The UAE, since the era of the nation's Founder late Sheikh Zayed bin Sultan Al Nahyan, has always been considering its people as its true wealth. Our investment in our most cherished assets are the ideal investment for our present and future," he said, noting that Hazza Al Mansoori and Sultan Al Neyadi, along with their colleagues at the National Space Programme, have laid down a solid basis for the nation's space ambition to reach Mars.

He urged the astronauts to spare no effort over the coming period to achieve the UAE' space ambition, expressing confidence in their capabilities to deliver the future, survive all besetting challenges and continue to be a source of inspiration for Emirati youth.

Sheikh Mohamed gave Al Mansoori a neatly folded UAE flag as a gift as Al Fursan, the UAE Air force's aerobatic display team, performed a flyover, painting the sky with the colours of the country's banner.

The two astronauts were greeted by an Emirati troupe dancing the traditional ayala before walking beneath a sign bearing their images and reading "welcome home, pride of the nation."

Inside the airport, a large number of sheikhs and senior officials welcomed the heroes along with scores of schoolchildren who applauded their return and excitedly waved flags.

Hazza and Al Neyadi thanked Sheikh Mohamed for the gesture of receiving them at the airport, saying it was an honour to be supported and encouraged by the country's leadership.

Hamad Obaid Al Mansouri, Chairman of the Mohammed bin Rashid Space Centre, MBRSC, said the success story of the first Emirati astronaut to go to space has inspired the young generations in the UAE and the Arab world. He added that Hazza's mission was the UAE's first step to exploring the space.

Upon his return to earth, medical tests were conducted on Hazza and confirmed he is in good health.

Hazza spent eight days in space on board the ISS. He conducted 16 scientific experiments in cooperation with international space agencies, including the European Space Agency, the Japan Aerospace Exploration Agency, and the Russian Space Agency Roscosmos. Six of these experiments were conducted in microgravity.

The experiments included studying the reaction of vital indicators of the human body aboard the ISS, as well as other physical, biological and chemical experiments. Al Mansoori is the first astronaut from the Arab region to participate in such research.

The UAE Astronaut Programme is funded by the ICT fund of the Telecommunication Regulatory Authority.

Launched in 2007, the fund, which is the first of its kind in the Arab world, aims to support research and development within the ICT sector in the UAE, to help it grow into a nationally significant and world-leading industry.