Emirati entrepreneur Nashwa Al Ruwaini was one of the winners of the Mother Teresa Memorial Award for Social Justice 2018.

She won the award for her philanthropic efforts to revolutionise the condition of women in the Middle East, as well as for the charitable activities she undertook to improve the lives of women and children through her humanitarian organisation, the Nashwa Foundation. 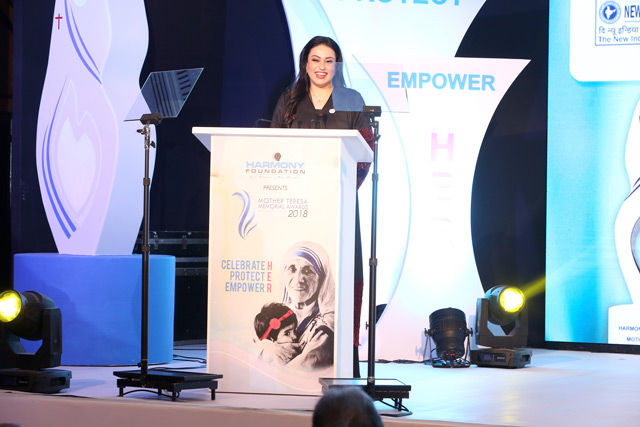 Al Ruwaini was presented with the award in Mumbai, India, at a ceremony organised by the Harmony Foundation following a conference themed, 'Protect Her Empower Her', which focused on the empowerment of girls. Al Ruwaini spoke about the importance of lobbying for laws, society and technology to protect and empower young women a cause Al Ruwaini is dedicated to. She received the award from the great-grandson of the legendary Mahatma Gandhi, Tushar Arun Gandhi, in the presence of Mohamed Al Jalah Al Teneiji, the UAE Consul-General in Mumbai. She is the first Emirati woman to win this award.

Al Ruwaini is currently a board member and CEO of Pyramedia Group and Chairwoman of the Nashwa Foundation, a charity that is dedicated to philanthropic works across the Arab world.

She said, "It is such a great honour to win this accolade, which I am extremely proud of. It is very dear to my heart. Mother Teresa is one of my favourite role models. I aspire to be just as charitable and this award serves as a reminder that I need to continue my philanthropic work, which is just as important as my professional career. I believe that it is my role and purpose to always give back to the community, especially to women and young girls, so that they can lead healthy lives and not be subjected to any form of oppression or injustice. I will continue to work towards this goal, especially in the Middle East."

She also added that under the wise guidance of the UAE leadership, especially H.H. Sheikha Fatima bint Mubarak, Chairwoman of the General Women's Union, Supreme Chairwoman of the Family Development Foundation and President of the Supreme Council for Motherhood and Childhood, women are provided with all the necessary resources and systems, allowing them to succeed, fulfil their goals and be an integral and significant part of the society. She wished the same success to other women and young girls in the region.

This year other awardees alongside Nashwa Al Ruwaini included the winners of the Nobel Peace Prize 2018 Nadia Murad, a Yazidi survivor, and Denis Mukwege, a gynaecologist who provides medical, legal, psychological and economic support to survivors of rape.

Other awardees of the Mother Teresa Memorial Award for Social Justice 2018 include Dr. Oby Ezekwesili, a Presidential candidate in Nigeria and an ardent and passionate advocate, who is a ray of hope for women against Boko Haram; Sister Lucy Kurien, who has worked passionately to restore the dignity of destitute women so they can lead normal lives; Salman Sufi, who introduced reforms that have provided legal, medical and counselling services to women who are victims of violence; Laxmi Aggarwal, a prolific campaigner and active voice for the victims of acid attack, and many others who have played a pivotal role in human rights and are fighting for women across the globe.