Pledge to hang-up your mobile when driving

The 30th GCC Traffic Week 2014 kicks off  today [Sunday] with the theme ‘Our goal is your safety’. Held under the patronage of Lt. General Sheikh Saif bin Zayed Al Nahyan, Deputy Prime Minister and Minister of Interior, the event runs until March 15.

The event will see the participation of delegations from the GCC countries. It aims at ensuring the safety of people, reducing the number of traffic accidents and finding solutions to different traffic problems

Six traffic awareness documentary films will also be part of the GCC Traffic Week events, with a view to involve the public in traffic safety issues.

Brigadier Hussein Ahmed Al Harithi, Director of Traffic and Patrols Directorate at Abu Dhabi Police, stated that the new community-based initiatives aim to engaging all segments of society in the to create and activate innovative traffic campaigns over the course of the year.

He explained that the new initiatives will include 12 traffic safety concepts for each month. These include, “The road belongs to everyone”, “Let us be like them”, “A baby is in your vehicle”, and “You are the backbone of this country”, to name but a few; in addition to other initiatives that will be announced during the GCC Traffic Week.

“The new social initiatives will also include ‘the traffic creativity council’, which will invite committees from different walks of life to discuss traffic issues, leading to more cohesion in society regarding traffic issues,” Brigadier Al Harithi added.

While exemplary male and female drivers will also be honoured during the week, four  winners from Abu Dhabi Police’s Traffic and Patrols Directorate’s ‘Together’ program to reduce traffic accidents will also be honored.

Drivers and passengers taking the pledge will commit themselves to the following 4 points:

Vox Cinemas, as part of their CSR strategy, support this initiative for a full year by screening road safety videos and the invitation to sign the pledge.

The full details of this initiative can be found on https://www.roadsafetyuae.com/pledge-make-uae-roads-safer/

The conference will discuss the outcomes of national and international researches, studies, and experiences.

It will also feature 40 work papers submitted by internationally recognised keynote traffic safety experts and specialists from the US, Greece, Canada, Belgium, KSA, Egypt, China, and the UAE. 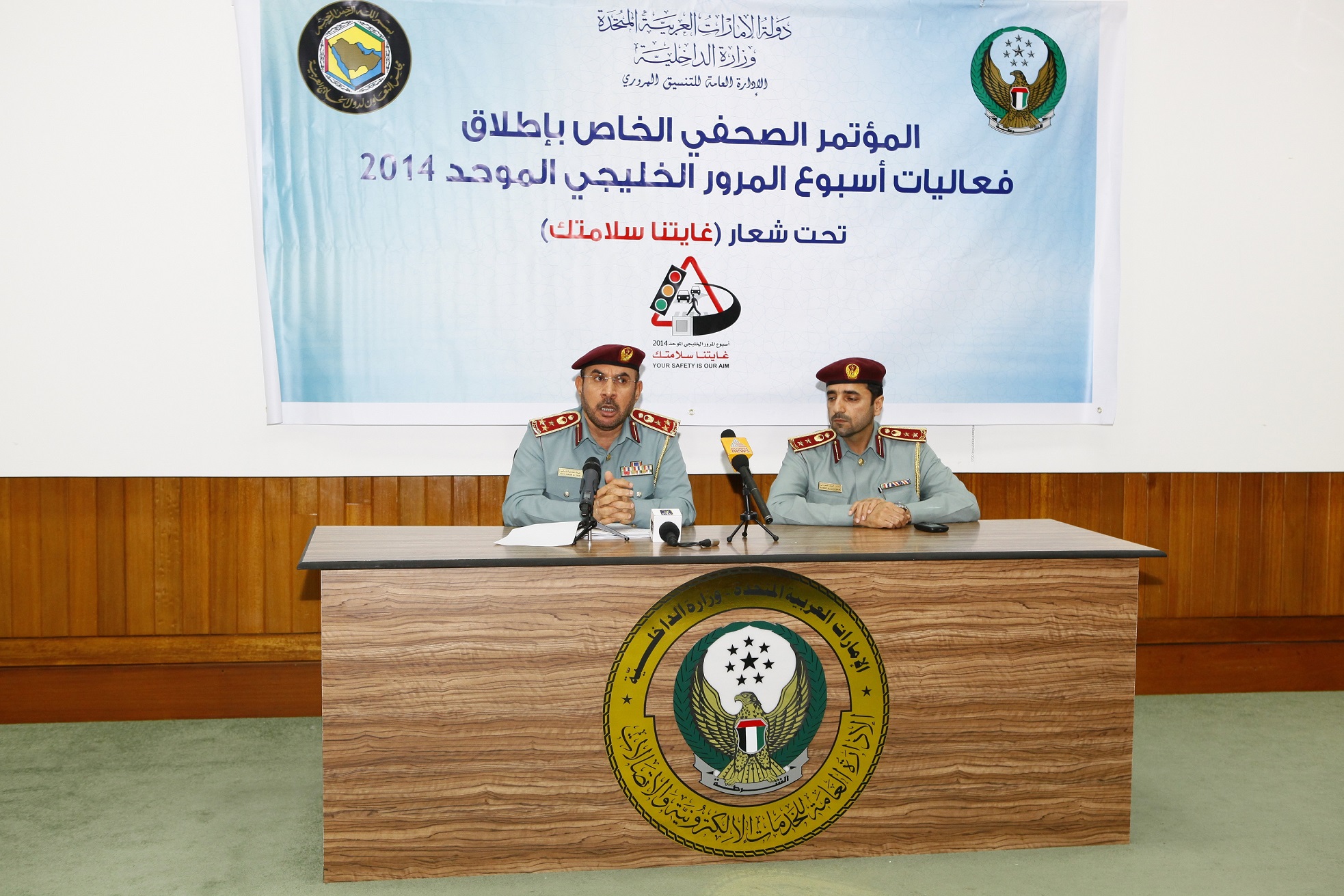 Officials at the press conference

Brigadier Gaith Hassan Al Zaabi, Director General of the Traffic Coordination Department at the Ministry of Interior, said, “Traffic accidents at the countrywide level have dropped by 23.52 per cent in the past three years; from 6,700 accidents in 2011 to 5,124 accidents in 2013. Due to this significant decline, the number of traffic accident fatalities dropped from 720 in 2011 to 651 fatalities in 2013, a drop of 9.58 per cent. While serious injuries because of traffic accidents dropped from 7808 to 7743, a drop of 0.83 per cent compared to the same period.

"Traffic indicators have witnessed a significant decline across the country during 2013, thanks to the police leadership’s directives and its constant follow-up," said Brigadier Al Zaabi. Moreover, he noted that the MoI is exerting significant efforts to reach an average of 5.50 deaths per 100,000inhabitants, according to the 2014-2016 strategy, prior to achieving an average of 3 deaths per 100,000 inhabitants in 2021.

Brigadier Al Zaabi referred to the main causes of road accidents during last year: “According to statistics, sudden swerving was the key reason behind traffic accidents, and accounted for 1048 accidents. Misjudgment of road users ranked second leading to 668 accidents; followed by failure to leave sufficient safe distance between vehicles, which caused 573 accidents. Entering a road without making sure it is clear ranked fourth, causing 409 accidents, over speeding ranked fifth and resulted in 368 accidents, followed by lack of attention in sixth place, which led to 366 accidents. Jumping red traffic signals resulted in 365 accidents; failure to comply with lane rules led to 334 accidents; and 993 miscellaneous accidents.”

Brigadier Al Zaabi noted that the events will be promoted through different media outlets, such as radio stations, newspapers, magazines, TV channels, as well as the internet, to reach the largest number of people. The campaign’s slogan will be posted on a number of websites and social forums, along with statistics on traffic accidents, the relevant legal material, and details of the media campaign on other media outlets.

Radio talk shows will be scheduled and will host a number of officials from the Traffic Directorate. The shows will answer any queries by the public regarding the campaign’s slogan, explain the relevant laws, and highlight the media efforts by all concerned parties. They will also highlight the role of the Ministry of Interior and other institutions concerned with the campaign. Campaign-related posters, brochures, and awareness leaflets will be distributed in a number of public places.

Brigadier Al Zaabi noted that a visit schedule was established for GCC Traffic Directorates’ delegations to the Traffic Directorates across the UAE. A number of officers and warrant officers from the different Traffic and Patrols Directorates have been dispatched to GCC states to take part in the activities and events organized by these countries to mark this occasion.