The new luxury patrol cars of Dubai Police - Mercedes SLS, Bentley Continental GT Coupe, Aston Martin ONE77, Lamborghini Aventador and Ferrari - are displayed at the Arabian Travel Market in Dubai starting from May 6-9.

Major General Khamis Mattar Mazinah, Deputy Commander-in-Chief of Dubai Police, explained that the move for the new additions stems from Dubai Police's keenness to keep pace with the outstanding development witnessed by the Emirate of Dubai, which has become a magnet for tourists, investors and entrepreneurs. 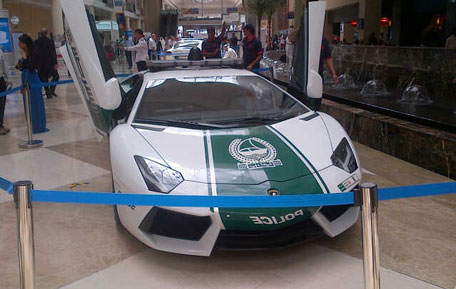 He stressed that the General Command of Dubai Police is keen to harness all its potential to continue the march of development, upgrading the security services, and being a key partner in the continuation of Dubai "city of luxury and sophistication" in all its services.

Maj Gen Mazinah stressed that the luxury patrol car initiative is intended also as a tourist attraction at the ATM, which contributes to the increased interaction of the members of the public and visitors, in addition to promotion of Dubai Expo 2020 bid.

He stressed that the General Command of Dubai Police is keen to achieve the objectives of the Expo, through the presentation of luxury cars, which form the sophisticated interface for security framework in the city.

He stressed the ability of the UAE in general and Dubai in particular to host such international events.

The Bentley,  Mercedes SLS and the Dh11-million Aston Martin One-77 are set to join the elite Dubai Police patrolling fleet, a Dubai Police source has confirmed to Emirates 24|7.

In May, images surfaced online indicated that an Aston Martin One-77 was to join the Dubai Police fleet following a leaked image in April showed a Bentley and a Mercedes SLS ready to get a makeover to join the police patrol squad.

There are only seven Aston Martin One-77 in the world, with a price tag of Dh11 million; which was the asking price of the car that was put up for sale at the Al Ain Class Motors following the car’s launch at the Geneva Auto Show in 2012.

On Sunday, a picture tweeted by Khalid N Alrazooqi, a DNRD employee, shows a decked up Bentley and Merc with the police insignia with a number plate 4 and 5. Dubai Police is yet to officially release the pictures.

Chevrolet Camaro, a BMW 5 series, a Lamborghini Aventador and a Ferrari FF are part of the elite patrolling fleet. Last month, Dubai Police had unveiled images of the Camaro and the Beemer 5 series on its official Facebook and Twitter accounts, as part of a public campaign to spruce up the supercar patrolling fleet.

The Lamborghini Aventador took to the streets with its number ‘8’ license plate last month followed by the Ferrari FF.
Dubai Police Chief Lt General Dhahi Khalfan Al Tamim has said the luxury sports cars were slated to be used for security purposes with the Ferrari FF being driven by female patrol officers.