Residents wake up to lightning, rain on Sunday

UAE residents woke up to overcast skies, lightning and slight rain on Sunday morning. The roads are wet and motorists are warned to drive carefully.

The skies are cloudy and authorities have urged office-goers to respect traffic rules and drive safe.

The weather is expected to be partly cloudy in general today, with the cloud cover increasing over the islands and some northern and eastern areas.

According to the National Center for Meteorology and Seismology (NCMS), the amount of clouds will increase over scattered areas, with a chance of rain. A slight fall in temperatures is also expected over some areas .

Winds will be moderate in general, fresh at times. However, it may kick up dust in some internal areas.

Sea will be moderate becoming rough gradually by night .

Meanwhile, the maximum temperature in some internal areas will hit 44 degree C, with a minimum of 23 degree C.

Humidity is also expected to touch 95 per cent in coastal areas.

Rain in forecast for the next couple of days in the Emirates. 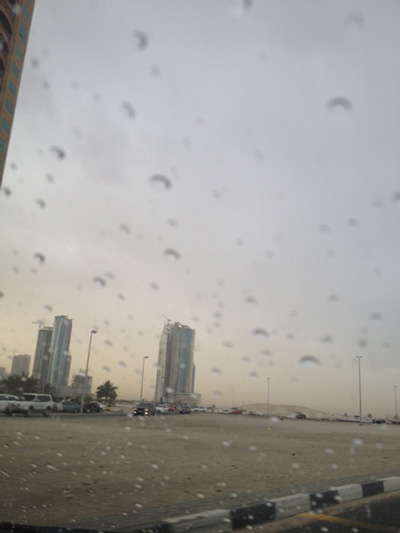