Three residents of the Al Hafeet Tower in the Al Tawun area of Sharjah are reported to have been arrested on charges of causing fire that damaged one section of the 20-floor residential tower. 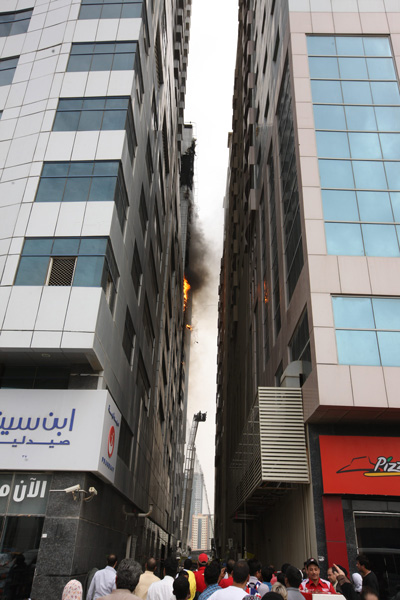 “Three residents who hail from an African country have been detained on charges of causing the fire. They were trying to make hookah fire. Sparks from the hookah coals touched off fire in the aluminium foils that covered the building façade and soon it spread very fast through the areas covering the piped gas line,” said residents who witnessed the fire.

After the sparks caused flames on the aluminium foils, onlookers tried to alerted them but the three allegedly fled the scene after locking the door of the apartment. It was difficult to reopen the locked door as part of the fire-fighting exercise, said the sources.

The fire, which was brought under control within one hour yesterday by fire-fighters from Sharjah and Dubai, has left over 80 families seeking shelter in their cars and friends’ houses after the building was rendered unsafe due to the fire. Read more...

Total Car Service Centre near Adnoc Petrol Station in Al Khan was damaged in a fire that caused panic among workers living in adjacent buildings. The second fire in Sharjah on the same day caused panic among residents and created traffic jam along Dubai-Sharjah roads.

Al Hafeet Tower 2 is located a few blocks away from the Al Bakar Tower 4 that caught fire last year, displacing more than a hundred families.

Stranded families from the Al Bakr Tower had a tough time as they were not allowed to return to the building for a few days and water and electricity was resumed only after thorough investigation by Civil Defence.

Now, residents of the Al Hafeet Tower face a similar situation, as insurance claim will be settled with the owners of the apartments only after the cause of the fire is ascertained.

Some of the residents reportedly slept in their four-wheel drives while others looked for accommodation elsewhere.

The fire forced evacuation of the two towers of Al Hafeet Tower leaving 80 residents almost homless. While no casualty was reported, some residents who inhaled smoke were treated. The fire destroyed ten floors of the 20 storied building, but the fire was contained by the joint effort of Civil Defence teams from various Emirates.

“We had to spend the whole night in our car because of the fire. My wife and kid were alone at the time of the fire. They called me on my mobile and when I reached home, everything was in a mess. I decided to spend the night in my car, because I did not have many friends who could accommodate another family,” said an Indian resident of the tenth floor.

“We were outside the building and when we returned home after picking my children from the school, everything in our flat was burnt. We are not allowed to enter the flats as the Civil Defence will have to certify that the flats are safe,” said another resident on the tenth floor. Many flats located on the fire-affected portion of the building have lost their household appliances and other items.