His Highness Sheikh Mohammed bin Rashid Al Maktoum, Vice President, Prime Minister and Ruler of Dubai, said that the UAE is deeply committed to working closely with the rest of the world to serve humanity. The UAE is keen to share success stories and experiences with other governments to help enhance people’s lives, he added.

The meeting was also attended by Mohammad bin Abdullah Al Gergawi, Minister of Cabinet Affairs and The Future, and Ohoud bint Khalfan Al Roumi, Minister of State for Happiness and Wellbeing, along with senior officials.

"Building partnerships with world governments reflects the international policy of the UAE under the leadership of President His Highness Sheikh Khalifa bin Zayed Al Nahyan. We seek to share our unique model and innovative strategy for governance with the world as well as our success stories," Sheikh Mohammed said. 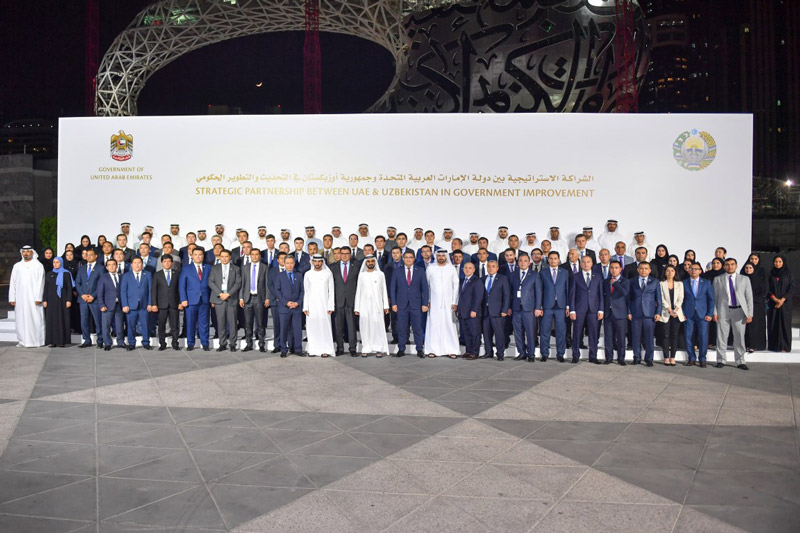 He welcomed the Uzbekistan delegation and praised the relationship between the two countries. "Just a few weeks ago I met with Uzbek President Shavkat Mirziyoyev. Today, we received a high level government delegation who is visiting the UAE to put in place mechanisms and detailed plans to implement a strategic partnership agreement signed between the two countries," he added.

His Highness also praised the spirit of teamwork that characterised the meetings of the joint task forces formed to implement the agreement. The visit of the Uzbek delegation, which included 60 senior officials, is taking place less than a month after the signing of a strategic partnership agreement between the UAE and Uzbekistan governments The delegation visited several UAE government entities and held joint meetings and workshops on issues of mutual interest. The partnership is focused on developing ways to apply best practices in government services and smart services, institutional performance, innovation and excellence, and leadership and capacity building.

Under the terms of the agreement, the two countries have formed 19 expert task forces to launch 57 joint initiatives in 2019 that will support the implementation of a business model aimed at helping identify solutions to future challenges facing the Uzbekistan government.