Dubai through the eyes of Ali: World Expo 2020

The London-based International Centre for Development Studies stated that the city of Dubai has more competitive advantages than other cities competing on hosting Expo 2020.

The report explained that the hosting of Expo 2020 in Dubai will have great economic impacts on the Gulf States and the whole region.

According to the report the revenues of Dubai’s Expo 2020 expected to reach $37 billion and will contribute to higher rates of economic growth in the region.

The report predicted that Dubai’s Expo 2020 will promote SME with a growth rate close to 4% of annual GDP and increase commercial, tourism- and cultural activities as well as the growth of multiple sectors such as banking and services sectors.

It also contributes to the achievement of returns on the tourism sector in the region with $ 8.5billion Coincided with the huge budgets allocated by the Gulf States to support the infrastructure.

The report indicates that the strategic geographical location and the stable social environment in addition to the promising economic climate and diverse population are all factors that make Dubai’s opportunities larger than other competing cities.

According to the report Dubai had earmarked nearly $5 billion to support its infrastructure and working constantly to increase the capacity of its airports. Dubai’s Expo 2020 visitors to is expected to reach more than 30 million visitors and expected to enhance the economy with $28 billion.

The report shows that the city of Sao Paulo in Brazil is Dubai biggest rivals to host Expo 2020. Sao Paulo which has 20 million people constitutes 12% of the total GDP of Brazil. But the city has only 40 thousand hotel rooms, which is not enough when compared with the demand growing at a rate of 10% on an annual basis. Sao Paulo is also suffering from a financial deficit estimated to $19 billion annually and this could affect the provision of adequate support for the event.

The Russian city of Yekaterinburg, which has allocated more space to host the exhibition up to 587 hectares, is expected to attract nearly 45 million visitors in the period between April to October 2020. But the city, according to the report, does not have the appropriate infrastructures which make it able to host the event.

The report shows that Izmir, which is largest city in Turkey and home to nearly 4 million people, needs nearly $ 50 billion to support infrastructure and suffers from high unemployment levels reached 16.5% with no jobs to absorb the migrant workers.

The city of Ayutthaya in Thailand is expected to attract nearly 200 thousand visitors a day in 2020 with a return of $2.06 billion.

But the city, which plans to spend $6 billion to support infrastructure, has only three thousand hotel rooms. This figure raises serious doubts about Ayutthaya’s ability to host Expo 2020 especially because the city was unable to secure the Indoor Football Cup last year. 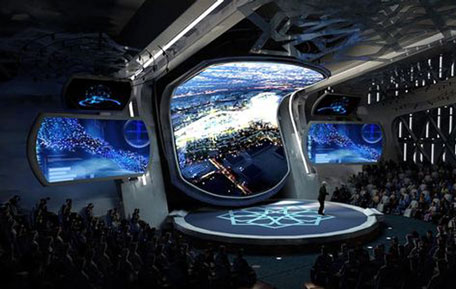 And finally the report considered Dubai theme to host Expo 2020 "Connecting minds, creating the future ", the best among other competing themes.

The selected theme reflects clearly the objectives of the event and addresses the global dimension of the exhibition devoted to the idea of communication between peoples.

It is also dealing with the importance of the human mind and creativity to make a better future economically and culturally.