Latest: The NCMS has forecast that strong winds are likely to turn the seas rough again by noon today. While the weather will remain fair overall, morning mist over Sweihan and Liwa will has given way to a sunny day.

The National Centre for Meterology and Seismology (NCMS) has litfed its "rough seas" forecast for the next 24 hours, tweeting that the sea will be moderate in the Arabian Gulf. The fog alert is still in place, however, with humidity forecast to increase.

The lowest temperature recorded in the UAE yesterday was on the Mebreh Mountain - 3.6 degrees Celsius at 5am.

The National Center of Meteorology and Seismology (NCMS) has forecast fog for tomorrow (Tuesday) and cautioned drivers of low visibility.

The lowest temperature recorded this morning, however, was 4.8 deg Celsius at 6.15am. Where? Jais Mountain, tweeted NCMS.

According to the NCMS, the weather today (Monday) is expected to be partly cloudy with moderate winds sometimes kicking up.

The lowest temperature recorded in the UAE this morning was -0.3 deg C on the Jais Mountain this morning at 00.15am, the NCMS tweeted on Saturday.

The NCMS, in its forecast for Sunday added rough seas in the Arabian Gulf to the chilly climes and for Monday and Tuesday, forecast mist and fog along with the seas staying rough. 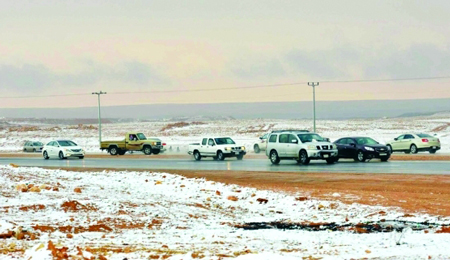 Snow in Saudi Arabia due to a 13-day current cold wave. (SPA)

Strong northwesterly winds have swept across the UAE, blowing up sand and debris on the roads and reducing visibility.

A tree in the residential community of Karama, in Dubai, was seen uprooted.

No injuries have been reported.

The UAE'S weather office has issued a weather alert, warning of wind speeds reaching highs of 65kms per hour.

The UAE’s National Center for Meteorology and Seismology (NCMS) has also stated Friday will be relatively cooler than this week’s average, with a four-degree drop in Mercury.

Speaking to Emirates 24|7, a spokesperson with NCMS stated this weather pattern was ‘working together’ with the high pressure system that has brought snowfall and cold weather to Saudi Arabia and Kuwait over the past 24 hours. “The air mass over the north is cold, which, carried by the winds, is also facilitating the drop in temperatures over the country this weekend.”

While snowfall is not expected in the UAE any time soon, the increased cloud cover could give rise to light rainfall over the north and eastern parts of the country, limited to the mountainous areas, added the NCMS.

Meanwhile, those planning to make the most of the cooling climes and head out with their boats, should take heed as the NCMS has issued a marine warning for this weekend.

The weather forecaster stated: “We are expecting very rough seas in the Arabian Gulf and the Oman Sea with wave height reaching highs of 10 feet. This will be further fueled by wind speeds reaching 65kmph.”

While the UAE reaps the benefits of the cooling weather, Saudi has seen its northern border area blanketed by heavy snowfall over the past 24 hours, with Kuwait also experiencing light flurries in its western region.

Video: Cold spell in the Gulf to last for 13 days

Weather in UAE: Overcast skies and strong winds are forecasted for later today, with UAE residents being warned over unstable weather conditions.

The UAE’s National Center for Meteorology and Seismology (NCMS) issued the alert on Thursday morning, stating: “The NCMS warns against fresh to strong at times northwesterly winds.”

The weather forecaster also issued a marine warning, adding: “Very rough seas in the Arabian Gulf and the Oman Sea.” This weather pattern will continue into the weekend, with rainfall expected on Saturday across scattered areas of the country.

A cold front has been moving into the region, which has been dubbed in Saudi Arabia as ‘Talei Al Balda’ or the coldest winter.

Kuwait has reported snow in its western region, while Saudi Arabia’s northern border region has been blanketed by snow according to reports.

Saudi Arabia and other Gulf Arab countries are set to enter a 13-day cold spell that started yesterday, when temperatures felll to their lowest in the winter season, according to a well-known Saudi astronomer.

The period, dubbed in Saudi Arabia 'Talei Al Balda' is the coldest in winter and will witness rain and strong Northern and Northwesterly winds, said Salmal Al Ramadan, a member of the astronomy association in the Eastern Saudi province of Al Qateef.

He told the Saudi daily 'Sabq' that temperatures during this period would dip to an average 15 deg Celsius and to a minimum 7 deg Celsius during the weekend.

He said the cold spell would hit Northern and Eastern Saudi Arabia as well as nearby Gulf countries.