UAE Mars Mission: All you want to know about it

The UAE has unveiled its plan to send an unmanned probe to Mars in 2021 to study the atmosphere of the Red Planet.

The first Arab space probe to Mars has been named Al Amal, or ‘Hope’, and will create mankind’s first integrated model of the Red Planet’s atmosphere. 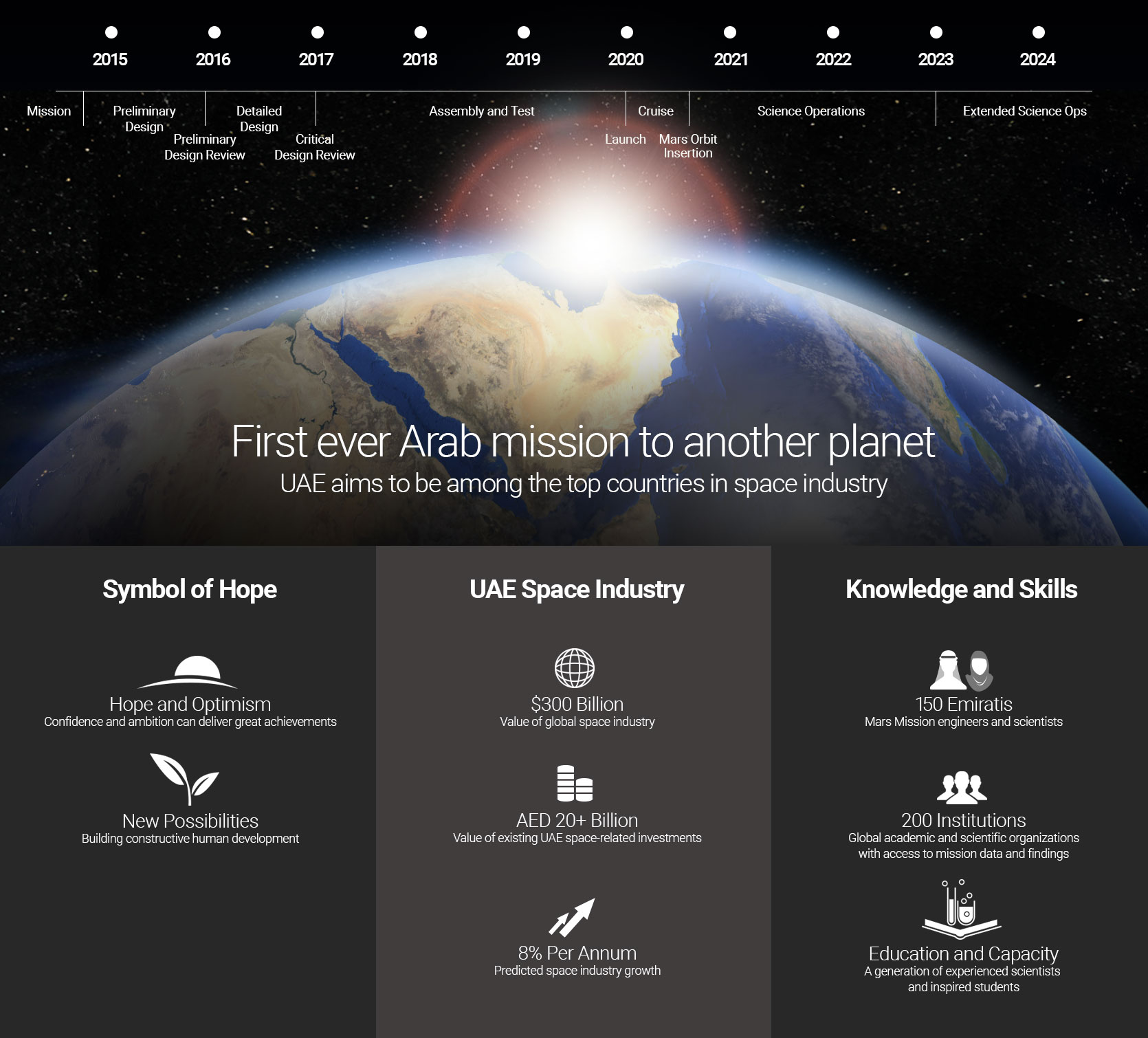 What will the UAE’s unmanned rocket look like, and how will it travel to Mars?

The probe will be a compact spacecraft the size and weight of a small car. It will blast off in a launcher rocket, then detach and accelerate into deep space. It will reach a speed of 126,000 kilometres per hour for the 600 million km journey around the sun to Mars, which will take around 200 days.

When will the UAE send the probe to Mars, and how long will it stay there?

The unmanned probe will leave Earth in 2020 on a mission designed to complement the science work of other missions and fill important gaps in human knowledge.

The probe will orbit the Red Planet until at least 2023, with an option to extend the mission until 2025. It will send back more than 1000 GB of data to be analysed by teams of researchers in the UAE, and shared freely with more than 200 institutions worldwide for the benefit of thousands of space specialists.

How is the UAE’s mission different from previous probes?

Its unique orbits and instruments will produce entirely new types of data that will enable scientists to build the first truly holistic models of the Martian atmosphere.

This mission will produce the first truly global picture of the Martian atmosphere. It will study how the lower and upper layers of the atmosphere interact with each other. It will search for connections between today’s Martian weather and the ancient climate of the Red Planet.

The Emirates Mars Mission will be the first to study dynamic changes in the Martian atmosphere throughout its daily and seasonal cycles.

Its specialised instruments will enable scientists to observe weather phenomena such as clouds and dust storms, as well as changes in temperature, dust, ice and gases including water vapour throughout the layers of the atmosphere.

They will learn for the first time how the atmosphere interacts with topography, from the highest volcano peaks to the vast deserts and the deepest canyons.

How will this new data be useful for scientists?

These models will help the global Mars science community to unlock more mysteries of the Red Planet, such as why its atmosphere has been decaying into space to the point that it is now too thin for liquid water to exist on the surface.

Today, almost all of our understanding of climate comes from scientific studies of the atmosphere here on Earth. Mars is a valuable laboratory for atmosphere science because conditions there are very different. The insights and data we gain from understanding the Martian climate will add new dimensions to human knowledge about how atmospheres work. This is important not just for Mars and Earth, but also for the millions of other potentially habitable planets recently discovered in our galaxy. Studying the atmosphere on Mars will help scientists evaluate distant worlds for conditions that might support life.

Can it lead us to any better understanding of our own planet, or planets other than Mars?

Besides deepening human knowledge about Mars, the data will also help climate scientists understand changes in Earth’s atmosphere over millions of years. This knowledge will also help space scientists to evaluate the atmospheres of thousands of newly discovered planets far across the galaxy, to determine which may have an atmosphere that could support extra-terrestrial life.

Can this be seen as a renaissance of Arab science?

The Emirates Mars Mission will leave behind a major legacy on Earth, because the mission is being planned and managed in the UAE by a 100 per cent Emirati team. In this way, it is designed as a catalyst for a new generation of Arab scientists and engineers, and as an anchor project for the growing science and space sectors.

The Emirates Mars Mission team currently comprises 75 Emirati engineers and researchers and will grow to more than 150 by 2020.