Abu Dhabi has just announced that driverless hover-jets will soon be seen levitating above Yas Island roads, ferrying passengers in an energy-efficient manner.

Miral, the firm responsible for the development and management of Yas Island, has signed an agreement with skyTran Inc., a Nasa Space Act company, to study and implement a personal rapid transit (PRT) system, for the first time in the Middle East on Yas Island, Abu Dhabi.

The idea behind SkyTran, a self-driving monorail that will hover 20 feet above roads at optimum speeds, could turn a two-hour car commute into a 10-minute trip.

The patented high-speed, low-cost, elevated PRT system built at the Nasa Ames Research Centre, will have cars zipping above traffic along magnetic lines from one destination to another, in a safe, timely and energy efficient manner across the Island, it announced.

The project aims to connect the current and future destinations on Yas Island and eventually link it to Abu Dhabi International Airport, Miral added, without offering a timeline.

SkyTran is headquartered at the Nasa Ames Research Centre near Mountain View, California.

“Innovation remains at the heart of what we do on Yas Island. While we continue to build world-class destinations and expand Yas Island, it is imperative that we are able to implement an urban transportation solution which is not only energy efficient but also adds another level of excitement to our visitors’ experiences,” said Mohamed Abdulla Al Zaabi, CEO of Miral.

“With skyTran, we have a partner who not only shares our vision for innovation in Abu Dhabi, but are developing a service which will transform the Yas Island experience, and grow our appeal to the millions of residents and tourists who visit us from the UAE and across the world,” he said. 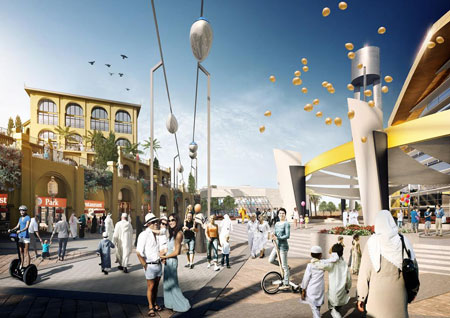 With the opening of the Warner Bros. theme park in 2018, visitors to Yas Island from around the world is expected to grow to over 30 million.

Miral said that as visitor numbers to Yas Island grow, skyTran’s design will allow for expansion of its network with ease, where more tracks can be installed and additional vehicles added to the network to manage increased demand.

The use of a sophisticated computer network enables vehicles to travel at optimum speed and spacing in a safe and efficient manner depending on passenger demand.

“SkyTran truly is a smart transportation solution for smart cities and we are proud to be able to bring this path-breaking technology to the Middle East for the first time. With our access to Nasa’s cutting-edge technology and expertise, we are able to introduce a solution on Yas Island which paves the way for Abu Dhabi to define the Middle East’s innovative mode of transport for the future,” said Jerry Sanders, CEO, skyTran.