They worked to bring food to the hungry, medicine to the sick and clean water to people living in areas without it.

Among the 157 people who died in the crash of an Ethiopian Airlines jetliner Sunday were dozens of international aid workers hailing from several countries in Africa and around the globe.

Described as dedicated and impassioned employees of nonprofit environmental, immigration and refugee organizations, they lost their lives alongside pastors, professors, ambassadors, police chiefs and respected writers and sports leaders.

All were on board the Boeing 737 Max 8 jetliner when it crashed shortly after takeoff from Addis Ababa, Ethiopia, en route to Nairobi, Kenya.
At least five Ethiopian nationals who worked for aid agencies died in the crash.

Save the Children mourned the loss of Tamirat Mulu Demessie, a technical adviser on child protection in emergencies who “worked tirelessly to ensure that vulnerable children are safe during humanitarian crises,” the group said in a statement.

Catholic Relief Services lost four Ethiopian staff members who had worked with the organization for as long as a decade.

The four were traveling to Nairobi for training, the group said.

Immaculate Odero of Kenya, who served as CARE’s regional security officer for the Horn of Africa, was “dedicated to keeping her colleagues in the region safe,” and took on her role “with great enthusiasm,” the agency said.

The Red Cross; The United Nations’ World Food Program; the International Committee for the Development of Peoples; the World Council of Churches; and Civil Rights Defenders, an international human rights group based in Stockholm, were among other humanitarian and cultural groups reporting losses. A family of six from Canada, African expatriates visiting families back home and tourists were also among the victims, who hailed from 35 countries.

Relatives of 25 of the victims had been contacted, Transport Minister James Macharia said.

“They are in shock like we are,” he said.

Both Addis Ababa and Nairobi are major hubs for humanitarian workers, and some had been on their way to a large U.N. environmental conference set to begin Monday in Nairobi.
At least 21 staff members from the United Nations were killed in the crash, said U.N. Secretary-General Antonio Guterres, who led a moment of silence at a meeting.
“A global tragedy has hit close to home,” Guterres said.

Irishman Michael Ryan was among the seven dead from the Food Program. The Rome-based aid worker and engineer known as Mick was formerly from Lahinch, County Clare, in Ireland’s west.

His projects included creating safe conditions for Rohingya refugees in Bangladesh and assessing the damage to rural roads in Nepal that were blocked by landslides.
“Michael was doing life-changing work in Africa,” said Irish premier Leo Varadkar.

Also a student of international business and economic law at Georgetown, Asiavugwa was remembered by family and friends as a “kind, compassionate and gentle soul.”
In Italy, the International Committee for the Development of Peoples mourned the loss of one its founders, Paolo Dieci.

“The world of international cooperation has lost one of its most brilliant advocates and Italian civil society has lost a precious point of reference,” wrote the group, which partners with UNICEF in northern Africa.

Joanna Toole of Exmouth in Britain’s Devon County, was heading to Nairobi to attend the United Nations Environment Assembly.

Toole, 36, was “bonkers” about animals her entire life, and her work “was not a job — it was her vocation,” according to her father, Adrian Toole, who said his daughter had traveled to the remote Faroe Islands to prevent whaling.

Karim Saafi was co-chair and “foremost brother” of the African Diaspora Youth Forum in Europe, the group said on its Facebook page.

The 38-year-old French-Tunisian, who left behind a fiancee, was on an official mission representing the group at the time of the crash, the group said.

Explorers, preachers, professors and police chiefs were among others who lost their lives.

Sarah Auffret, a French-British national living in Tromsoe, northern Norway, was a staffer with the Association of Arctic Expedition Cruise Operators.

She was on her way to Nairobi to talk about a Clean Seas project in connection with the U.N. Environment Assembly this week, the company said in a statement.

Abiodun Oluremi Bashu was an ex-ambassador and career foreign service officer in Nigeria, the Nigerian Ministry of Foreign Affairs said.

The department said it had received the news of his death “with great shock” and prayed for “the fortitude to bear the irreparable loss.”

Bashu was born in Ibadan, Nigeria, in 1951 and joined the foreign service in 1976. He had served in different capacities both at headquarters and foreign missions such as Vienna, Austria, Abidjan, Cote d’Ivoire and Tehran, Iran.

He also served as secretary to the Conference of Parties of the United Nations Framework Convention on Climate Change.

At the time of his death, Bashu was on contract with the United Nations Economic Commission of Africa.

Pius Adesanmi, a Nigerian professor with Carleton University in Ottawa, Canada, was on his way to a meeting of the African Union’s Economic, Social and Cultural Council in Nairobi, John O. Oba, Nigeria’s representative to the panel, told The Associated Press.

The author of “Naija No Dey Carry Last,” a collection of satirical essays, Adesanmi was director of Carleton’s Institute of African Studies, according to the university’s website. He was also a former assistant professor of comparative literature at Pennsylvania State University.

“Pius was a towering figure in African and post-colonial scholarship and his sudden loss is a tragedy,” said Benoit-Antoine Bacon, Carleton’s president and vice chancellor.

Investigators have recovered both black box recorders from the Ethiopian Airlines Boeing 737 that crashed just outside Addis Ababa, killing all 149 passengers and eight crew, the carrier said Monday.

"The Digital Flight Data Recorder (DFDR) and Cockpit Voice Recorder (CVR) of ET302 have been Recovered," the state-owned airline announced on Twitter.

Plane's black box is found but is damaged

Ethiopia's state-affiliated Fana Broadcasting Corporate reports that the black box has been found from the crashed Ethiopian Airlines plane.

An airline official, however, tells The Associated Press that the box is partially damaged and that "we will see what we can retrieve from it."

The official spoke on condition of anonymity for lack of authorization to speak to the media.

The plane crashed shortly after takeoff from Addis Ababa on Sunday en route to Nairobi.

Ethiopian Airlines said Monday it had grounded its Boeing 737 MAX 8 fleet after a crash that killed 149 passengers and eight crew.

"Following the tragic accident of ET 302... Ethiopian Airlines has decided to ground all B-737-8 MAX fleet effective yesterday, March 10, until further notice," the state-owned carrier said in a statement released on Twitter. 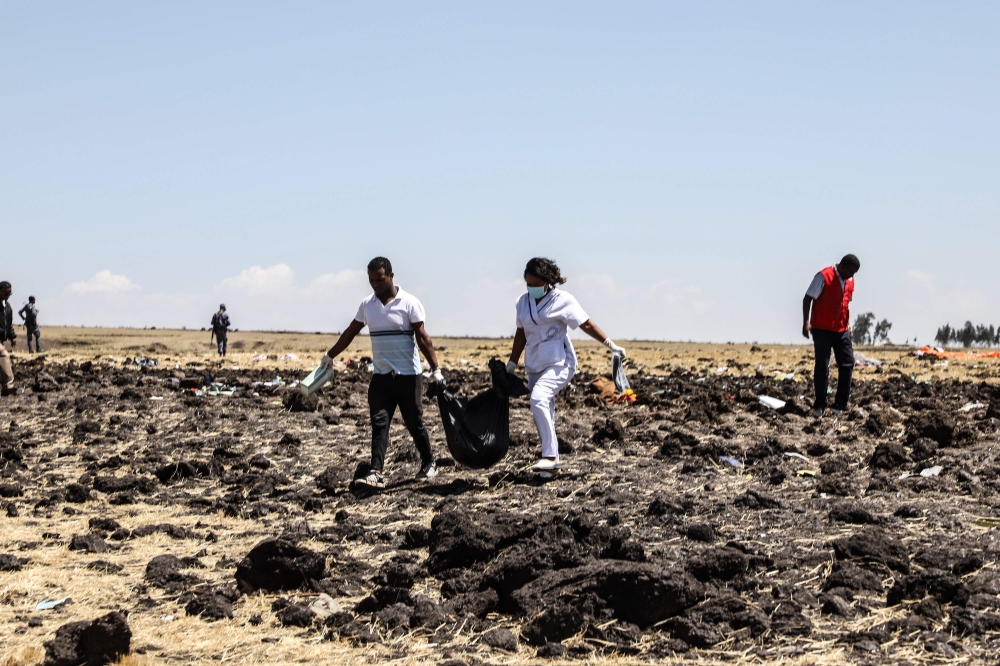 "Although we don't yet know the cause of the accident, we have to decide to ground the particular fleet as an extra safety precaution," said the airline, Africa's largest.

All 157 people on board died when Nairobi-bound Flight ET 302 came down just six minutes after taking off from Addis Ababa.

It ploughed into a field near Tulu Fara village outside the town of Bishoftu, some 60 kilometres (40 miles) southeast of the Ethiopian capital.

China also grounded its fleet of the Boeing 737 MAX 8 in the aftermath.

Among the dead were tourists, business travellers, and UN staff headed for a conference.