Recovery divers pulled five more bodies from the sea off the Thai holiday island of Phuket on Saturday, 48 hours after a boat capsized in rough waters killing dozens of Chinese passengers. 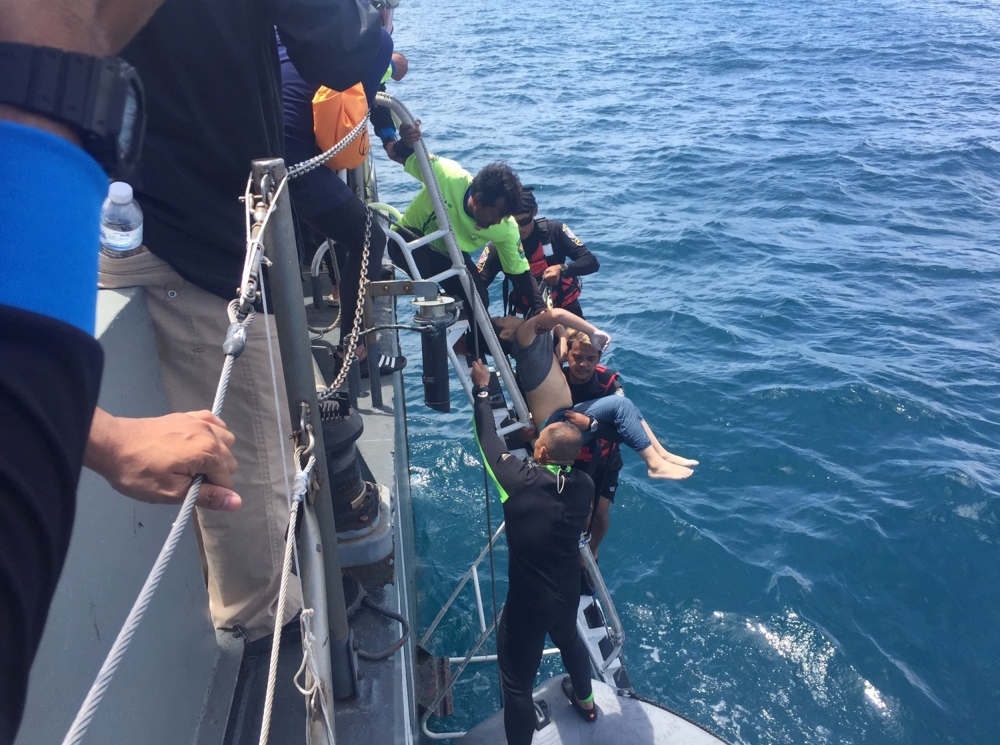 Many of the dead were found drifting in the sea, still wearing life jackets, several kilometres (miles) from where the Phoenix went down after being hit by five-metre (15-foot) high waves in a storm on Thursday evening.

It is one of the worst boat disasters in the recent history of Thailand, a nation with a poor health and safety track record despite being heavily dependent on tourism.

"Five bodies were found today and rescuers will continue to check the boat to see if there are any more bodies there," Phuket Governor Norraphat Plodthong said Saturday.

The three-decker Phoenix was carrying 105 passengers, mostly Chinese tourists, when it sank on the way back from a popular snorkelling spot.

Rescuers pulled some 37 bodies from the water on Friday and the Phuket provincial government has said the island's morgue is full, with Chinese authorities requesting 40 further refrigeration units.

Some 48 people - passengers and crew - were rescued on Thursday, while a Chinese woman was plucked from the churning waters Friday and rushed to hospital in Phuket after spending the night in the water.

Divers on Friday reported seeing "over 10 bodies" floating inside the hull of the boat, which is submerged 40 metres below the surface of the Andaman Sea.

"Of course we'll continue searching but the chances of survival are low. We will wait for the bodies to float to the top on their own," he said Saturday.

China's ambassador to Thailand, who travelled to Phuket, said Beijing had sent two search and rescue teams to help the Thai authorities.

"We aim to find the missing as soon as possible, as well as provide assistance to the injured, and family members of those involved, as well as help them make preparations for the next step," he said.

The Phoenix was among several boats that appeared to have ignored a warning in place since Wednesday against taking tourists on day-trips to the islands that dot the seas off the tourist magnet of Phuket.

It sank in rough weather a few kilometres off the coast of Koh He, an islet known for its coral formations.

Several other vessels hit trouble late Thursday, but all of their passengers were rescued.

Thailand is already in the global spotlight for a dramatic rescue mission in the north of the country, after 12 boys and their football coach were trapped in a cave complex.

Divers who entered the wreck of a tour boat that sank in a storm off the southern Thai resort island of Phuket described heart-breaking scenes of bodies of children found in the arms of their mothers, as a search resumed Saturday for some 23 mostly Chinese tourists missing.

The death toll from Thursday's tragedy hit 33, all of them Chinese nationals, in Thai tourism's biggest disaster in years.

"It's very difficult to see ... it's traumatic, it's tragic but the best thing to do, our job as divers, is to bring back the bodies to their families," diver Philip Entremont told reporters before resuming the search Saturday.

The boat, with 105 people, including 93 tourists, capsized and sank after it was hit by 5-meter (16-foot) high waves.

The death toll jumped Friday after the navy sent divers to the wreck on Friday. In images shortly after the sinking, rescued people sat in large rubber life rafts surrounded by churning seas.

Prime Minister Prayuth Chan-ocha, the leader of Thailand's military government, expressed his "sympathies and deepest condolences" to the families of the dead. The government will "exert all efforts to find those still missing and provide support to all survivors of this tragic event," he said in a statement.

Reports in Thai media said police charged the owner and captain of the stricken ship with carelessness causing death and injury.

Chinese Ambassador Lyu Jian had an "emergency conversation" by phone with Thai Deputy Prime Minister Somkid Jatusripitak, the Chinese Embassy said in a statement. It quoted the envoy calling on Thailand to quickly mobilize an intensive search for the missing and "to tend and make appropriate arrangements for the rescued Chinese tourists, treat and cure the injured and receive family members of the Chinese tourists involved."

Lyu said it hoped the cause of the capsizing would be quickly ascertained and asked Somkid to have the relevant Thai agencies closely cooperate with China on the matter.

Thai officials were rushing to cope with some of the logistics of the aftermath of the sinking.

At the request of Phuket's governor, the Phuket Tourist Association was seeking 80 volunteer Chinese language translators to assist the outgoing Chinese passengers at the provincial airport.

Many of the victims had been on group tours, booked in Phuket and China.

The government of the eastern Chinese city of Haining in Zhejiang province said on its official microblog account that it received a distress alert sent by phone text message from the head of the Haining Haipai Furniture Co. Ltd., from Thailand Friday morning.

It said that 37 of the furniture company's employees and family members had traveled together to Phuket and that on July 5 at around 5 p.m. they encountered the "biggest storm in five years" and they sought the government's help. The group had booked their tours to the islands online on their own, said the posting.

A Chinese tour operator based in the central province of Hunan said on its official Sina Weibo account that three travelers it had booked were missing.

Lazy Cat Travel said it had sent personnel to Phuket to help out its clients, who also included 35 passengers who had to be rescued from another boat that it had chartered that ran into trouble on Thursday. It said that second boat had lost power after being swamped by waves. All on board were returned safely to shore.

The accidents came as rescuers, also led by Thai navy divers, support 12 boys and their soccer coach stranded nearly two weeks inside a flooded cave in the country's far north, and try to determine how and when to extract them.