FlyBe plane crash lands on the runway at Amsterdam airport

The landing gear of a FlyBe Group airplane collapsed during landing at Amsterdam's Schiphol on Thursday, causing it to veer off the runway. There were no injuries, the airport said in a statement.

It was unclear if a heavy storm over the North Sea had played a role, a spokesman said. 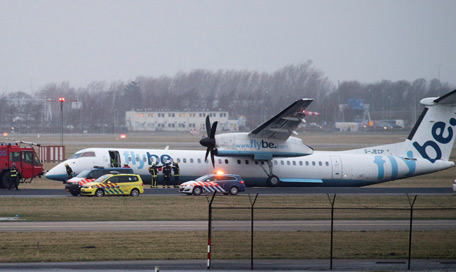 All 59 passengers and crew were brought from the runway to the terminal by bus, the statement said.

“We are working with the operator (FlyBe) to understand what happened,” Tucker said. “Our engineering teams are ready to assist.”