Former US first lady Barbara Bush died Tuesday at the age of 92, triggering an outpouring of praise for the matriarch of a Republican family once at the apex of American politics.

Barbara and George H.W. Bush were married for 73 years, and the widower "of course is heart-broken to lose his beloved Barbara," his chief of staff Jean Becker said in a statement.

"He held her hand all day today and was at her side when (she) left this good Earth."

The ex-president, who is 93 and has been in ill health in recent years, is "determined to be there" for his family while in mourning, Becker added.

Funeral arrangements were due to be announced soon for Barbara Bush, who was also survived by five of her children and their spouses, 17 grandchildren, seven great-grandchildren and her brother, Scott Pierce.

She was preceded in death by her second child, Robin, who died of leukemia as a toddler. 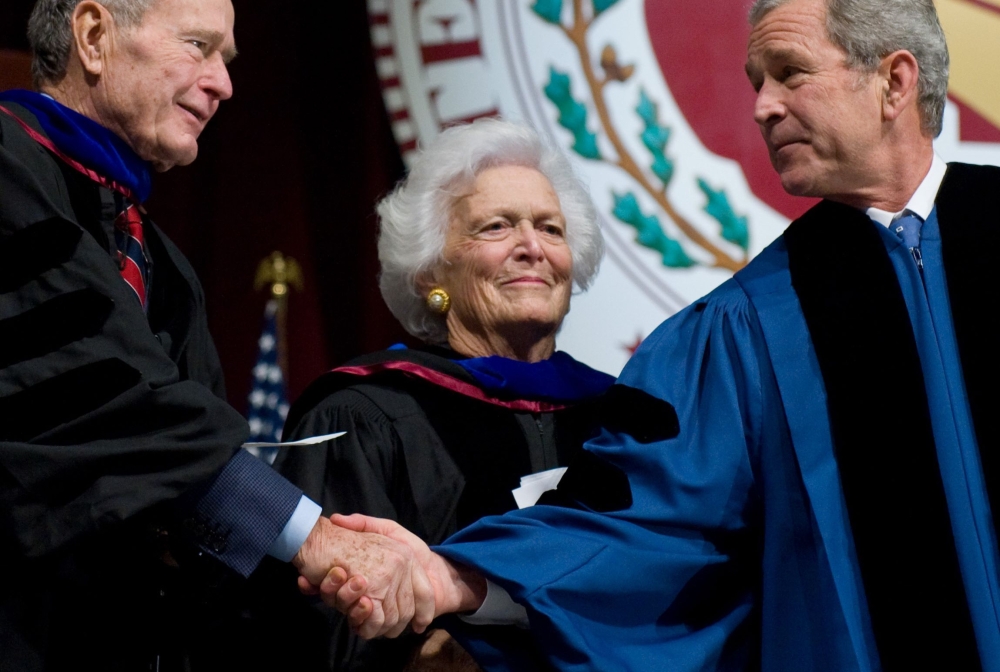 In honor of Bush's life, President Donald Trump ordered that the US flag be flown at half-staff until sundown on the day she is buried, at all public buildings and grounds, as well as military posts and vessels.

Bush has long been considered the rock at the center of one of America's most prominent political families, as the wife of a president and the mother to another - George W. Bush - and to Jeb Bush, a former Florida governor and onetime presidential aspirant.

She first met her husband-to-be at the age of 16 when she was a schoolgirl and he was a student at an elite preparatory school in Massachusetts. They married in 1945 while he was on leave from wartime service as a naval officer. The couple had six children.

As first lady, from 1989 to 1993, she embraced the cause of universal literacy, and founded a foundation for family literacy.

Tributes poured in from across the political spectrum to honor her life.

Trump hailed her as an "advocate of the American family."

"Amongst her greatest achievements was recognizing the importance of literacy as a fundamental family value that requires nurturing and protection," Trump said.

"She will be long remembered for her strong devotion to country and family, both of which she served unfailingly well."

Her son Jeb wrote: "I'm exceptionally privileged to be the son of George Bush and the exceptionally gracious, gregarious, fun, funny, loving, tough, smart, graceful woman who was the force of nature known as Barbara Bush."

And his son George P. Bush tweeted: "I will miss you, Ganny - but know we will see you again."

"Barbara inspired us all to be the best version of ourselves," said Orrin Hatch, America's longest-serving Republican senator.

Trump's Democratic predecessor Barack Obama and his wife Michelle said "We'll always be grateful to Mrs Bush for the generosity she showed to us throughout our time in the White House."

"But we're even more grateful for the way she lived her life - as a testament to the fact that public service is an important and noble calling; as an example of the humility and decency that reflects the very best of the American spirit," they added.

Madeleine Albright, who under Democratic president Bill Clinton was the first woman to serve as US secretary of state, remembered Bush as a "woman of incredible determination, wit and compassion who embodied America's best values."

Bush gained a reputation for toughness, wry humor and straight-speaking.

"She was smart, generous, kind, and a force to be reckoned with," said House Republican Steve Pearce.

Asked in 2010 about former Alaska governor Sarah Palin - who sought the vice presidency in 2008 - she told an interviewer: "I sat next to her once, thought she was beautiful, and I think she's very happy in Alaska, and I hope she'll stay there."

Senator John McCain, who is battling cancer and was at the top of the ticket with Palin a decade ago, recalled that "Barbara understood that the greatest joy in life comes from putting the needs of others before yourself."