The Château de Fontainebleau’s historic Imperial Theatre has reopened to the public, following years of restoration works made possible by contributions from the Department of Culture and Tourism - Abu Dhabi.

In recognition of Abu Dhabi’s contribution to the restoration, the theatre has been renamed as the Sheikh Khalifa bin Zayed Al Nahyan Theatre.

As part of the historic agreement between the governments of Abu Dhabi and France in 2007 - other components of which concerned the Louvre Abu Dhabi project - the contributions allowed for the full restoration of the theatre, in a further demonstration of the commitment to heritage preservation of President His Highness Sheikh Khalifa bin Zayed Al Nahyan.

The longstanding cultural cooperation between the two countries has also included the Conference on Safeguarding Endangered Cultural Heritage, and the establishment of the International alliance for the protection of heritage in conflict areas, ALIPH.

The first phase of the restoration was completed in April 2014 and saw the rejuvenation of the main auditorium, with 25 specialists and 135 craftsmen working on site to revive the theatre’s original décor. The second phase of renovation began in June 2017 with the focus turning to certain machinery, the upper levels of the salons and the podium upon which one of the most important stage sets in France has been preserved.

A masterpiece of French Second Empire architecture, the theatre was exquisitely designed by Hector Lefuel for the Imperial family between 1853 and 1856. It was used by Napoléon III on no more than a dozen occasions before its doors were closed for over a century, thus preserving it in its original state. Today, following the extensive restoration works, the Sheikh Khalifa bin Zayed Al Nahyan Theatre represents a museographic space dedicated to the performing arts and decorative arts of the Second Empire.

In a speech during the opening ceremony, Sheikh Abdullah bin Zayed, said that the reopening of Château de Fontainebleau’s historic Imperial Theatre, and its being named after President His Highness Sheikh Khalifa bin Zayed Al Nahyan, is a true embodiment of the strong ties between cultural institutions in their efforts to preserve national heritage sites. 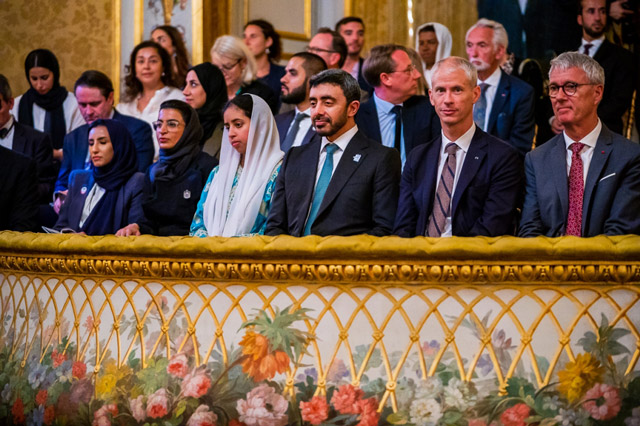 "These efforts are lesson we have carried forward from the Founding Father, the late Sheikh Zayed bin Sultan Al Nahyan," His Highness continued, adding they also represent the UAE's diplomatic efforts with over 187 countries to ensure an integrated and promising future for all.

Sheikh Abdullah went on to say, "This magnificent edifice, which today reopens its doors to the world after 100 years, represents France's rich cultural history and prowess. Based on the UAE's belief in preserving and developing cultural and heritage sites, we have committed ourselves to carrying out projects with various French cultural institutions, to ensure that these sites continue to present the beauty of human civilisation."

"Today," His Highness said, "represents the strong ties between the UAE and France in the cultural preservation sector, which dates back to 2007, when the Emirate of Abu Dhabi and France signed an agreement, and has since then seen the opening of the Louvre Abu Dhabi in 2017 on Saadiyat Island's Cultural District." 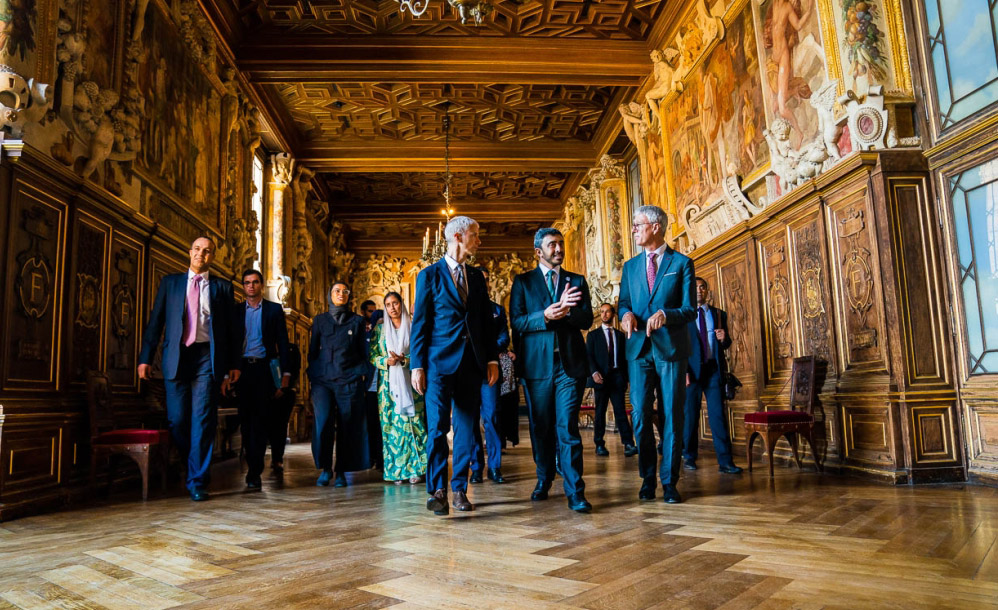 The Château de Fontainebleau, is listed as a UNESCO World Heritage Site, Sheikh Abdullah continued, noting that the historic palace served as a residence for the French monarchs from Louis VII to Napoleon III. "And while the Palace grounds are of historic significance, its is the lessons and human values created on these grounds that are of vital importance, whether through the arts, literature, philosophy and poetry, it is vital for us to carry forward these human links, and learn from them, especially during times of war, terrorism and extremism."

Sheikh Abdullah added, "For us in the UAE, preserving a nation's heritage and culture and presenting it to the youth and future generations is of vital importance and a key focus area for the UAE leadership.

"We cannot teach values of tolerance, if we cannot present to individuals the beauty in celebrating diversity. Individuals who visit museums will only be made aware that human civilisation and its development came about as a result of intellect and growth through varied means of thinking, production, and ingenuity.

"Here, I note the French philosopher, Michel de Montaigne, whose works adorn the Louvre Abu Dhabi's walls. Born in the 16th Century, he taught us the importance of tolerance, and how individuals should engage with respect, reasonableness and civility," His Highness continued.

Sheikh Abdullah went on to assert that the UAE will continue to stand by countries suffering as a result of natural disasters and conflict, just as it will continue to support the arts, culture, and history across the world.

He noted that ensuring due care for the preservation of cultural and heritage sites is a global societal duty, and that "we need to remind ourselves and the international community to abide by it. Society cannot prevail without the arts."

For his part, Mohamed Khalifa Al Mubarak, Chairman of DCT Abu Dhabi, said, "The inauguration of the Sheikh Khalifa Bin Zayed Al Nahyan Theatre at the Chateau Fontainebleau presents yet another cultural achievement resulting from the close ties between France and the UAE, further emphasising the crucial role cultural diplomacy plays in the preservation of the world's cultural heritage not only in times of peril, but also of peace.

DCT Abu Dhabi is committed to the protection and promotion of cultural heritage around the world, due to the rich, universal value it brings not only to local communities but to the global community as a whole, he added. "The reopening of this historical theatre further underscores the influential role played by the UAE in stimulating joint collaborations that result in positive, tangible change."

"Abu Dhabi has a mission to preserve and promote culture, not just locally but on a regional and international scale. If we are to progress as an increasingly global society, we must look outward and realise that all cultural heritage has a great and equal value, and the preservation of our shared histories is essential for the passing on of precious knowledge and skills to future generations," Al Mubarak continued.

"The renovation of the Sheikh Khalifa bin Zayed Al Nahyan Theatre represents our commitment to heritage preservation, and our strong belief that culture unites us all as a catalyst for tolerance and understanding," he concluded.

A designated UNESCO World Heritage Site, the Château de Fontainebleau was home to 34 French monarchs and emperors, and hosts 1,530 invaluable artifacts and items of rare furniture. It was there that Napoleon bade farewell to his Old Guard and went into exile in 1814.

With modifications of the château's structure, including widening the cobblestone entrance to fit his carriage, Napoleon helped make the building the place that visitors experience today.

Fontainebleau was the setting of the Second Empire court of his nephew Napoleon III. The château is also home to the Ecoles d'Art Americaines, a school of art, architecture, and music.