Following is the full text of the statement: At the invitation of President Joko Widodo of the Republic of Indonesia, His Highness Sheikh Mohamed bin Zayed Al Nahyan, Crown Prince of Abu Dhabi/Deputy Supreme Commander of the United Arab Emirates Armed Forces, visited Indonesia on 24 July 2019. On this occasion, President Joko Widodo and Crown Prince Mohammed bin Zayed Al Nahyan held a meeting at the Presidential Palace in Bogor on 24 July 2019.

The visit was historical and important milestone of the long-standing and brotherly ties of friendship and bilateral cooperation between the two countries, founded upon close historical bonds, shared principles, mutual interests, and respect for each other’s sovereignty and territorial integrity, as well as common aspiration for international peace, stability and prosperity.

During the Visit, President Joko Widodo and His Highness Sheikh Mohamed bin Zayed Al Nahyan held a friendly, productive and constructive talk, as well as in-depth exchange of views, which lead to an important consensus and resolve to further strengthening bilateral, regional and international cooperation on a wide range of issues.

The two Leaders affirmed their commitment to increase collaboration between Indonesia and the UAE, taking advantage of the enormous opportunities for economic and development cooperation, as well as to fostering friendship and mutual understanding between the peoples of the two countries.

Both Leaders underlined the importance of enhancing economic cooperation. In this regard, they welcomed the signing of agreements in the economic sector, particularly the Agreement for Promotion and Reciprocal Protection of Investment, as well as the Amendment of the Agreement on the Avoidance of Double Taxation and the Prevention of Fiscal Evasion, which would further facilitate investment, trade, and other forms of economic cooperation between the two nations.

The Leaders gave particular emphasis on cooperation in the energy sector, both oil and gas, as well as renewable energy. The two Leaders welcomed the agreement between PT Pertamina and Abu Dhabi National Oil Company (ADNOC) on the establishment of comprehensive partnership, covering collaborations from upstream to downstream business activities that would create synergy between the two state-owned enterprises. Both Leaders also welcomed the cooperation agreement between PT Chandra Asri, ADNOC and OMV on the development of naphta cracker and petrochemical complex.

The two Leaders expressed mutual commitment to push for the realization of other cooperation in the development of infrastructure in Indonesia, which include, among others, seaports, airports, container terminals, and industrial zones. The Leaders were encouraged by the cooperation established by PT Pelabuhan Indonesia Maspion and DP World to develop and operate the Maspion Container Terminal in Gresik with a potential value of US$ 1.2 billion. The Leaders highlighted the need to establish investment cooperation in developing Indonesia’s new tourism destination, including in Mandalika. The Leaders also expressed support for Indonesia’s state-owned construction companies’ interest to expand their participation in the development of infrastructure and construction projects in the UAE.

Both Leaders shared common drive to collaborate in promoting and developing the halal industry to take full advantage of the potentials and opportunities presented by the increasingly growing global halal market. In this regard, President Joko Widodo invited the Crown Prince to attend the upcoming Halal Industry Summit to be held in Indonesia in October/November 2020.

As part of the Muslim ummah, Indonesia and the UAE are committed to working closely in promoting Islamic moderation and spreading the message of peace, compassion and tolerance, to present the true meaning of Islam as rahmatan lil ‘ālamīn. The two Leaders were also committed to promote diversity and plurality, in the midst of growing intolerance, radicalism and extremism. President Joko Widodo commended the UAE Government for the resolve to establish UAE as a global capital for tolerance, through sustainable institutional efforts to instil the values of tolerance, dialogue, coexistence and openness in its society, signified in the proclamation of 2019 as the Year of Tolerance.

The Leaders exchanged views on regional and international issues of common interest, including cooperation to contribute to peaceful resolution of disputes within the region and beyond. Both sides underlined similar position and commitment in promoting sustainable and equitable development that foster peace and stability. Both Leaders also discussed issues related to the future of Palestine and their common support for the independence of the State of Palestine, in the border of 4 June 1967 with East Jerusalem as its capital, as the basis for the two-state solution.

Located in Bogor city centre, the botanical gardens adjoin the Bogor Presidential Palace, spanning an area of 210 acres, with thousands of different trees and plant species of various origins.

During the visit, Sheikh Mohamed bin Zayed and President Widodo planted a tree as a symbolic gesture of the deep friendly ties between the two countries.

His Highness left a note in the Bogo Palace VIP Visitor's Book, saying, "I was pleased to visit the friendly Republic of Indonesia, and to have met with President Joko Widodo. I would like to express my thanks and appreciation for the warm reception and hospitality received. The bilateral ties between our two countries are strong, and I hope that they continue to grow and progress in the future, in the interest of the two friendly nations and their peoples."

The two parties planted the Agathis dammara, an evergreen coniferous timber tree native to Indonesia's Moluccas, Celebes and the Philippines. The tree is a source of dammar gum, also known as cat-eye resin.

The agreements are as follows: 1) An agreement on the protection and promotion of investments was signed from the UAE side by Dr. Sultan Al Jaber, Minister of State, and Retno Marsudi, Indonesian Minister of Foreign Affairs.

2) A Memorandum of Understanding, MoU, for the establishment of a joint consular committee was also signed by Al Jaber and Marsudi.

3) An MoU in defence cooperation was signed by Al Jaber and Ryamizard Ryacudu, Minister of Defence of Indonesia.

4) An MoU in the field of fisheries on behalf of the UAE's Ministry of Climate Change and the Environment was inked by Al Jaber and Susi Pudjiastuti, Indonesia's Minister of Maritime Affairs and Fisheries.

5) An agreement to amend the Double Taxation Avoidance Agreement was signed on 11th November, 1995, by Al Jaber and Indonesia's Finance Minister, Sri Mulyani.

6) A cooperation agreement in the field of mutual administrative assistance in customs affairs was signed by Sultan bin Saeed Al Mansouri, Minister of Economy, and Mulyani.

8) An MoU on cultural cooperation was signed by Noura bint Mohammed Al Kaabi, Minister of Culture and Knowledge Development, and Muhadjir Effendy, Indonesia's Minister of Education and Culture.

10) A comprehensive strategic framework agreement in the field of refining, petrochemicals, retail, marketing of LPG and liquefied natural gas was signed by Dr. Sultan Al Jaber, Minister of State and ADNOC Group CEO, and Nicke Widyawati, CEO of Pertamina.

12) An MoU between DP World and Maspion Group was signed by Sultan Bin Sulayem, Group Chairman and CEO of DP World, and Alim Markus, President Director of the Maspion Group.

His Highness Sheikh Mohamed bin Zayed Al Nahyan, Crown Prince of Abu Dhabi and Deputy Supreme Commander of the UAE Armed Forces, has arrived in Jakarta, marking his state visit to the Republic of Indonesia.

Upon the arrival at the Soekarno-Hatta International Airport, His Highness Sheikh Mohamed bin Zayed was received by President Joko Widodo of Indonesia.

Sheikh Mohamed was accorded an official reception ceremony upon arriving with his entourage at the Bogor Palace where the national anthems of the two countries were played as the Artillery fired 21 rounds in salute of His Highness, who then inspected a Guard of Honour.

His Highness Sheikh Mohamed and President Widodo held official talks at the Presidential Palace in Bogor, on ways to further enhance the friendly and cooperation relations between the UAE and Indonesia, in addition to a number of regional and international issues of mutual interest. 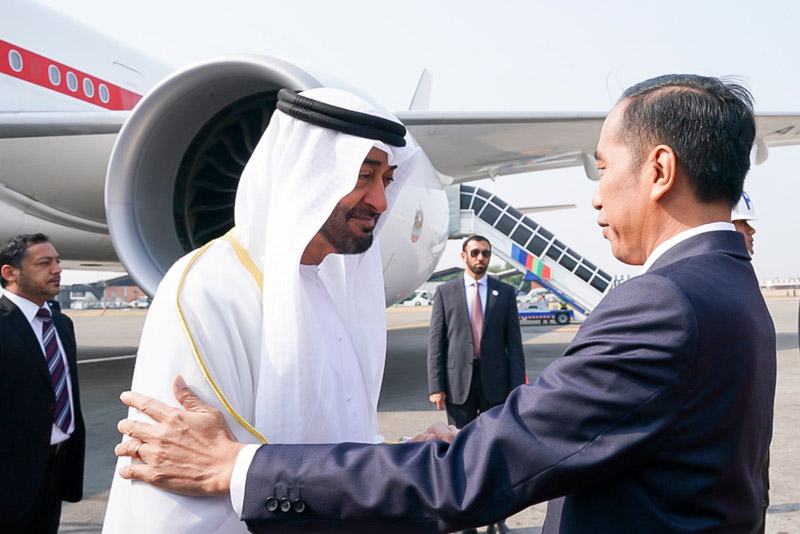 The meeting touched on cooperation between the two countries in the investment, economic, cultural, developmental and agricultural fields, in addition to many vital aspects that are of interest to both countries.

Sheikh Mohamed conveyed to the Indonesian President the greetings of President His Highness Sheikh Khalifa bin Zayed Al Nahyan, and his wishes for further progress, stability and prosperity to the Republic of Indonesia.

"The visit of the late Sheikh Zayed bin Sultan Al Nahyan to the friendly Republic of Indonesia in 1990 underscored the great importance the UAE leadership attaches to the UAE-Indonesian relations. These relations have witnessed growth and progress in various fields, and there is an Emirati vision for further developing these relations during the next stage," Sheikh Mohamed said.

"The UAE, under the leadership of His Highness Sheikh Khalifa, has great interest in strengthening relations and partnerships with the Republic of Indonesia in many important and vital areas, especially in the fields of oil, gas, renewable energy, agriculture, tourism, investment and others. The economic relations between the two countries have a lot of opportunities and elements of development and prosperity, which is important to invest in, in the future, to further strengthen development links," Sheikh Mohamed added.

For his part, the Indonesian President welcomed the visit of His Highness Sheikh Mohamed bin Zayed Al Nahyan to his country. He expressed confidence that the visit strongly supports the outstanding relations between the two countries and promotes cooperation and joint work between the UAE and Indonesia.

The Indonesian president also stressed his country's keenness to strengthen its relations with the UAE.

He called on the UAE investors to take advantage of existing investment opportunities in Indonesia, stressing the strong political will of his government to encourage investment.

The two sides highlighted the importance of consolidating and spreading the values of tolerance, cooperation and co-existence between the peoples of the world to enjoy security, stability and progress.

Sheikh Mohamed and President Widodo stressed the need for the international community to redouble its efforts to achieve peace and security in the region and the world.