President His Highness Sheikh Khalifa bin Zayed Al Nahyan has directed the immediate start of an air bridge to send urgent relief shipments of blankets, winter clothes and food supplies to help hundreds of thousands of refugees in Jordan and Lebanon, in addition to those affected in Gaza and other Palestine regions to help them survive the harsh winter. As temperatures are dropping below zero the entire Levant prepares for a powerful snowstorm that will bring heavy rain, hail and snow over the coming days.

Sheikh Khalifa said, "The UAE will remain committed to its humanitarian message and continue to be a global humanitarian capital and a major hub for helping those in need. To alleviate the suffering of hundreds of thousands of refugees during this winter is a moral obligation, an Islamic duty, driven by truly Emirati values that our founding fathers have instilled in all of us."

The President has invited all organisations and national bodies in the UAE to participate in this nationwide campaign that aims to involve all citizens and residents to contribute to alleviating the suffering of refugees during the harsh winter, saying, "The sons of the UAE are the sons of good and generous Zayed. We invite all our citizens and residents to participate in this national campaign to aid our refugee brothers and sisters suffering from harsh winter conditions in the Levant."

His Highness Sheikh Mohammed bin Rashid Al Maktoum, Vice-President and Prime Minister of the UAE and Ruler of Dubai, has also directed all concerned parties to start the immediate execution of the air bridge to transport urgent relief shipments, saying, "The UAE, under the leadership of His Highness Sheikh Khalifa, has been and will always remain a great supporter of refugees, never abandoning its humanitarian obligations and duties under any circumstances."

He added, "We cannot forget all the humanitarian causes that Sheikh Khalifa stands for. His compassion towards suffering people has always inspired the people of the UAE, and his efforts to be the first to help other nations in times of need has granted the UAE global respect and appreciation."

Sheikh Mohammed has also directed the formation of a special work force from the Emirates Red Crescent, Khalifa bin Zayed Al Nahyan Foundation, Mohammed bin Rashid Al Maktoum Humanitarian and Charity Establishment, the International Humanitarian City, and Dubai Cares. Effective immediately, the work force is to start transporting urgent aid packages to refugee camps in Jordan and Lebanon, in addition to those affected by the weather in Palestine and Gaza. The work force will also secure all that is required to protect refugees from the freezing cold during the coming days.

Sheikh Mohammed invited global and humanitarian organisations to stand by women and children in the refugee camps that are facing the harsh conditions of the devastating snowstorm, hitting great portions of the Levant over the next few days, where temperatures are expected to drop to -4 degrees centigrade with heavy snow, hail, and rain, and with wind speeds exceeding 110 Km/h.

He has also called upon all of the global and Arab media to act upon their responsibilities towards refugees and help in bringing their suffering to the world’s attention, adding, "I invite all my brothers and friends in the Arab and global media to focus on this tragedy and by doing so help the aiding of these refugees, especially women and children."

Snowstorm Huda is expected to arrive in Jordan, Palestine, and Lebanon today [Tuesday]. Specialised institutions in these countries have put in place emergency plans to deal with the storm. Wind speeds are expected to hit 110 Km/hour, with heavy snow fall on mountains, resulting in a severe wave of piercing cold across the affected region, with temperatures dropping to -4 degrees centigrade. 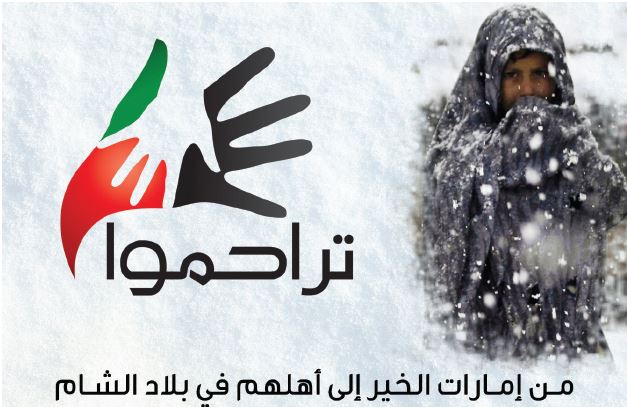 In accordance with directives from President His Highness Sheikh Khalifa bin Zayed Al Nahyan, and with follow-up by the His Highness Sheikh Mohammed bin Rashid Al Maktoum, Vice-President and Prime Minister of the UAE and Ruler of Dubai, and with the participation of all government departments and private sector institutions, the UAE is launching a campaign today (Wednesday) to raise funds for refugees and people in the Levant to help them survive the powerful snow storm Huda expected to hit the region in the coming days.

A national committee comprising representatives of government departments and national media outfits has been urgently formed to carry out the campaign, ‘Show Compassion’ (Tarahamu in Arabic). It seeks to provide  warmth for one million people, including refugees, affected by winter conditions.

Mohammed bin Abdullah Al Gargawi, Minister for Cabinet Affairs, said: "President His Highness Sheikh Khalifa bin Zayed Al Nahyan has directed the immediate start of the campaign and the involvement of all segments of the society in order to promote humanism, an integral part of the values of the UAE society."

"His Highness Sheikh Mohammed bin Rashid directed the immediate formation of a team representing all government departments, humanitarian agencies and media organisations in order to start the implementation of the directives of His Highness the President for the relief campaign to help people in the Levant who are affected by the winter weather in general and the forthcoming snow storm in particular."

The UAE humanitarian air bridge ordered by the President will start sending urgent relief shipments of blankets, winter clothes and food supplies to help hundreds of thousands of refugees in Jordan and Lebanon, in addition to those affected in Gaza and other Palestine regions, in cooperation with the Office of the United Nations High Commissioner for Refugees (UNHCR).

On Friday, all the local media channels will also air a unified broadcast to cover the events of the humanitarian fundraiser.

The campaign is aimed at helping one million people and refugees in camps in Jordan, Lebanon, Gaza and other Palestinian regions, to survive a harsh winter as the Levant countries brace for the devastating snow storm Huda which will sweep across the region in the next few days. The storm is expected to bring down temperatures to four degrees Centigrade below zero with heavy snow, hail, and rain, and with wind speeds exceeding 110 km/h.