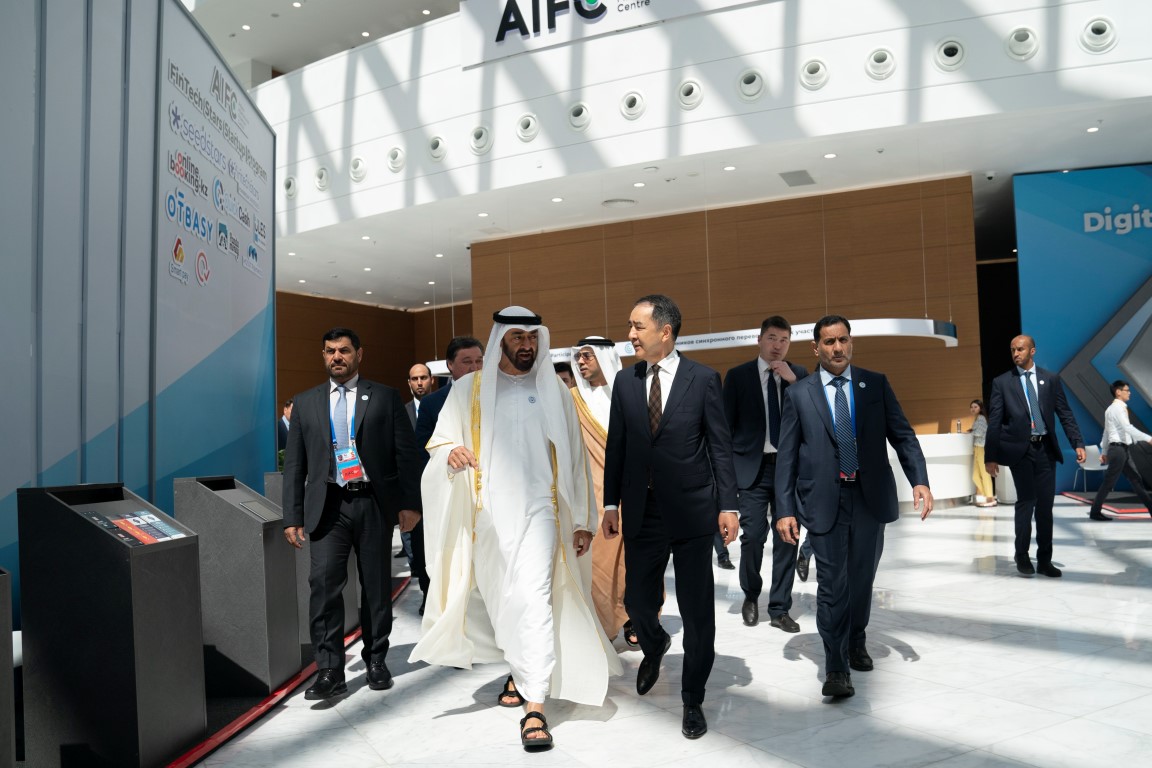 The President of Kazakhstan received His Highness Sheikh Mohamed, who was accompanied by H.H. Sheikh Mansour bin Zayed Al Nahyan, Deputy Prime Minister and Minister of Presidential Affairs, upon his arrival at the Centre.

The Kazakh President expressed his delight at Sheikh Mohamed's attendance of AIFC's inauguration, which he said was launched after examining the successful experiences of the financial markets in a number of countries, including the UAE.

In a speech delivered before senior international financial officials and guests, President Nazarbayev said that AIFC will serve Central Asian countries by supporting the development of the private banking sector, and opening investment opportunities. It will also facilitate the development of Green Finance, and support environmental-friendly investments.

He also pointed out that the official launch coincides with the 20th anniversary of the founding of the capital Astana, and is part of the country's continuous quest for modernisation and development.

AIFC - positioned as a financial hub for Central Asia, the Caucasus, the Eurasian Economic Union, the Middle East, Western China, Mongolia and Europe - is located at Expo 2017, and is equipped with modern infrastructure and advanced technologies. Another key strategic objective of the Centre will be to provide financial solutions as per Islamic laws.

His Highness Sheikh Mohamed bin Zayed Al Nahyan, Crown Prince of Abu Dhabi and Deputy Supreme Commander of the UAE Armed Forces, and his host President Nursultan Nazarbayev of Kazakhstan attended the signing ceremony of two agreements and a memorandum of understanding, MoU, in the capital Astana, on Wednesday.

The agreements aim to bolster joint partnership and cooperation and open up new prospects for joint work between the two friendly countries.

The first agreement on transfer of sentenced persons between the Republic of Kazakhstan and the United Arab Emirates was signed by UAE Minister of Justice Sultan bin Saeed Al Badi and Kazakh Prosecutor General Kairat Kozhamzharov.