His Highness Sheikh Mohamed bin Zayed Al Nahyan, Crown Prince of Abu Dhabi and Deputy Supreme Commander of the UAE Armed Forces, today received, at the Qasr Al Bahr Majlis, the UAE team of people of determination, who participated in the 9th Special Olympics Regional Games, as well as its administrative and technical bodies, the organising committee of the Games, which was hosted recently by Abu Dhabi, and the UAE Special Olympics Board of Directors. 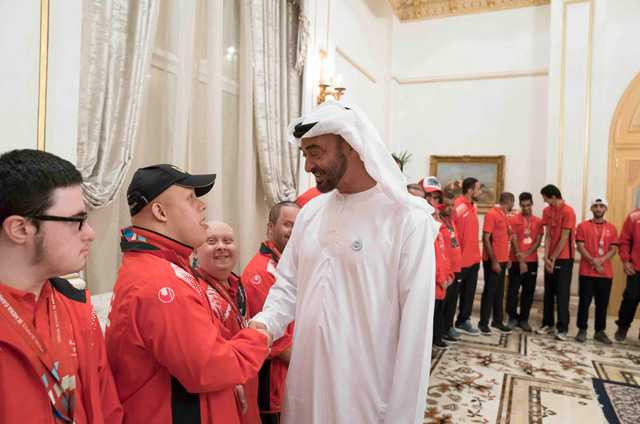 His Highness Sheikh Mohamed bin Zayed congratulated the team’s female and male athletes for their honourable results during their participation in the Games and other regional and international sporting events, where they proved their skills and worthiness to take leading places while praising their morale, determination and will to achieve the best results. 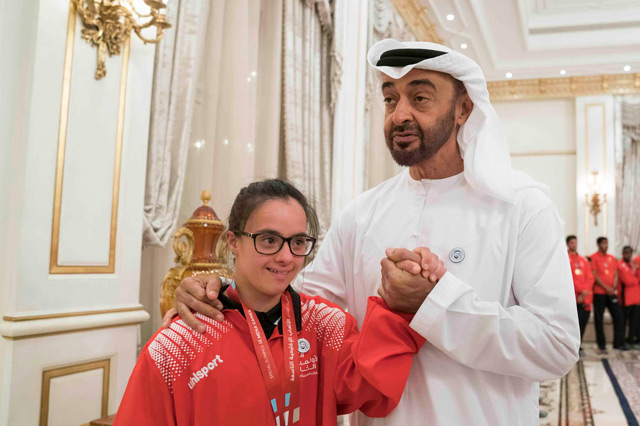 He also praised the role of the Organising Committee of the Games and the cooperation between various local, regional and international authorities, which resulted in a sporting event that fitted the UAE’s regional and international stature. He then called on everyone to continue their efforts to achieve further accomplishments during the country’s hosting of the Special Olympics World Games next year.

His Highness Sheikh Mohamed lauded the role of the team’s administrative and technical bodies and their efforts to help people of determination participate in sports, achieve victories and win titles. 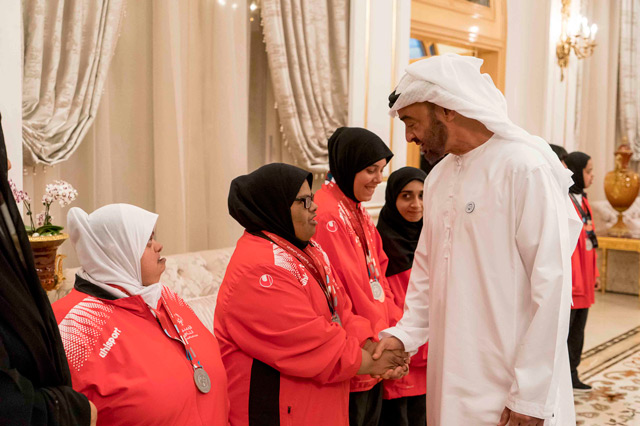 H.H. Sheikh Mohamed asserted that people of determination are appreciated and are a source of pride and honour for the country, under the leadership of President His Highness Sheikh Khalifa bin Zayed Al Nahyan, with their achievements that promote the country’s stature on the sports map in regional and international events.

Sheikh Mohamed said that this sports event contributed to strengthening the humanitarian, social and cultural ties between the people of determination and the individuals of the community from the different countries of the world.

He stressed that the spirit of pioneering and excellence of any community comes from its ability and success in investing in people and having confidence in their capabilities as they guarantee the present and future of a country. 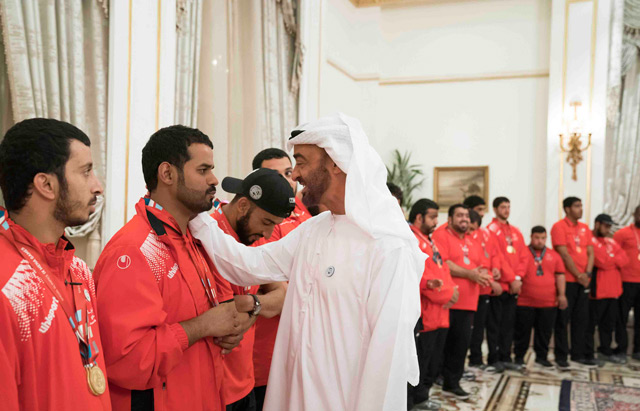 He further added that the real accomplishment is having the will to overcome challenges and obstacles to achieve aspirations, hopes, optimism and creativity. He highlighted the importance of supporting sports competitions and other events that strengthen opportunities to integrate the people of determination into the community and develop their will and ambition to overcome any constraints.

He valued the support and contribution of the partners and sponsors in the success of this sports event and other national events while wishing the "UAE Special Olympics Team" success and good luck for its participation in the World Games 2019.

The ninth Special Olympics Regional Games witnessed the participation of athletes from 31 countries who competed in 16 different sports held in eight locations in the capital Abu Dhabi. It represented the biggest sports event organised before the Special Olympics World Games to be hosted by Abu Dhabi in 2019.