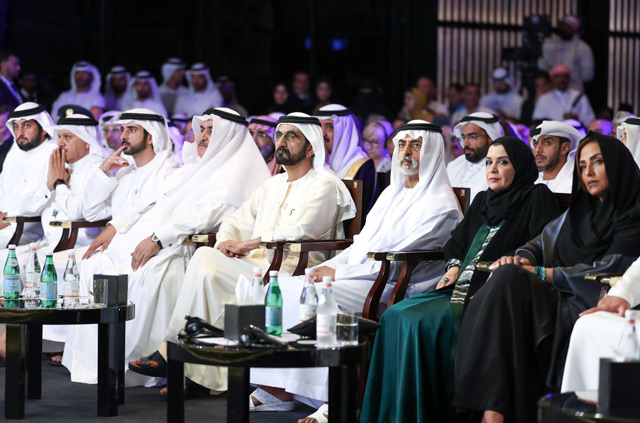 Held under the theme ‘Prospering from Pluralism: Embracing Diversity through Innovation and Collaboration’, the Summit brings together over 2,000 ministers and government leaders from around the world.

Sheikh Mohammed affirmed that the UAE is keen to provide a platform for productive discussions on enhancing peace and tolerance between nations. He also asserted that the UAE seeks to serve as a bridge between cultures and promote peaceful co-existence with the aim of ensuring happiness, stability and prosperity.

"We in the UAE aim to create a model for tolerance and positive coexistence and be a catalyst for building greater understanding between cultures. We will continue to contribute towards promoting global dialogue and goodwill between people of different nations, cultures and backgrounds," Sheikh Mohammed said.

Sheikh Mohammed said: "We have learned much from Zayed’s values and ideals, the most important of which is tolerance. The UAE accepts people from all backgrounds, and they all live happily and work together to build a better future."

His Highness added: "Tolerance is a force that drives the community forward. We teach our youth to welcome and respect diversity. The strong man is the one that is more capable of accepting diversity and disagreements."

Minister for Tolerance and Chairman of the Board of Trustees of the International Institute for Tolerance Sheikh Nahyan bin Mubarak Al Nahyan delivered a keynote speech titled ‘Collaboration and Innovation to Build a Society that Incubates Cultural Diversity’ in which he thanked His Highness Sheikh Mohammed bin Rashid Al Maktoum for his patronage of the event.

Speaking about tolerance in the UAE, Sheikh Nahyan said that its people are keen to practise tolerance and live according to high humanitarian, economic and social values. The people of the UAE have a strong bond with their leaders and all institutions in the country are united in fighting extremism and intolerance and promoting common human values.

He further said that God has blessed the people of the UAE with wise and sincere leaders, beginning with the nation’s founder, the late Sheikh Zayed bin Sultan Al Nahayan, who along with the other founding fathers, was open to the world and was always positive in his interactions with other cultures. Sheikh Zayed was totally committed to the values of tolerance, peaceful coexistence and equality. He also said that the country’s commitment to these values and principles has continued under the leadership of President of the UAE His Highness Sheikh Khalifa bin Zayed Al Nahayan, strongly supported by His Highness Sheikh Mohammed bin Rashid Al Maktoum, Vice President and Prime Minister of the UAE and Ruler of Dubai; His Highness Sheikh Mohamed bin Zayed Al Nahayan, Crown Prince of Abu Dhabi and Deputy Commander of the Armed Forces, and other leaders of the UAE.

"I stand before you today as an example of the commitment of the UAE to tolerance. Tolerance thrives on education, knowledge, communication, and the creation of local and global partnerships that can enhance hope in the future and promote peace, prosperity, and a dignified life for all," Sheikh Nahyan said.

He also said that the World Tolerance Summit signifies the UAE’s keenness to join other countries and international organisations to promote tolerance, pluralism, and peaceful and mutually beneficial relations between individuals, communities and groups both within and outside the country. He also said that the UAE is ready to share its positive experiences and promote a wider understanding of the universal power of tolerance. His Highness further said that the UAE is a leading country in fostering positive relationships between diverse cultures and beliefs.

The World Tolerance Summit brings together government leaders, key figures from the public and private sectors, peacekeeping ambassadors and change-makers from across the world to discuss the importance of tolerance, peace and equality, and celebrate diversity.