Vice President and Prime Minister of the UAE and Ruler of Dubai His Highness Sheikh Mohammed bin Rashid Al Maktoum said that technology is key to realising the UAE’s future vision to harness innovative solutions for the benefit of humanity. He said that realising this vision also requires the country to further strengthen its ties with international technology communities and major IT companies.

His Highness said that the UAE seeks to promote a constructive dialogue with international players on enhancing human progress across all sectors including information technology, which is critical to building our capabilities to face future challenges and achieve sustainable development.

Sheikh Mohammed said that Dubai has cemented its position as a hub for technology developers from across the world, and established partnerships with many players in the sector. This happens at a time when Dubai is strengthening its capabilities and developing its technology infrastructure as well as deploying the latest smart solutions to achieve its objective of becoming a smart city of the future.

Sheikh Mohammed, accompanied by Deputy Ruler of Dubai H.H. Sheikh Maktoum bin Mohammed bin Rashid Al Maktoum, went on a tour of the stands at GITEX that are showcasing some of the most cutting-edge technologies being implemented by organisations from the Middle East, Africa and South Asia.

His Highness was keen to meet with senior officials of international companies attending the trade show. He started with Microsoft, which has participated in all 38 editions of the event. Microsoft’s Regional Director briefed His Highness about the company’s investment plans in the UAE, where it plans to set up a global data centre, the first of its kind in the Arabian Gulf region. 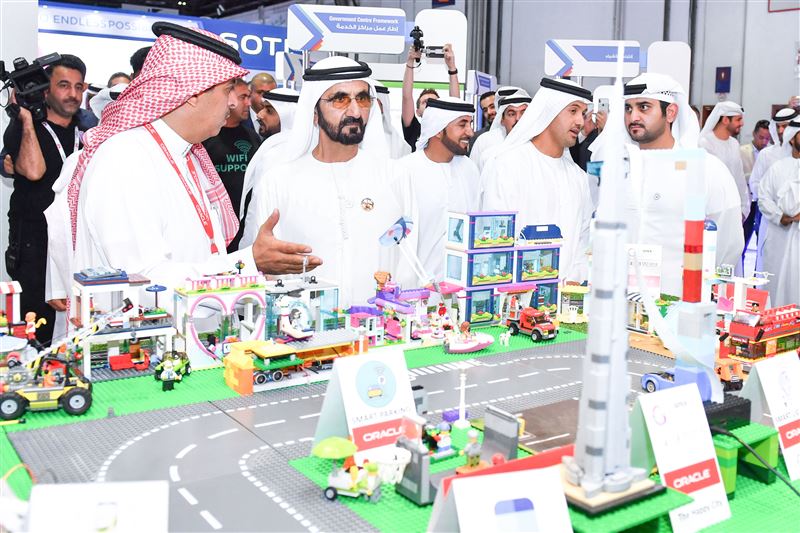 Sheikh Mohammed also visited the pavilions of DU and Etisalat, where he was briefed about their innovative offerings including Etisalat’s autonomous flying car, and Du’s home security solutions.

His Highness visited the third edition of ‘GITEX Future Stars’, a conference primarily aimed at startups, which features the participation of 700 companies from the UAE and 75 other nations. He met with young participants and learned about their ideas and innovations.