The Vice President, Prime Minister and Ruler of Dubai, His Highness Sheikh Mohammed bin Rashid Al Maktoum, visited the 44th Arab Health Exhibition, which is being held at the Dubai World Trade Centre. 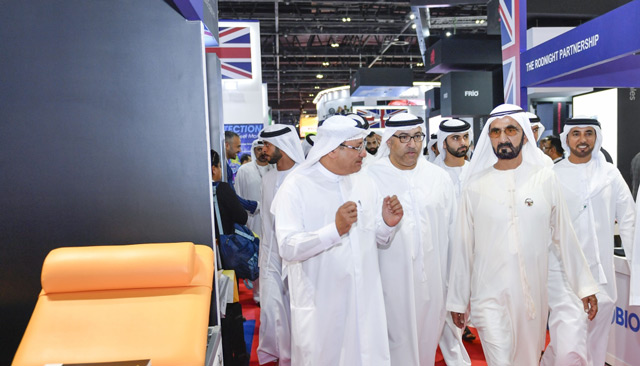 His Highness Sheikh Mohammed bin Rashid toured the four-day exhibition, which is hosting many major international companies in the healthcare sector that are showcasing their medicines and medical equipment and services.

Sheikh Mohammed began his tour at the Zaabeel Hall, which is hosting several global companies that are exhibiting their latest products that meet the highest international healthcare standards.

His first stop was the pavilion of Siemens, which is showcasing its latest device known as the "Digital Twins" that is used for surgeries in hospitals. 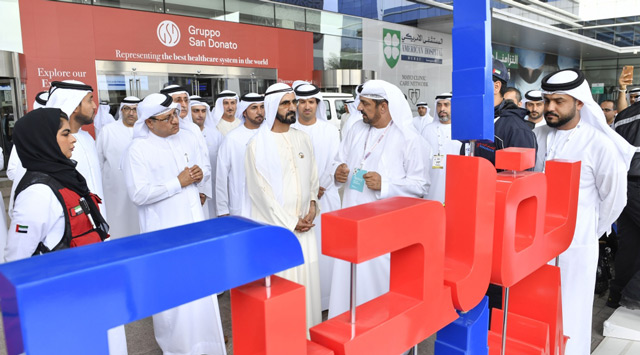 He then stopped at the pavilion of the Dr. Sulaiman Al Habib Hospital and listened to a presentation by Dr. Al Habib about his investments in the UAE, especially in Dubai.

In Hall No. 3, H.H. Sheikh Mohammed learnt about the programmes of the Ministry of Health and its new initiative, titled, the "Smart Health Gate," which it is implementing in cooperation with the Federal Authority for Identity and Citizenship and the General Directorate of Residency and Foreigners Affairs. He then launched the ministry’s "National Organ Donation Programme Initiative." Sheikh Mohammed also visited the pavilion of the "VPS Medicine Factory" and listened to a detailed presentation about its operations and Emirati-made products.

He then visited the Dubai Health Authority’s pavilion and was briefed by its doctors and officials about its latest initiatives, smart solutions and its "Smart Delivery System," A1.

Sheikh Mohammed also learnt about the authority’s initiative to launch the Dubai Dental Hospital and viewed the first environmentally-friendly electric motorcycle of the Dubai Corporation for Ambulance Services.

While continuing his tour, Sheikh Mohammed was briefed about the "From Dubai to the World Initiative," which aims to manufacture primary ambulatory materials, in cooperation between the corporation and "LMTR."

Sheikh Mohammed was keen to visit the exhibition, which is the second largest health and medical exhibition in the world.

He also expressed his happiness at witnessing the international gathering, which reflects the belief of participating countries and their public and private sector companies in the importance of the exhibition to the marketing of their medical products and innovations. 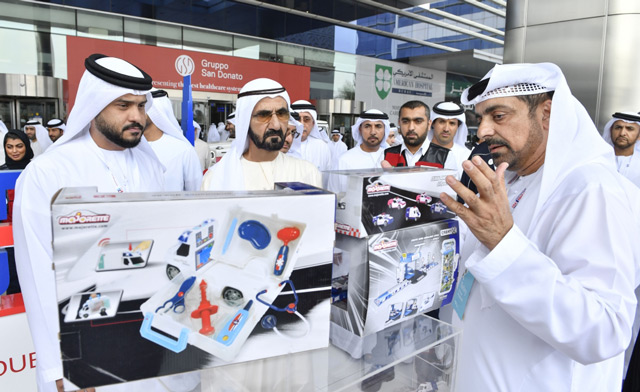 Sheikh Mohammed welcomed the event’s exhibitors, visitors and investors, who expressed their trust in the UAE’s institutions and laws, which serve and protect investors and provide them with a safe environment with economic potential.

He was accompanied during his tour by several Sheikhs, as well as under-secretaries and directors of departments from the Ministry of Health and the Dubai Health Authority.