Nearly 400 people were killed when a powerful quake sent a tsunami barrelling into the Indonesian island of Sulawesi, officials said Saturday, as hospitals struggled to cope with hundreds of injured and rescuers scrambled to reach the stricken region.

The national disaster agency put the official death toll so far at 384, all of them in the tsunami-struck city of Palu, but warned the toll was likely to rise.

In the city - home to around 350,000 people - partially covered bodies lay on the ground near the shore, the day after tsunami waves 1.5 metres (five feet) came ashore.

There were also concerns over the whereabouts of hundreds of people preparing for a beach festival due to start Friday evening, the disaster agency said.

Hospitals were overwhelmed by the influx of injured, with many people being treated in the open air, while other survivors helped to retrieve the remains of those who died.

One man was seen carrying the muddy corpse of a small child.

The tsunami was triggered by a strong quake that brought down buildings and sent locals fleeing for higher ground as a churning wall of water crashed into Palu, where there were widespread power blackouts.

The death toll from Indonesia's quake and tsunami jumped to 384, the disaster agency said Saturday, as hospitals struggled to cope with hundreds of injured and rescuers scrambled to reach the stricken region.

So far, it said all the deaths were recorded in tsunami-struck Palu, a day after waves 1.5 metres (five feet) high slammed into the city of 350,000 in central Sulawesi island.

At least 48 people were killed by a quake-tsunami in an Indonesian city, the country's disaster agency said Saturday, announcing its first official death toll.

The agency added that another 356 people were injured in Palu on Sulawesi island where waves as high as 1.5 metres (five feet) slammed into the city of about 350,000 people.

Indonesia was struck by a powerful 7.5 magnitude earthquake Friday, the US Geological Survey said, but there were no immediate reports of deaths or injuries. 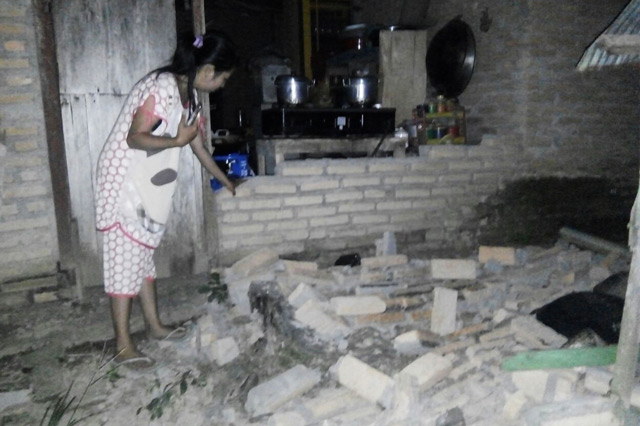 The country's national disaster agency briefly issued a tsunami warning before cancelling it.

The strong quake hit central Sulawesi island at a shallow depth of some 10 kilometres (six miles), just hours after a smaller quake killed at least one person in the same part of the country.

The latest quake was a higher magnitude than those that killed hundreds on the island of Lombok earlier this year.

Friday's tremor was centred 78 kilometres north of the city of Palu, the capital of Central Sulawesi province, but was felt some 900 kilometres south in the island's largest city Makassar.

"The last one was quite big," she said.

"Everyone was getting out their homes, shouting in fear."

Indonesia is one of the most disaster-prone nations on earth.

Indonesia was struck by a very strong 7.5 magnitude earthquake Friday, the US Geological Survey said, and the national disaster agency issued a tsunami warning.

The quake hit central Sulawesi island at a shallow depth of some 10 kilometres (six miles), just hours after a smaller quake killed at least one person in the same part of the country.

Indonesia's disaster agency issued a tsunami warning for the west coast of Sulawesi and east coast of Indonesia's part of Borneo island.