'It was terrifying': Students reel from latest US school shooting

Evan San Miguel, a freshman at Santa Fe High School, said he was in his art class early Friday when a fellow student burst in and yelled "Surprise!"

Then the shooting started.

"It was terrifying, terrifying," Evan recalled hours later. "I didn't even know if I was going to make it home or not."

The 15-year-old was among hundreds of students, distraught parents, residents, grief counsellors, and politicians who gathered for a sunset vigil in this tight-knit rural community near Houston that became the scene of the latest US school massacre.

Just hours after a teen gunman killed 10 people, mostly fellow classmates, and wounded 10 others, they came together near the school to light candles, pray for strength, weep for their fallen friends, and recall the morning's horror.

Evan and friends were startled when a fellow student, identified as Dimitrios Pagourtzis, burst into the class, then they recoiled at the carnage that unfolded.

"When he opened the door to shoot Kyle, he was like 'Surprise!' and then he shot him in the chest area," said Evan, who described how a bullet grazed his left shoulder. His knee, cut by broken glass, was also bandaged.

When the shooter left their classroom, Evan and other survivors barricaded the door and waited for police, who eventually helped them evacuate to safety.

Pagourtzis, a 17-year-old 11th grader at the school, is being held on capital murder charges. 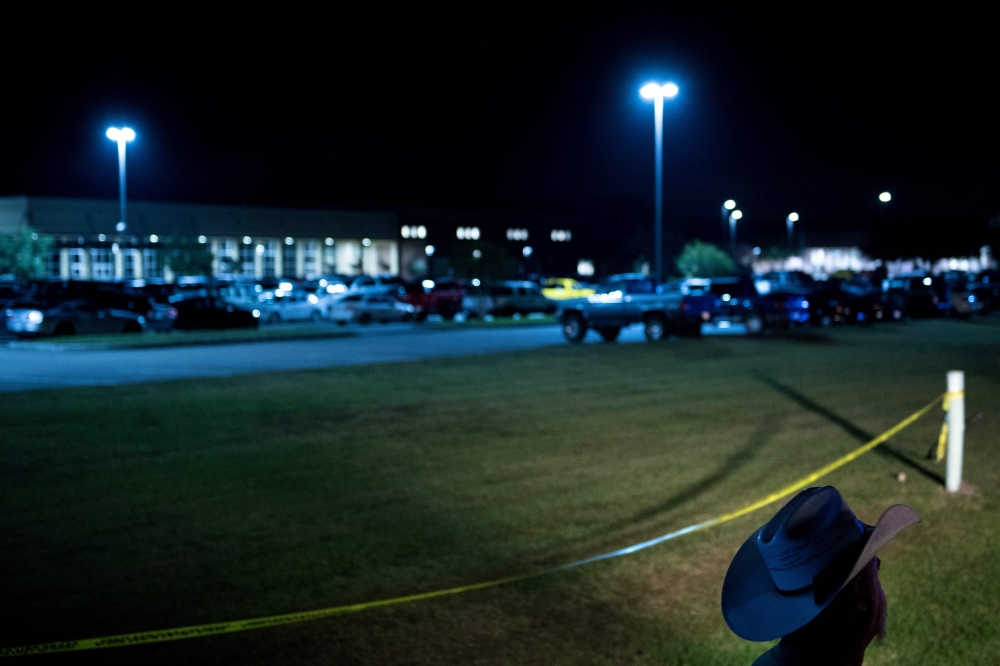 Sophomore Bailee Sobnosky was at the back of the school when she heard the gunshots. Having experienced a school lockdown just three months earlier, she said she wasted no time running across the street to a nearby gas station.

"I still don't feel safe," the 16-year-old told AFP after the vigil, acknowledging she was likely in shock from the tragedy.

"I feel like this will really rock the community, and it'll be hard to ever go back to any type of normal again."

Sobnosky said she did not know the shooter, but had seen him around school. "He seemed like a nice kid," she said, although she believed he did not have many friends.

The teen recounted her story standing next to her dad, who wore a bright white cowboy hat and spat chewing tobacco onto the shoulder of the road.

Deep into early Saturday hours, FBI agents were seen conducting an investigation at a blue trailer home that is believed to be connected to the suspect.

Outside the school, still partially lit up at night, a cordon of yellow police tape warned off anyone who might seek to approach the buildings.

Two young women arrived, seeking to lay a bouquet of flowers nearby.

Kali Causey, 20, a graduate from nearby Clear Falls High School who came with a friend to pay their respects to those who died, said it was unfathomable that their community has become the next on a long and tragic list.

"They always used to talk about Columbine and how horrific that was. Sandy Hook," she said, referring to two of the deadliest US school shootings of recent years.

"But this is here, in your home town," she paused. "It hits close."

Causey dismissed the accusations that America's gun culture - prevalent in Texas to be sure - led to the killings.

"A lot of people just blame that, but it's a bigger picture," she said, pointing to social issues like bullying and mental health conditions that are slipping through the cracks.

"I think that impacts it more than the fact that guns are accessible," she said.

For a community plunged into grief, Causey said the most important thing she could do now was to just be there for the families in need.

"To sit in that anxiety and that heartbreak for so long and to then find out the worst part of it... I think you just have to put your arms around them as a community, and let them know that you're here," she said.