Manila has been hit by its worst water shortage in years, leaving bucket-bearing families to wait hours to fill up from tanker trucks and some hospitals to turn away less urgent cases.

Taps are dry from four to 20 hours per day in the homes of about half of the Philippine capital's roughly 12 million people due to rolling outages driven by a dearth of rain and inadequate infrastructure.

"I have learned to take a bath using only seven pitchers of water," Ricardo Bergado told AFP as he lined up with his buckets. "I even save the bath water to flush our toilet."

The shortages started hitting late last week, with some areas in eastern Manila seeing the supplies of water into their homes being completely cut off.

However, Manila Water Company, one of the capital's two suppliers, said it will now use rolling cut offs spread across the city to share the pain more evenly. 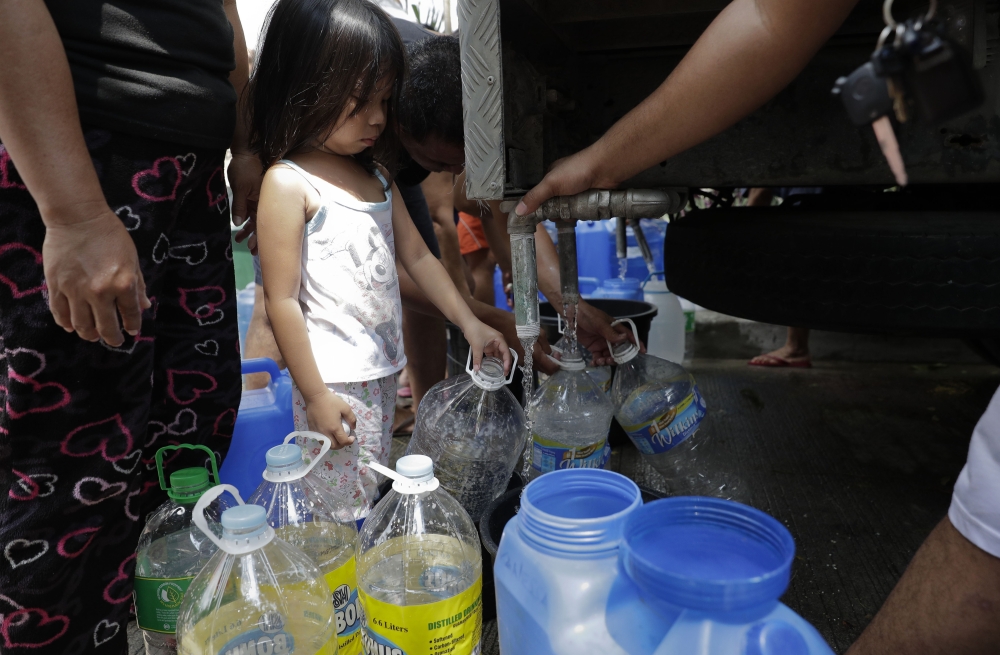 Jerry cans and buckets were flying off store shelves and landing in lines where families were spending hours waiting for deliveries by truck.

"Instead of doing important things, our time is consumed now by making sure we have enough water," Bergado, a 57-year-old audio-technician told AFP.

At least five public hospitals in the capital have started getting supplemental supplies from water tankers, as shortages had led at least one to limit admissions.

"This is the worst (water shortage) we have experienced. It almost happened last year but we were saved by heavy rains brought by storms," Dittie Galang, Manila Water communications manager, told AFP.

The disruption could last until July when monsoon rains are typically in full swing and would replenish regional reservoirs, one of which is at a two-decade low.

Better known for flooding from its frequent typhoons, the Philippines is experiencing a dry spell that led to reserves being severely depleted.

At the same time, the ageing pipelines and dams that provide Manila's water have not kept pace with the growth of the mega-city, which has roughly doubled its population since 1985.

The government has admitted that the problem of growing demand for water has long been forecast but they failed to address it due to delays in projects that would expand capacity.

"We need an alternative water source and we need it yesterday," Patrick Ty, chief of Metropolitan Waterworks and Sewerage System, told ABS-CBN television.

Among the main projects in the pipeline is the construction of $355-million Kaliwa Dam, a Chinese-funded project.