Mohammed opens Museum of the Future in Dubai

His Highness Sheikh Mohammed bin Rashid Al Maktoum, Vice-President and Prime Minister of the UAE and Ruler of Dubai, yesterday inaugurated the Museum of the Future at the Madinat Jumeirah in Dubai.

Organised by the Dubai Foundation for the Museum of the Future as part of the World Government Summit 2016, the museum focuses on shaping the future of robotics and artificial intelligence and their impact on human life. 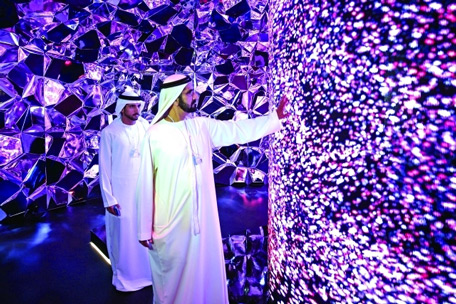 It also offers a unique interactive experience to visitors by attempting to explore the future of this sector.

His Highness Sheikh Mohammed bin Rashid Al Maktoum will also officiate the opening of the fourth World Government Summit when it gets underway today (8 February) under the theme ‘Shaping Future Governments’.

Speaking on the eve of the summit, His Highness Sheikh Mohammed bin Rashid Al Maktoum said: "Through the World Government Summit, the UAE seeks to provide a platform that opens a window to the future and attracts experts, decision makers, entrepreneurs, and innovators to share insights and knowledge about what is good for all of humanity."

He added: "We have directed to transform the summit from an annual event into an international organisation that works throughout the year and focuses on shaping and foreseeing the future in all sectors.

“It will also focus on producing knowledge for future governments, launching reports and global development indicators, and building partnerships with international organisations.

“It will answer tomorrow’s questions and seek to build a better future to meet the demands of our societies and achieve happiness and sustainable development."

"Shaping the future cannot be done by just waiting for it but rather by utilising latest technologies and knowledge tools and meetings its challenges starting from today.

“This summit sends a clear message to the world that governments should own the necessary tools to enter the future, attain the aspirations of their people, and build balanced relations with other nations," he concluded.

The Museum of the Future explores the future of the robotics and artificial intelligence sector since it directly affects the social and economic components of societies, in addition to influencing the healthcare, education and other sectors.

The museum has three underlying themes.

It also looks to answer tough questions such as: ‘Will you replace your cardiac muscle if it means you will be able to live longer?’ ‘Will you add robotic parts to your children to improve their school performance?’

The Museum offers a glimpse into NewKnees that give their users superhuman abilities to run and jump.

It also features another smart technology to climb walls without falling - the GeckoTips technology containing nano-structural machines that are installed on fingertips and allow the human body to adhere to anything and climb walls.

Communicate via Social Media platforms without your mobile

Future social communication will offer innovative solutions that are beyond imagination.

Social media platforms will not be the only means to share human experiences.

Thanks to the EyeShare technology, users of social media platforms will be able to see what their friends and followers are watching through these sites at the same moment.

The Museum of the Future also features future technologies such as DreamStream, which allows individuals to design their dreams and share them with their friends and relatives.

In addition, the future promises a different kind of communication between human beings thanks to technologies like MoodView. This technology gives its users real-time analysis of people’s emotions and then provides instant feedback on what to say and how to act.

Another future technology achieves the dreams of millions by enabling them to be isolated from everything that bothers them and enjoy real moments of calmness. This can be done through temporarily switching off all incoming messages to the brain.

Learning languages is not a difficult task anymore thanks to the AutoLingua technology, which is a smart earpiece that enables users to learn languages quickly. It also provides instant translation of a language chosen by the user.

This year’s Museum of the Future showcases futuristic designs that take visitors into a journey that is unanticipated in the near future. Its content development process relies on analyzing data collected from visitors’ interactions to create futuristic reports that can propose policies and decisions so that world governments can maximise the benefits of this sector.

The Museum of the Future has opened at a time when the growing value of the global robotics and artificial intelligence market reinforces the need for developing this sector and its tools so it becomes a key part of the agendas of governments and entrepreneurs. These future technologies are set to become a catalyst of major changes in the future. It is also expected that the intelligence of a desktop computer will be similar to the human intelligence in the coming years.

Studies indicate that the next wave of deep disruptive technologies will create a global market valued at US$8.7 trillion by 2025. This reflects the growing importance of such sectors and their increasing role in changing the lives of societies.

The Museum of the Future allows free entry to the public from 6pm to 8pm. This is the first time that it welcomes the general public, allowing students, researchers, and everyone who is interested to experience an interactive journey that foresees the future of robots and artificial intelligence and their impact on human life as well as on government and non-governmental sectors.

His Highness Sheikh Mohammed bin Rashid Al Maktoum, Vice-President and Prime Minister of the UAE and Ruler of Dubai presided over the inaugural meeting of the Humanitarian Consultative Council (HCC), which was held yesterday at Mina Al Salam Hotel in Dubai.

Following the meeting, Sheikh Mohammed launched the 'Dubai Humanitarian Statement,' which reiterated the UAE's readiness to face all regional and global challenges on social, humanitarian, economic and developmental fronts.

"Inspired by the determination of our wise leadership and the legacy of our founding father, the late Sheikh Zayed bin Sultan al Nahyan, we continue the journey of excellence which enabled the UAE to become the world's largest foreign aid donor, relative to gross national income," he said.

Sheikh Mohammed underlined the increasingly growing global crises, with 21 disasters taking place last year, including 18 due to conflicts and three due to natural calamities.

He added that international funds covered only 35 per cent of emergency needs for over 20 million people who became refugees, while 60 million people were displaced around the world in 2015.

The meeting was attended by the members of the HCC, which is an initiative of the Dubai-based International Humanitarian City, part of the Mohammed bin Rashid Al Maktoum Global Initiatives Foundation.