High Court judge Cameron Mander made the order during a hearing in which 28-year-old Australian Brenton Harrison Tarrant appeared via video link from a small room at the maximum security Paremoremo prison in Auckland.

Mander said nothing should be read into his order for the mental health assessments, as it was a normal step in such a case. Lawyers said it could take two or three months to complete. 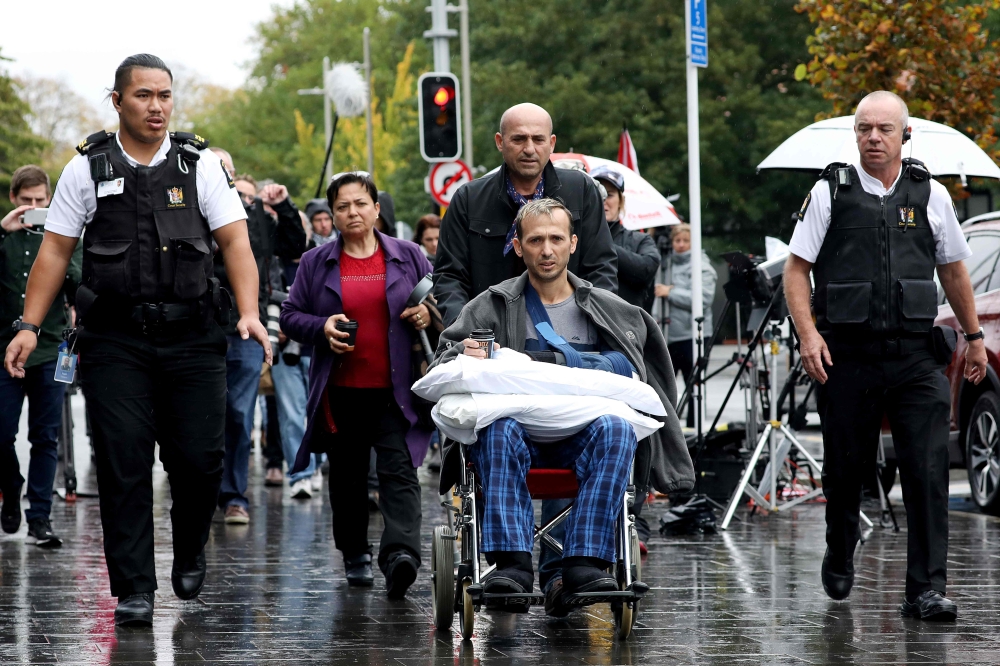 The judge said Tarrant was charged with 50 counts of murder and 39 counts of attempted murder. Police initially filed a single, representative murder charge before filing the additional charges this week.

Tarrant was wearing handcuffs and a gray-colored sweater when he appeared on a large screen inside the Christchurch courtroom, which was packed with family members and victims of the shooting, some in wheelchairs and hospital gowns and still recovering from gunshot wounds.

Tarrant had stubble and close-cropped hair. He showed no emotion during the hearing. At times he looked around the room or cocked his head, seemingly to better hear what was being said. The judge explained that from his end, Tarrant could see the judge and lawyers but not those in the public gallery.

Tarrant spoke only once to confirm to the judge he was seated, although his voice didn’t come through because the sound was muted. It wasn’t immediately clear if his link had been deliberately or inadvertently muted.

The courtroom was filled with more than two dozen reporters and about 60 members of the public. A court registrar greeted people in Arabic and English as the hearing got underway. Some of those watching got emotional and wept.

The day after the attacks, Tarrant dismissed an appointed lawyer, saying he wanted to represent himself. But he has now hired two Auckland lawyers to represent him, Shane Tait and Jonathan Hudson. The next court hearing was scheduled for June 14, and the mental health findings would determine whether he is required to enter a plea then.

Outside the courtroom, Yama Nabi, whose father died in the attacks, said he felt helpless watching.

“We just have to sit in the court and listen,” Nabi said. “What can we do? We can’t do nothing. Just leave it to the justice of New Zealand and the prime minister.”

Tofazzal Alam, 25, said he was worshipping at the Linwood mosque when the gunman attacked. He felt it was important to attend the hearing because so many of his friends were killed.

“It seems he don’t care what has been done. He has no emotion. He looks all right,” Alam said. “I feel sorry. Sorry for myself. Sorry for my friends who have been killed. And for him.”

The man accused of attacking two mosques in Christchurch last month will face 50 murder charges when he appears in court on Friday, New Zealand police said.

Australian Brenton Tarrant was previously charged with one murder as a holding measure, but police said Thursday that all the deaths and injuries in the March 15 attacks will be reflected in upgraded charges during his next appearance.

"The man arrested in relation to the Christchurch terror attacks will face 50 murder and 39 attempted murder charges when he appears in the High Court in Christchurch on Friday," they said in a brief statement.

Tarrant, 28, will appear via video link in the Christchurch court from a maximum-security prison in Auckland.

A note from the court this week said the appearance was likely to be brief and would "ascertain the defendant's position regarding legal representation" and other procedural matters.

Tarrant sacked a court-appointed lawyer after his first court appearance on March 16, raising fears he wanted to represent himself and attempt to use any trial as a propaganda platform.

The court said Tarrant would not be required to enter a plea during Friday's hearing.

The court has now barred media from filming or photographing the accused.

Police said further charges were being considered against Tarrant - a self-avowed white supremacist - but did not specify what they were.

They may relate to whether the court deems the attack a terrorist act, something Prime Minister Jacinda Ardern has repeatedly labelled the atrocity.

However, New Zealand's Terrorism Suppression Act, introduced after the 9/11 attacks, is little used and could complicate the prosecution.

Criminal charges, such as murder and attempted murder are easier to pursue, although prosecutors may want the accused tried as a terrorist to make the point that right-wing extremism is just as dangerous.

New Zealand's Corrections Department revealed last month that Tarrant was segregated from other prisoners and able to be observed constantly, either directly by staff via CCTV camera.

It said he had no access to television, radio or newspapers and no visitors.

Local media have reported that if convicted, he will likely face long-term isolation to prevent him being targeted by the largely Polynesian prison population over his white supremacist views.

New Zealand is in the process of tightening its gun laws after the attack and the government has also said it will review laws dealing with hate speech.

Ardern has called for action by social media giants after the alleged gunman livestreamed the attacks online.

The latest update from health authorities earlier this week said 24 people remained in hospital after the attacks, four of them critical, including a four-year-old girl.