'No injuries of concern' for Prince Philip, 97, after car crash

Queen Elizabeth II's 97-year-old husband Prince Philip visited hospital for "a precautionary check-up" on Friday that found "no injuries of concern" after a car crash the previous day that rolled the Land Rover he was driving.

"On doctor's advice the Duke of Edinburgh visited the Queen Elizabeth hospital... this morning for a precautionary check-up," a Buckingham Palace spokeswoman told AFP.

"This confirmed his royal highness had no injuries of concern," she added, without specifying the extent of any minor injuries.

This contrasted with a statement from Buckingham Palace on Thursday that stated the prince "was not injured".

The queen has issued no public comment about the crash.

The accident occurred near the queen's Sandringham Estate in south east England, where the couple spend much of the winter.

A nine-month-old baby who was in the back seat of the other car, a Kia hatchback, was also uninjured, while one woman in the vehicle broke her wrist and the other cut her knee, local police said, stirring a debate in Britain Friday about old age and driving.

"We are aware of the public interest in this case, however, as with any other investigation it would be inappropriate to speculate on the causes of the collision until an investigation is carried out," a police statement said.

Images published by the British media showed a dark Land Rover on its side by the curb, driver's side down, its windscreen smashed, glass and metal debris scattered across a road running by a leafy park.

"I was driving home and I saw a car, a black (Land) Rover come out from a side road and it rolled," witness Roy Warne told BBC Radio on Friday.

The Land Rover "was turning on its side over and over," he told The Sun newspaper in a separate interview.

He said one of the two women in the Kia "was the mother of the child and she was quite upset".

Philip and the other driver were given breath tests, which is standard police procedure. No alcohol was detected.

The accident made the headlines in most British papers.

"MY LEGS! MY LEGS!" The Sun splashed on its front page - the words Prince Philip reportedly "yelled" as he was pulled from the wreckage.

"I was blinded by the sun," the paper quoted him as saying.

Queen Elizabeth II's 97-year-old husband Prince Philip was "very shocked and shaken" after being involved in a car accident that left his Land Rover flipped on its side, a witness reportedly said.

The scene near to the Sandringham Estate where Britain's Prince Philip was involved in a road accident in Sandringham, England. Photo: AP

The duke emerged unharmed but two people in another car were injured in the crash that occurred Thursday when the duke was driving near the Sandringham Estate, according to police and Buckingham Palace.

Norfolk Police said two women - the driver and passenger of a Kia - required hospital treatment but were later discharged. It would not confirm reports that a baby was also in the car.

The BBC reported that Prince Philip's vehicle turned on its side after pulling out of a Sandringham driveway onto a main road and colliding with the Kia.

Witness Roy Warne, 75, told The Sun newspaper that the Prince was pulled from the wreckage "conscious" but "very shocked and shaken".

"I saw the car flip," he said, adding that he rushed to help free the driver before he "suddenly realised it was Prince Philip".

An image from the accident scene published by a local radio station showed two cars by the side of the road, one on its side with a smashed windscreen and another a few yards away in bushes.

"The Duke of Edinburgh was involved in a road traffic accident with another vehicle this afternoon," the palace said in a statement. 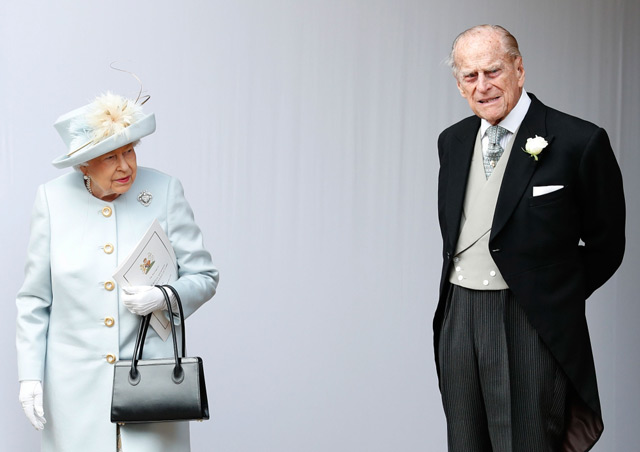 "The Duke was not injured. The accident took place close to the Sandringham Estate. Local police attended the scene."

She added that the duke saw a doctor "as a precaution" who confirmed he was not hurt.

Norfolk Police said, in accordance with policy in collisions, it breathalysed both drivers.

"We can confirm both drivers were breath tested and provided negative readings," the force added.

It said officers were called to the estate shortly before 3:00 pm (1500 GMT) "after a Land Rover and Kia were involved in a collision".

"The male driver of the Land Rover was uninjured," it added.

"The female driver of the Kia suffered cuts while the female passenger sustained an arm injury, both requiring hospital treatment".

The royal couple spend most of the winter at the residence in Norfolk, an English county northeast of London, which continues to operate as a sporting estate.

Philip, known for his forthright manner and off-colour jokes, formally retired from public life in 2017.

He has been seen behind the wheel on numerous occasions over the decade, including with world leaders and dignitaries as his passengers.

In 2016, alongside the Queen he drove former US President Barack Obama and his wife Michelle around Windsor Castle in a Range Rover after they landed nearby in the presidential helicopter.

Meanwhile the duke continued to compete in demanding carriage driving competitions into his 80s, and has previously pulled muscles in his back while driving his horse-drawn carriage.

Philip described in an interview how he took up carriage driving when he gave up polo aged 50, helping to establish it as a sport in subsequent years.

Born a prince of Greece and Denmark, he married then princess Elizabeth on November 20, 1947 at Westminster Abbey in London.

On their golden wedding anniversary in 1997, she said of him: "He has, quite simply, been my strength and stay all these years."