Passengers on a Southwest Airlines plane first heard a loud pop and then scurried away when they saw a jagged crack in a window that forced the jet to land in Cleveland on Wednesday. 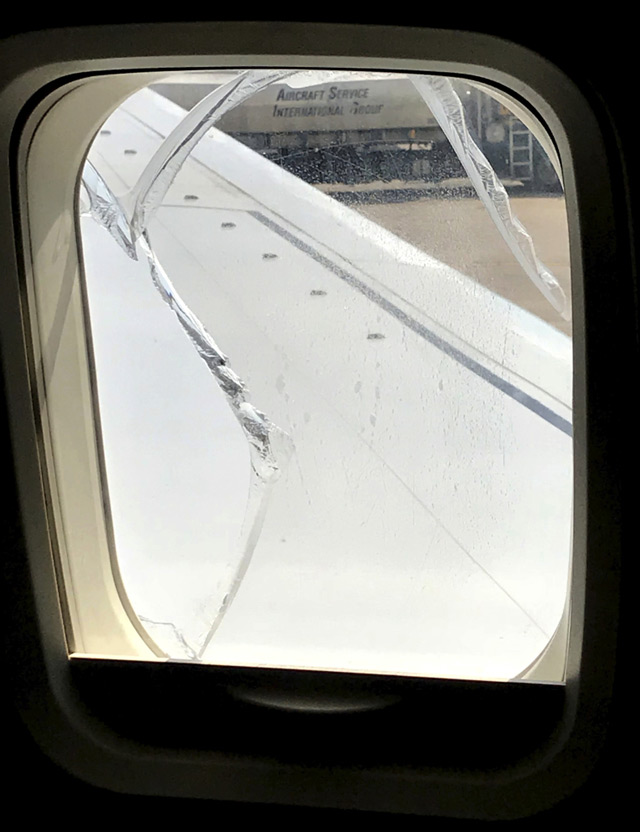 Some on board immediately thought back to just two weeks ago when a jet engine blew apart and broke a window in a deadly accident aboard another Southwest flight.

"It made you nervous because something like this just happened," said passenger Paul Upshaw of Chicago, who was about two seats from the window. "We didn't know if it was going to crack open."

There were no reports of injuries after Flight 957 heading from Chicago to New Jersey landed safely Wednesday after making an abrupt turn toward Cleveland while over Lake Erie, according to tracking data from FlightAware.com.

Some of the plane's 76 passengers told The Associated Press that the crew quickly checked the window near an emergency exit and handled the situation smoothly.

"People just started scattering," said Upshaw, who added there was no yelling or screaming. "We didn't panic."

Dallas-based Southwest said that the plane was diverted to examine damage to one of the three layers in the window, but didn't immediately release details on how it was broken. Photos taken by passengers and posted on social media showed one window with a large, jagged crack.

Southwest Airlines spokeswoman Brandy King said the plane never lost cabin pressure - which would have triggered oxygen masks to drop down for passengers - and that the pilots did not declare an emergency before landing.

There were no other mechanical problems with the Boeing 737, which was taken out of service, King said.

Rich Robinson, a sheriff's deputy from Sandwich, Illinois, said when the window cracked, everybody in that area hit the button for the flight attendant.

"She went running back right away, saw it, and everybody cleared out from those couple of rows," he said.

The timing of the incident could hardly be worse for Dallas-based Southwest, the nation's fourth-biggest airline. Airline executives said last week they have seen ticket sales slow since the April 17 engine failure than sent debris flying into a plane, breaking a window and killing a passenger, 43-year-old Jennifer Riordan of Albuquerque, New Mexico. Southwest estimates the drop in sales will cost it between $50 million and $100 million.

Robert Mann, an airline consultant and former American Airlines executive, said windows are periodically polished to remove crazing, the formation of tiny cracks from exposure to chemicals and the sun's rays. He said he couldn't recall a similar incident caused by crazing and that the pilots were right to make a quick landing.

The window on the flight that landed in Philadelphia blew out after being hit by a loose engine part. Riordan died of injuries suffered after she was partially sucked out.

After the Philadelphia emergency landing, the Federal Aviation Administration ordered inspections of more jet engines. The National Transportation Safety Board believes one of the blades snapped on the Southwest flight, hurling debris that broke a window.

Boeing declined to identify the supplier that manufactured the windows on its 737-700s, the model involved in Wednesday's incident and last month's fatal accident.