Bilal Mansoor Khawaja beams as he runs his palms over the ivory coat of a white lion, one of thousands of exotic animals at his personal "zoo" in Karachi, where a thriving wildlife trade caters to Pakistan's gilded elite.

"These are... (some) of the rarest animals I own," boasts the 29-year-old industrialist of his leashed lion.

Pakistani laws make it easy to import exotic animals, but once inside the country regulation is almost non-existent.

This has led to an untold number of such creatures - especially big cats, seen as symbols of wealth and power - being imported or bred across Pakistan in recent years, much to the horror of helpless wildlife officials.

Social media is littered with videos of wealthy Karachiites cruising with lions sitting in the front seats of luxury SUVs, while newspapers have featured reports of arrests of residents brazenly taking their big cats out for strolls and drives.

Khawaja estimates there are up to 300 lions within Karachi's city limits alone, kept in gardens, inside rooftop cages, and at farm houses across the sun-baked metropolis of about 20 million - notorious for its grinding traffic, crumbling infrastructure, and lack of greenspaces. 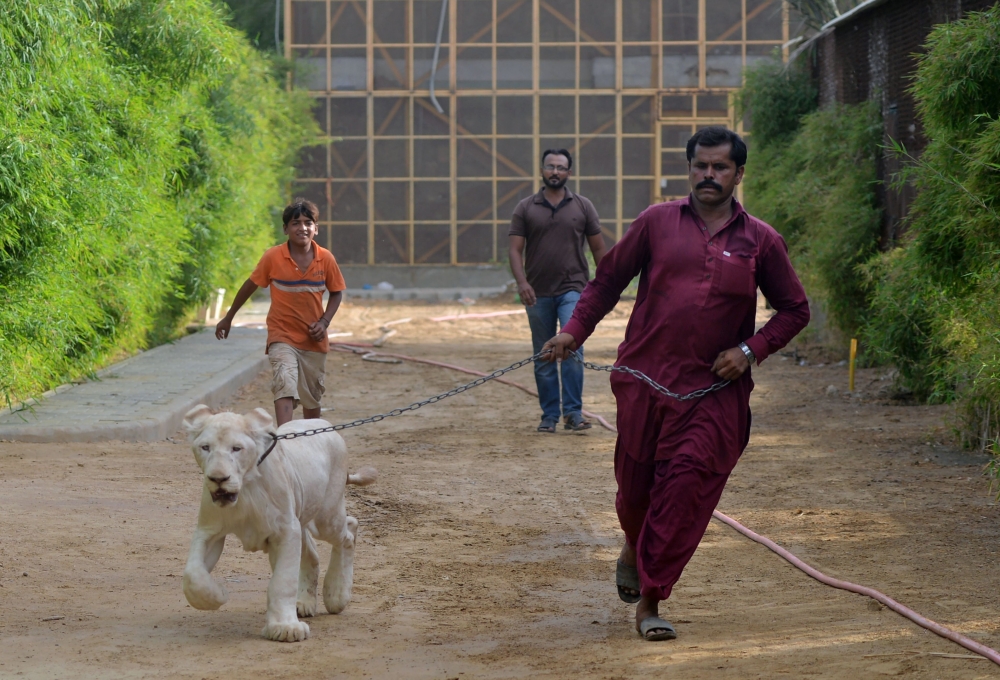 Khawaja calls his handful of lions and a tiger the "crown jewels" of a larger collection of more than 4,000 animals he has amassed in recent years.

He insists his collection - made up of some 800 different species - is not about status or prestige but simply a manifestation of his love for pets.

"We Pakistanis have a problem: where our heart is soft, it's very soft. Where it's hard, it's very hard," he gushes.

To care for his flock, he has more than 30 people working in shifts and four vets on staff.

The entire operation costs a fortune, Khawaja admits, although he refuses to provide an estimate of just how much he shelled out for his personal zoo.

But the cost and the series of minor injuries he has accrued over the years at the hands of his prized pets are well worth it, he claims.

"With every injury my love for these animals... grows more," he smiles.

His nine-acre property where a portion of his animals, including zebras, flamingos, and horses, reside is smack in the middle of a dense neighbourhood in the megacity.

Exotic animal dealer Aleem Paracha, who claims to be one of the top three importers of exotic animals in Karachi, says that for 1.4 million rupees ($9,000) he can deliver a white lion to a client in up to 48 hours - and do so entirely legally.

Certificates from the countries of origin along with permits from authorities are provided for any animal brought into Pakistan in accordance with an international treaty to protect endangered species.

But Paracha says there is also a network of breeders across Pakistan that can also provide lions at a moment's notice, including at least 30 in Karachi.

"In Karachi, lion farming is going very well," he explains.

And while indigneous species are fiercely protected in Pakistan, the same protections are not extended to imported animals.

The government has guidelines regarding the treatment and type of enclosures big cats and other exotic species should be provided with.

But "the law is silent" on breeding, explains Javed Mahar, head of Sindh province's wildlife department.

Uzma Khan, a technical advisor with the World Wildlife Fund, says there is not even an authority monitoring government-run zoos, which are notorious for neglect, let alone the private sector.

"There's lots of private breeders and they are very shady," Khan adds.

'The law is silent'

Meanwhile owners like Khawaja may have the means and passion to provide the hearty diet for their animals, but others have been known to fall short.

Karachi veterinarian Isma Gheewala says lions suffering from calcium deficiencies are common at her clinic, where she says she has treated between 100 to 150 big cats over the years.

"And even if they jump like a foot down, they will injure some bone or the other and then it takes a long time for the animals to recover."

But both Paracha and Khawaja dismiss claims they are doing anything harmful by taking exotic species out of their natural habit and raising them in Pakistan.

"A lot of animals, either they're extinct or they're on the edge of being extinct," argues Khawaja, adding: "I don't want the next generations to not see these animals."

But conservationists like Khan at the WWF dismiss such arguments.

She explains: "An animal in captivity is not the way it is in the wild.

"What's the point of having an animal which is not hunting, which is in a cage not showing its natural behaviour?"