In the ancient Phoenician Mediterranean port of Sidon in Lebanon, an old castle majestically straddles into the azure calm water.

Just across the road, a small falafel snack shop is seen packed with customers with an avid appetite for such fries.

The falafel shop is in sharp contrast with the sea castle which seems to have lost its lustre over the years because of the civil war and ensuing clashes from time to time.

Only a few people are seen trickling daily into the sprawling yellow castle, which had attracted thousands of Western tourists before the eruption of the civil war in 1975.

Despite massive social changes over the past two decades in the 6,000-year-old city, the Sidonians’ appetite for falafel appears to have not waned.

The dish has even become more popular and falafel shops are now the most profitable eateries.

“We can now hardly see any Western visitors because of the security situation. Most of the visitors now are local people but their number is very small,” said a castle guard, as he yawned and shifted in his chair inside a small room at the castle entrance.

“Can you see that falafel shop across the road, it attracts more people than the castle.

"I just can’t believe that people are now more interested in having a falafel sandwich than visiting this historical monument.”

Falafel is a deep-fried ball or patty made from ground chickpeas, fava beans, or both. It is a traditional Middle Eastern food, commonly served in a pita, which acts as a pocket, or wrapped in a flatbreadknown as lafa. 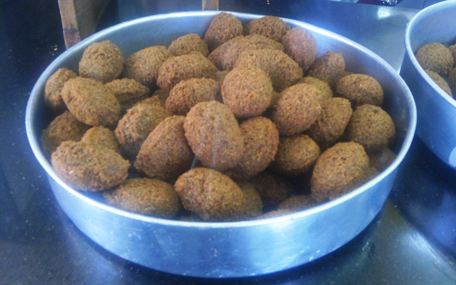 The falafel balls are topped with salad pickles, hot sauce, and drizzled with tahini-based sauces. They may also be eaten alone as a snack or served as part of appetizers.

At least 500 falafel snack shops operate in Sidon, which has a population of more than 250,000 people and is Lebanon’s third largest city after the capital Beirut and Tripoli in the north.

The city’s economy is now based mainly on farming and fishing after its tourism sector was hit by the civil war and other hostilities over the past 20 years.

The sea castle was built during the 13th century by the Crusaders as a fortress on a small island connected to the mainland by a narrow 100-metre-long roadway.

The island was formerly the site of a temple of Melqart, the Phoenician version of Heracles.

The beauty of the castle can be seen in old illustrations but after witnessing several wars, it has been damaged and renovated many times.

Another castle, called the land fort, is located just around 800 metres away on the fringes of old Sidon city, which is adjacent to the present city.

In Sidon, falafel is so popular that it is the dominant fast food business along with Manakeesh (cheese or meat pie), overshadowing other popular dishes as Shawarma, grills and pizza.

Contrary to other popular dishes, the Sidonians eat falafel at any time, including breakfast, lunch and dinner.

“Our shop is busy all the time, unlike other businesses which are either up or down, depending on the conditions and local demand,” said Abu Rami, the owner of the Abu Rami falafel restaurant near the sea castle.

When he was told that his shop attracts more customers than the nearby castle, he laughed and said: "That’s true, we receive an average 200-300 people a day but I don’t think the castle attracts that number. It's quiet most of the time.

"It’s not my fault that people here are fond of falafel more than of history.

"I think the government should consider turning the castle into a falafel restaurant.”