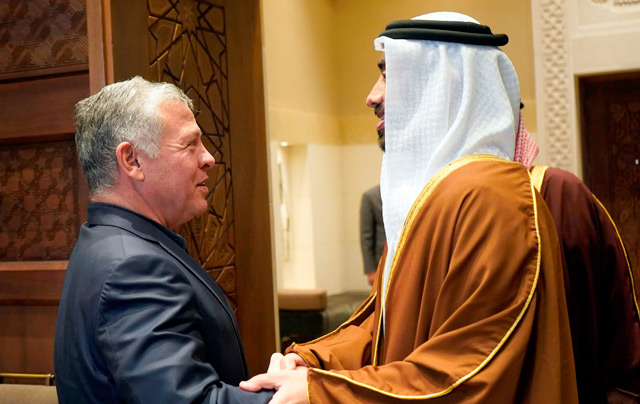 Their meeting took place during Sheikh Abdullah’s visit to Jordan, to participate in a consultative meeting that will be held tomorrow at the Dead Sea, in the presence of the ministers of foreign affairs of Saudi Arabia, Egypt, Kuwait, Bahrain and Jordan.

During their meeting, all sides highlighted the deep relations between Jordan and its Arab neighbours, and King Abdullah expressed his hope that the meeting will lead to positive outcome.

King Abdullah underlined the importance of joint coordination on various issues and crises that affect the region, which will strengthen joint Arab work and serve the interests of Arab countries and their peoples.

The meeting also addressed the Palestinian issue, and Jordan highlighted the necessity of ending the conflict between Palestine and Israel through the two-state solution and the Arab Peace Initiative, which is conducive to the establishment of an independent Palestinian State based on its 4th June, 1967, borders, with East Jerusalem as its capital.

The meeting was attended by Ayman Al Safadi, Minister of Foreign Affairs and Expatriates, Advisor to the King of Jordan and Director of his Office.