India on Monday launched a low-cost rocket on a historic bid to put a landing craft on the surface of the moon and join an elite space force.

A week after an initial launch was halted just before blast-off, Chandrayaan-2 - or moon Chariot 2 - took off from the Satish Dhawan Space Centre carrying national pride and the hopes of Indian scientists.

India is seeking to become just the fourth nation after Russia, the United States and China to land a spacecraft on the moon. If the rest of the mission goes to plan, the Indian probe will land on the lunar South Pole in early September.

"Every Indian is immensely proud today!," tweeted Prime Minister Narendra Modi, who has vowed to send a manned mission into orbit by 2022.

"Special moments that will be etched in the annals of our glorious history!" 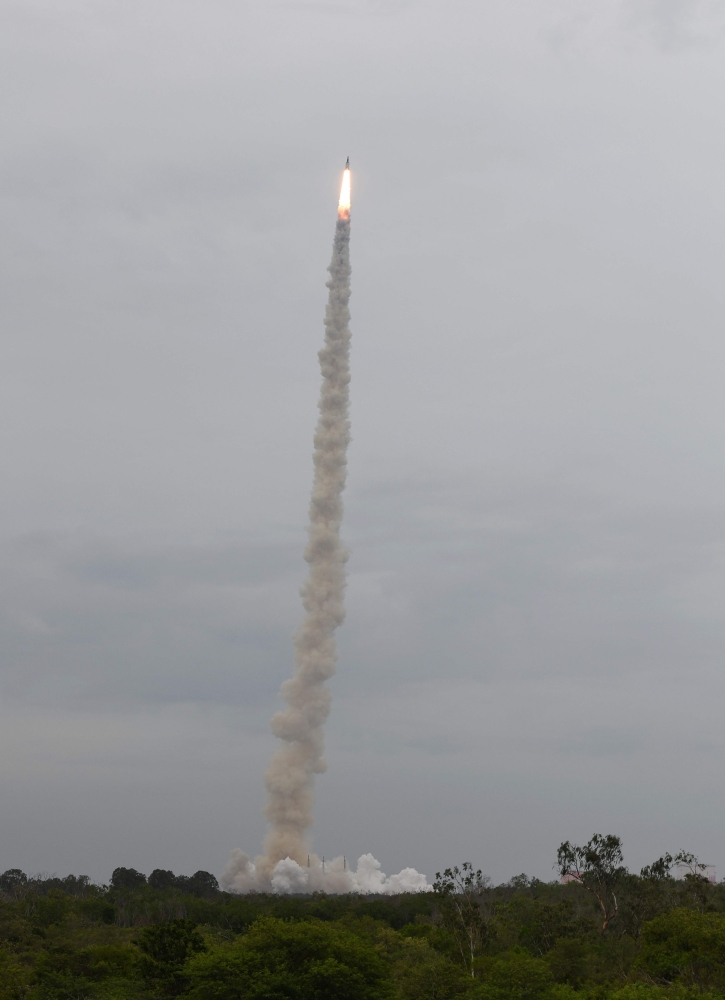 There were applause, handshakes and hugs in the mission control room as the rocket blasted off from the base on an island just off the coast of Andra Pradesh state.

President Ram Nath Kovind watched the launch alongside 7,000 dignitaries and flag-waving children, with the crowd bursting into cheers at the spectacle.

"Today is a historic day for space, science and tech in India," Indian Space Research Organisation (ISRO) chief K. Sivan said as he hailed the efforts made to fix a fuel leak that forced the earlier launch to be postponed.

India was also hailed by its international counterparts. The US state department said on Twitter that the launch was "an incredible achievement!" while the European Space Agency sent congratulations.

India counts down to new bid to launch Moon mission

Thousands gathered to witness India's second attempt to send a landmark spacecraft to the Moon on Monday, a week after a fuel leak forced the launch to be postponed.

Indian scientists offered ritual prayers at temples near the base, according to media reports, and said they were confident there would be no repeat of the problem that led to countdown being halted 56 minutes before last week's launch.

The South Asian nation is bidding to become just the fourth nation - after Russia, the United States and China - to land a spacecraft on the Moon.

With light rain falling on the Satish Dhawan Space Centre at Sriharikota, an island off the coast of southern Andhra Pradesh state, President Ram Nath Kovind joined 7,000 dignitaries and flag-waving school children waiting for the launch.

ISRO chief K. Sivan told The Hindu newspaper late Sunday that there was "no chance for any technical fault to arise now".

"When the technical fault happened, we stopped the countdown, identified the issue, and rectified it."

Destination Moon -The rocket will take up an orbiter, a lander and a rover, and has been almost entirely designed and made in India.

The 2.4-tonne (5,300-pound) orbiter is expected to circle the Moon for about one year, taking images of the surface, looking for signs of water, and studying the atmosphere.

The lander - named after Vikram A. Sarabhai, the father of India's space programme - will carry the rover and be placed on the surface near the lunar South Pole.

ISRO scientists will remotely control the rover named Pragyaan - "wisdom" in Sanskrit - as it carries out experiments.

It will work for one lunar day, the equivalent of 14 Earth days, studying rocks and soil on the Moon's surface.

Experts said setbacks such as the halt to the first launch were to be expected because of the complexity of the mission.

About $140 million has been spent on preparations for the mission, a much smaller price tag compared with similar missions by other countries.

The United States - which is marking the 50th anniversary of Neil Armstrong becoming the first human on the Moon - spent the equivalent of more than $100 billion on its Apollo missions.

Chandrayaan-2, and India's space programme as a whole, are a source of national pride.

Prime Minister Narendra Modi has vowed to send a manned mission into orbit by 2022, and India hopes to seek out commercial satellite and orbiting deals.

The new mission comes almost 11 years after the launch of India's first lunar mission - Chandrayaan-1 - which orbited the Moon and searched for water.